When Antje Springman and Dennis Minty spotted something huddled under the honeysuckle shrub outside their home along a river bank in Conception Bay North, they thought it was one of their chickens in distress.

Springman went out to investigate and discovered a very different type of bird — a Great Cormorant, a black seabird about the size of a goose, commonly called a shag in Newfoundland and Labrador.

“It has a very long neck and about a three-foot wingspan and a very long five-inch bill with a pretty sharp hook on the end, so I called out to Dennis to go and get me some welder’s gloves,” said Springman. 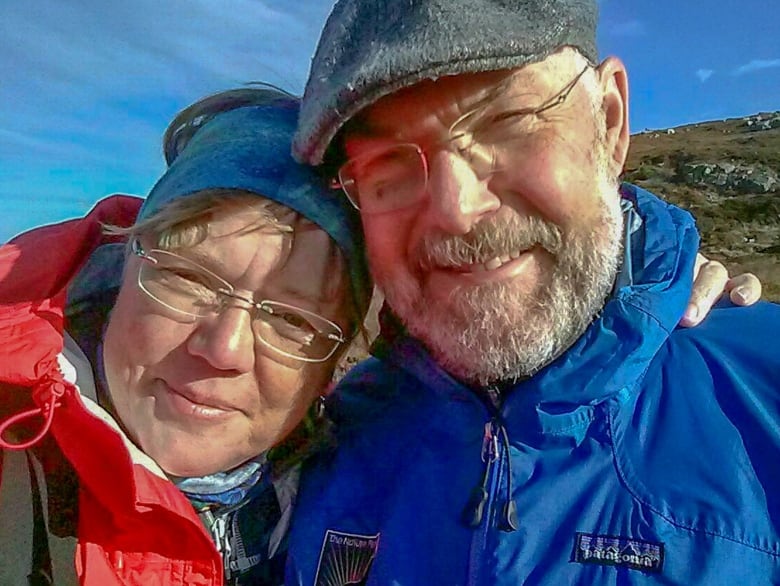 Antje Springman and Dennis Minty share a love of animals. They care for a dog, cat, chickens and sheep on their property and often help animals in need. (Submitted by Dennis Minty)

Cormorants are usually spotted on sea stacks or rocks on the coastline, which is about one kilometre from the couple’s home in South River.

‘We gave him a good feed that night and put him in an animal carrier.’ – Antje Springman

While they have seen the birds flying by or resting on the tidal estuary outside their house, they’ve never encountered one on the property.

“It was in a place that is not normal, the behaviour of that bird wasn’t normal and I knew it was in trouble.”

The bird hissed and snapped, but didn’t move when Springman approached, so she picked him up and brought him inside. 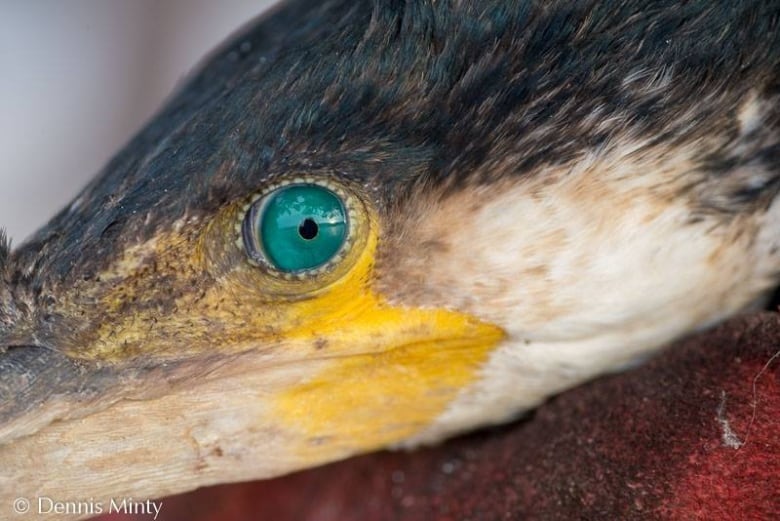 The image of the river is reflected in the eye of a Great Cormorant in this photo taken by Dennis Minty, a wildlife biologist who now works primarily as a nature photographer and author. (Dennis Minty Photograhy)

Minty — a wildlife biologist experienced in treating and rehabilitating animals during his 23 years with Salmonier Nature Park — said the bird was quite thin, but had no apparent injuries.

“We figured a bit of food and some quiet and warmth for the night was the ticket,” he said.

‘We gave it a good feed’

Cormorants are fish-eating birds, so the couple thawed out a tilapia fillet in the microwave and cut it into bite-sized pieces.

“I had to pry the jaws open and poke it down, but once it’s in the gullet they will swallow it, so we gave him a good feed that night and put him in an animal carrier and put him in a warm place in our front porch and covered him with a blanket and left him for the night,” said Minty. 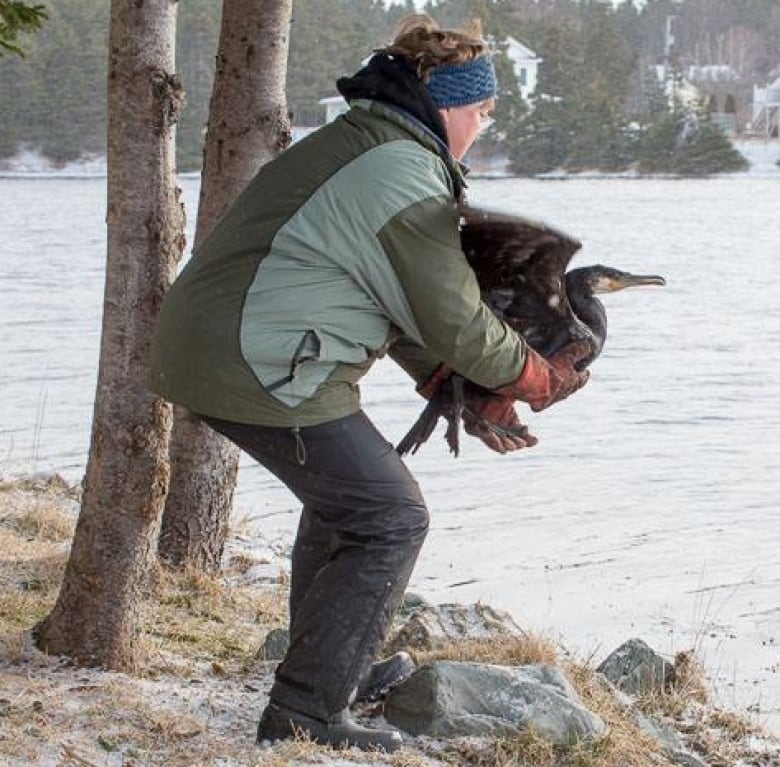 The meal and rest seemed to do the trick, as the seabird was far more lively come morning.

“We actually didn’t think he was going to make it through the night, but in the morning when Den had a look the bird just started snapping and sticking his beak out through the grate, trying to get him as he was getting closer, so we knew that he was feeling quite a bit better,” said Springman.

The family dog and cat stayed well away from the pungent visitor, and by morning Springman said the whole house smelled like fish. 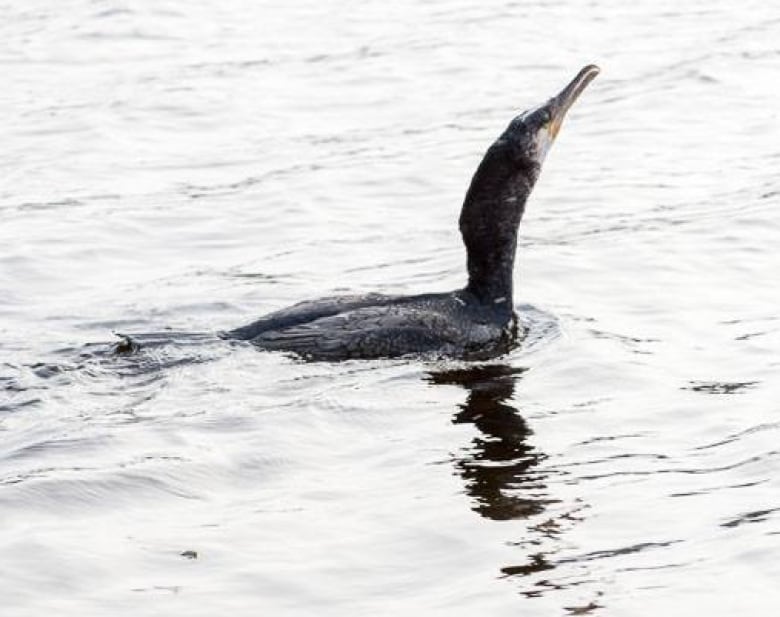 In a Facebook post, Minty said, the bird ‘may be just old and on its last legs and, if so, we gave it a full belly and extended its time a bit. On the other hand we may have helped it over a hump and it might do well. Such is wildlife rehab.’ (Dennis Minty Photography)

Since the bird appeared to be in good shape after its night in the porch, they took it outside and gave it another once over and the last of the tilapia before releasing it at the edge of the river.

“And off it went, it seemed fine,” said Minty.

It isn’t the first time the couple has helped out a creature in need.

They captured an ill red fox from the roadside in the community and brought it to Salmonier Nature Park for rehabilitation, and helped dozens of storm petrels that were blown inshore during bad weather. 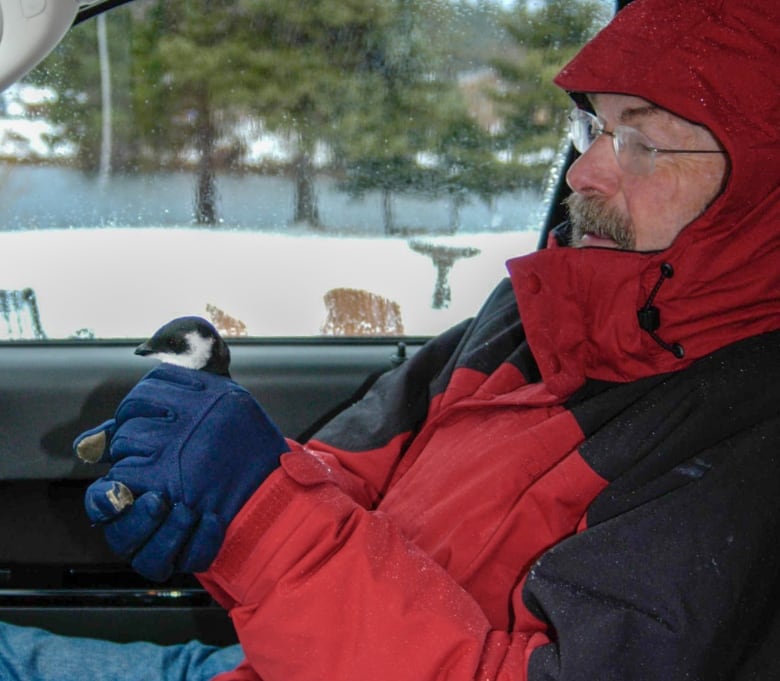 Dennis Minty with a Dovekie that turned up on his lawn after an easterly gale in January of 2013. It was uninjured but couldn’t take flight from the ground, so he kept it warm and dry overnight and released it the next day. (Antje Springman)

“They’re about the size of a robin, so they were a lot easier to handle than this guy,” said Springman.

“Sometimes we have people call us because they know we have experience,” she said.

“We do dog rescue as well,” added Minty.

Don’t try this at home

While Minty has the expertise to help wild animals in distress, he said it isn’t something people without the proper experience should attempt on their own.

“They can be quite dangerous to people, so even if they are ill they’ll lash out, they’ll try to defend themselves, they don’t know that people are trying to provide aid,” he said.

“The general rule of thumb, unless you know what you’re doing, is leave them alone.” 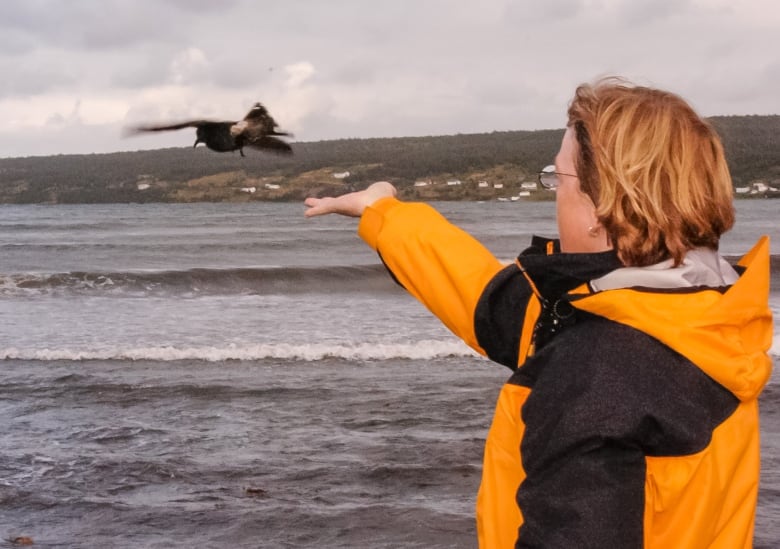 Antje Springman releasing a Leach’s Storm Petrel. Minty says seabirds become disoriented after being blown inland, and since they are accustomed to launching from the water or a cliff face, they have difficulty on land, especially in the woods. (Dennis Minty)

Minty said one common rescue that people can do is for small birds that fly into window glass. If they aren’t seriously injured, he said they often just need a couple of hours in a warm, dark space to recover.

“So that’s a good intervention, anyone can do that.”

If you do encounter a wild animal in distress, contact the wildlife division of the provincial department of fisheries and land resources.

“We basically stopped our discretionary spending,” said O’Blenis, the co-founder and CEO of Evidence Partners, which makes software for accelerating the review of scientific and medical literature, using artificial intelligence. “We cut investments in things meant to help us grow.”

It was a defensive posture born of experience. O’Blenis had 12 years earlier nearly been crushed by the global financial crisis. Another looked to be on the way.

In 2008, O’Blenis and his colleagues, Jonathan Barker and Ian Stefanison, hit a brick wall with their first venture, TrialStat, which helped hospitals manage patients’ electronic data. While TrialStat had secured $5.5 million in venture financing just a couple of years earlier, the founders had burned through most of it during a rapid expansion. When the financial world collapsed, so did their firm.

The caution proved unnecessary. Like so many other businesses, O’Blenis underestimated the government’s willingness to keep the economy afloat with easy money. Nor did he anticipate that COVID-19 would prove a significant catalyst for the firm’s revenues so soon.

Evidence Partners is hardly the only local firm with technology particularly suited for the war against COVID-19. Spartan Bioscience and DNA Genotek adapted existing products to create technology for identifying the SARS-CoV-2 virus that causes COVID-19. Ottawa-based units of Abbott Laboratories and Siemens Healthineers make portable blood analyzers that diagnose patients afflicted by the virus.

The Shepherds of Good Hope plans to build an eight-storey building near its current shelter for the homeless in the ByWard Market that would include supportive housing for up to 48 people, a soup kitchen and a drop-in centre.

The organization says it wants to be part of the solution to the housing crisis that has fuelled a rise in homelessness in Ottawa.

People would be moved out of the emergency shelters and into their own tiny apartments in the complex, which would include a communal dining hall and staff available to help with mental health, addiction and medical problems, said Caroline Cox, senior manager of communications for the Shepherds.

Some residents in the neighbourhood are opposed, saying services for the homeless and vulnerable should not be concentrated in one area of the city.

“I was flabbergasted,” said homeowner Brian Nolan, who lives one block from the development proposed for 216 Murray St., where currently a one-story building houses offices for the Shepherds of Good Hope.

Nolan said that, in the 15 years he’s lived in the area, it has become increasingly unsafe, with home and car thefts, drug dealing, loitering, aggressive and erratic behaviour, urinating, defecating and vomiting on sidewalks and yards and sexual acts conducted in public on his dead-end street. Before he lets his son play basketball in the yard, he checks the ground for needles and his home security camera to see who is nearby.

evehe Carleton University Forum Lecture: Towards a Feminist Post-COVID City given by Leslie Kern launches Ottawa Architecture Week. Urban geographer, author and academic, Kern will discuss how the pandemic has highlighted long-standing inequalities in the design, use and inclusivity of urban spaces. The talk will share some of the core principles behind a feminist urban vision to inform a wider vision of justice, equity and sustainability.

Kern holds a PhD in Women’s Studies from York University. She is currently an associate professor of Geography and Environment and director of Women’s and Gender Studies at Mount Allison University.

Kern is the author of two books on gender and cities, including Feminist City: Claiming Space in a Man-Made World (Verso). The book discusses how our cities have failed in terms of fear, motherhood, friendship, activism, the joy and perils of being alone, and also imagines what they could become.

Kern argues, “The pandemic has shown us that society can be radically reorganized if necessary. Let’s carry that lesson into creating the non-sexist city.”