One by one, all 12 players on the Breton Education Centre boys basketball team hit a wet patch in the corner of the gymnasium and slide to the floor, piling onto one another in a jumble of flailing limbs, before scrambling back to their feet to continue their pre-game lap of the court.

That’s the slapstick moment that Grade 9 student Aaron McMullin caught on video during this February’s New Waterford Coal Bowl Classic in Nova Scotia. The moment, beginning at 17 seconds into the video, became a highlight of the tournament, and one that few in the gym that day will soon forget — especially since it will soon be widely broadcast on television.

“I think it was just the fact that nobody really expected it, but when the first three people went down, everybody knew something was up,” said McMullin.

It was his first Coal Bowl and he was excited to do the traditional run around the gym.

“I ran out high-fiving all the kids, then I saw 10 guys fall right before me, so I started kind of laughing,” he said. “So I tried to kind of run around them, and it was worse than ice. As soon as I touched it, I was one of the last ones, and I went flying.” 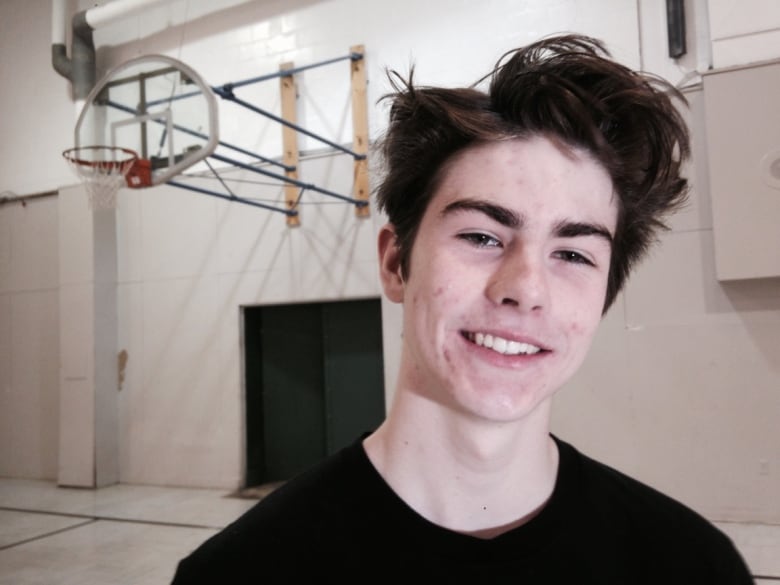 MacLean was among the last to fall. (Holly Conners/CBC)

It’s just amazing that someone from small town New Waterford can go on something this big.– Aaron MacLean

MacLean said how all 12 players managed to go down is “a mystery.

“I still don’t know to this day how it all happened. At least we went down as a team.”

“I wish I kind of did, you know. It kind of made us famous.”

When McMullin got home after the game, he posted his video to Facebook.

“I got, I think, a thousand views the first night.”

After that, his mom suggested submitting it to America’s Funniest Home Videos.

About three weeks later, he learned it had been accepted.

“I was in my room freaking out ’cause I got a phone call, and she was like, ‘Oh yeah, you’re coming down to L.A.'”

McMullin flew to California over March break for the show taping, where his video made it into the final three.

He can’t reveal the outcome of the show before it airs May 6, when it’s estimated as many as six million people will be watching, according to executive producer Michele Nasraway.

Screeners look for clips that are funny or unusual. 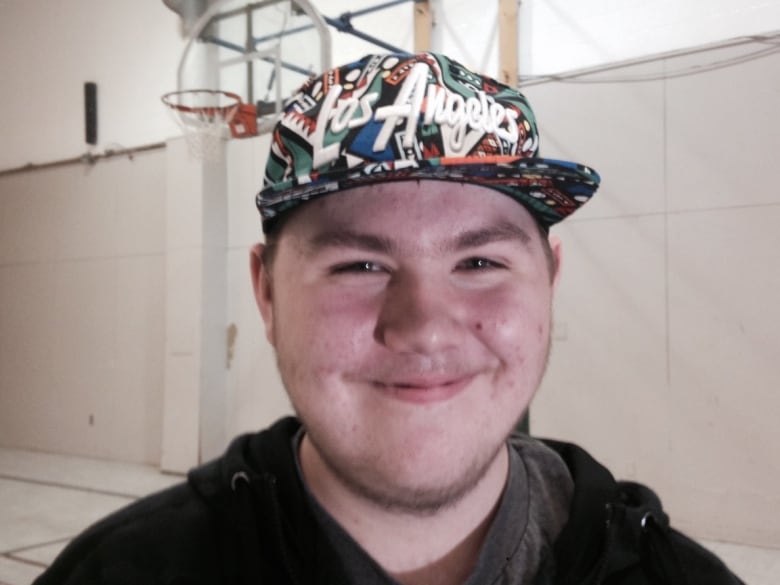 McMullin went to Los Angeles in March for a taping of the show. (Holly Conners/CBC)

“To see 12 basketball players come out, and slip and fall in quick succession was highly unusual, and it made us laugh,” said Nasraway.

McMullin’s pratfalling basketball players are up against some tough competition: a young girl and two toddlers.

“Kids and animals definitely seem to be preferred videos amongst voters,” said Nasraway.

For MacLean, it’s an honour just being nominated.

“It’s just amazing that someone from small town New Waterford can go on something this big, ’cause I grew up watching AFV, and I just think it’s great.”

Regardless of whether the BEC Bears take the win on AFV, they had the satisfaction of regaining their composure after their group tumble and winning that Coal Bowl game.

“We came back and pulled out the win,” said MacLean. “Didn’t really mess with the corner though. We just let that corner be. It took the best of us.”