An idea that began when a classicist went to a brewery to sip beers and ponder the history of hops has brought to life an ancient ale.

It took hours of translating, milling and baking, but ale experimenters in Winnipeg have finally sipped a beer created from a fourth-century Egyptian alchemist’s recipe.

“If you expect this to taste like a modern beer, you are not going to find that,” said Matt Gibbs, chair of the University of Winnipeg’s Department of Classics.

“This beer is very, very sour. It’s good. It’s much better than I thought it was when we first did it, I will say that much, but it’s different.”

Gibbs got the idea while sitting at a bar talking about old beers with a pair of brewmasters.

The original recipe was found in the book, The Barbarian’s Beverage: A History of Beer in Ancient Europe, by Max Nelson at the University of Windsor. It was chosen because Gibbs figured he could stay close to the original process and, unlike some of the other recipes, the ingredients were available and legal. 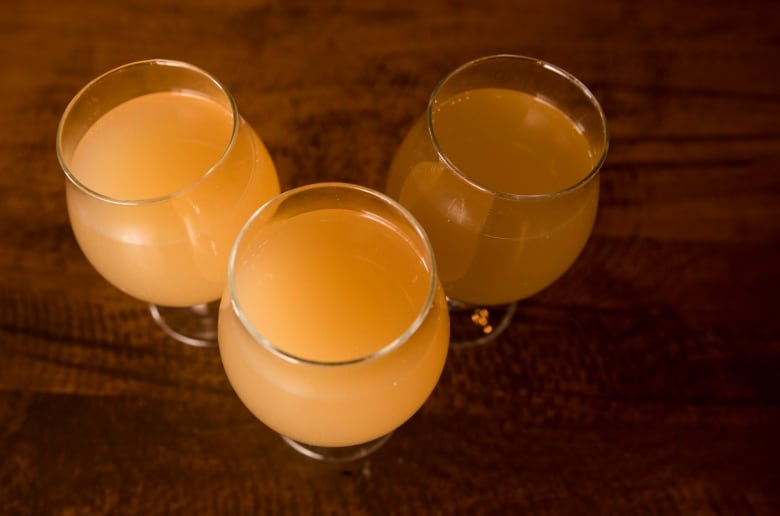 Beer made an old-fashioned way is shown at Barn Hammer Brewing Company in Winnipeg on Tuesday. (David Lipnowski/Canadian Press)

Gibbs received permission to translate the recipe out of ancient Greek and then got to work with brewers Tyler Birch and Brian Westcott, co-owners of Barn Hammer Brewing Co. in Winnipeg.

First, they made a sourdough bread from water and barley flour milled by hand. It took 18 hours to bake the loaves at a heat low enough that the enzymes essential for beer-making stayed alive.

The loaves were then submerged in a fermenter at Barn Hammer.

The only major differences from the original recipe was that a stainless steel fermenter was used and the barley wasn’t malted on a roof in the sun.

Weeks went by and the experiment slowly turned from a murky mix to a pristine pint.

“After tasting the bread they made, I thought we were going to have something really disgusting, but it turned out really well,” Birch said.

“I’m actually blown away by how good it is. It’s actually very drinkable.”

The simple taste of that makes it quite clear how much the palate has changed over 2,000 years.– Matt Gibbs

It’s not what most people would consider a beer and tastes more like a sour cider with hints of raisin or apple. The drink is flat because there was no carbonation more than 1,000 years ago. The brewers figure the alcohol content is about three per cent, similar to modern light beer.

The brew is not for sale — yet — but they are open to marketing an ancient batch in the future.

The ale is the beginning of research into how it and other beers were consumed by ancient societies. The initial batch has demonstrated how much brews have changed as technology around beer-making developed, Gibbs said.

“There were things we learned in terms of taste and technology and in processing, but I think the most important one was taste,” he said.

“The simple taste of that makes it quite clear how much the palate has changed over 2,000 years.”

How some grocery store mirrors nudge you toward healthier choices

The Nivea prank that had airplane passengers sweating