It is one of the most admired planets in our solar system: Saturn. But a new study suggests that the ringed beauty will lose its most stunning feature.

According to the study published in the journal Icarus, Saturn, the sixth planet from the sun and the only one in our solar system with such an intricate and large ring system, is losing its beloved rings.

The particles of ice that make up the rings are being pulled into the planet at a rate that could fill an Olympic-sized swimming pool every half hour, something that scientists refer to as “ring rain.”

This would mean that the entire ring system could be gone in 300 million years. But, if you factor in additional data collected by the Cassini spacecraft that flew through the rings in 2017, it could be as soon as 100 million years.

An artist’s impression of how Saturn may look in the next hundred million years. The innermost rings disappear as they rain onto the planet first, followed by the outer rings. (NASA/Cassini/James O’Donoghue)

While that may sound like a long time, in the scale of the planets, it’s the blink of an eye. Our solar system is roughly four billion years old.

The new findings may help shed light on the age of the ring system. Scientists are unsure if they are old or formed later in the planet’s lifetime, perhaps by small moons that collided. But if the rings will completely disappear over what astronomers consider a short period of time, it suggests that they formed late. Millions of years ago, Saturn could have been even more dazzling than it is today.

“The young age of the rings has some really startling implications. It is possible, in the age of the dinosaurs, that Saturn’s rings were even larger and brighter than we see them today,” said Tom Stallard, associate professor in planetary astronomy at the University of Leicester and co-author of the paper.

And while we may have missed out on an even larger ring system, we’re fortunate to live at a time when they still exist at all.

“All the evidence keeps pointing lately to the rings being young, 100 million years or younger,” said James O’Donoghue from NASA’s Goddard Space Flight Center and co-author of the paper. “Which shows you the possible window might just be a few hundred million years of this ring system. We’re lucky to be around in this time.”

Saturn’s rings are made up of ice particles ranging in size from dust grains to boulders. They orbit the planet, but as they do, the tug of gravity from the enormous planet below pulls them inward. It’s a delicate balancing act between gravity and orbital velocity.

However, the particles can also become electrically charged, either by ultraviolet light from the sun or from plasma clouds that are created when tiny meteoroids zip through the rings. Once charged, that balancing act is disrupted and the particles can be pulled along the magnetic field lines into the upper atmosphere.

This discovery supports earlier findings. When the Voyager 1 and 2 spacecraft passed the planet in the 1980s, they detected three dark bands in its upper atmosphere. A later study suggested that they were caused by charged ice particles falling along the planet’s magnetic field lines.

Saturn isn’t the only planet with rings: Jupiter, Uranus and Neptune all have thin, diffuse rings. And this could be what Saturn will be left with in 100 million years. 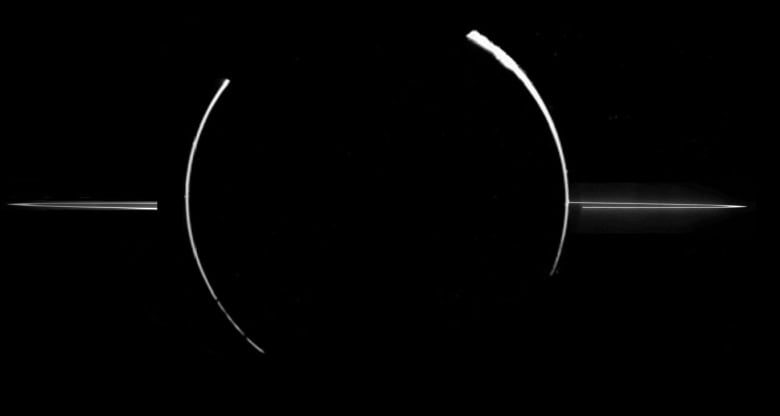 The researchers used data from the Keck II telescope in Mauna Kea, Hawaii, together with the Voyager data. O’Donoghue hopes to use other telescopes in the future such as the upcoming Thirty-Meter-Telescope scheduled to be constructed in Hawaii or the James Webb Telescope scheduled to launch into space in 2021. The telescopes may help answer questions about how the particles become charged and other ongoing mysteries.

As for the prospect of losing the rings one day, O’Donoghue said people should be happy.

“They should be sad that they’re going, I guess, but happy that they were around to see it,” O’Donoghue said. “It’s pretty lucky. It provides for the imagination, thinking about what the other planets might have looked like as well.”

It’s a reminder of just how dynamic planets are, O’Donoghue said.

“The things we thought we knew are being revised all the time,” he said. “Everything is in flux.”