The holiday season can be filled with joy, but can also be a pain for your bank account.

According to a recent survey from PricewaterhouseCoopers, Canadians plan to spend an average of $1,563 over the holidays, up nearly 4 per cent from a year ago.

All this spending can lead to debt troubles, according to CTV News’ Chief Financial Commentator Pattie Lovett-Reid.

“I guarantee you, a year from now there will be people still paying off their credit card,” Lovett-Reid said during a recent interview with CTVNews.ca. “If you took $1,000 and you bought your holiday gifts, and you only made the minimum payment of $25, at the going rate out there, that’s 61 months to pay it off and then you’ve added $500 in interest.”

Lovett-Reid and Laurie Campbell, CEO of Credit Canada, spoke to CTVNews.ca about some of the best ways to stay on budget over the holidays.

Both experts agree the biggest thing people can do to avoid overspending through the holidays is to plan a budget ahead of time, and stick to it.

“So many people end up buying that one extra gift for this one person…and it really blows the budget,” Campbell says.

Campbell adds the budget you plan for shouldn’t just include the gifts you buy, but should also include your budget for parties, food and outings.

Lovett-Reid said it’s easy for people who don’t plan ahead to be forced to dive into some of their other accounts to pay the bills.

“I really hope people don’t dip into their savings, their retirement fund, their emergency savings, because the fact is, you’re not alone here,” she said. 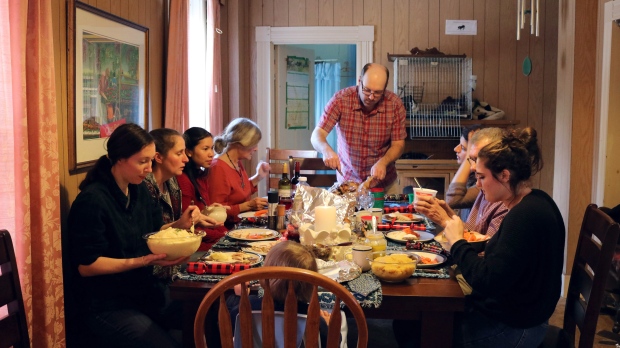 A group of strangers with nowhere to go during the holidays gathered at a farmhouse in Blockhouse, N.S., hosted by Patty McGill for Christmas Day dinner, Sunday, December 25, 2016. (THE CANADIAN PRESS/Adina Bresge)

Holiday parties can also break the bank if you don’t plan accordingly, the experts say.

Campbell suggests making your party a potluck and asking attendees to bring their own drinks in order to keep the cost friendly.

“(Alcohol) is extremely expensive and most people will (bring their own),” she said. “There’s only the odd person who would come empty-handed anyway.”

Campbell adds potlucks can be more fun than a traditional dinner because people get to taste different foods.

Credit Canada suggests avoiding a purchase of a single-night outfit for a party, such as an ugly sweater or party dress. These can be expensive pieces of clothing that aren’t functional for much beyond those special occasions. 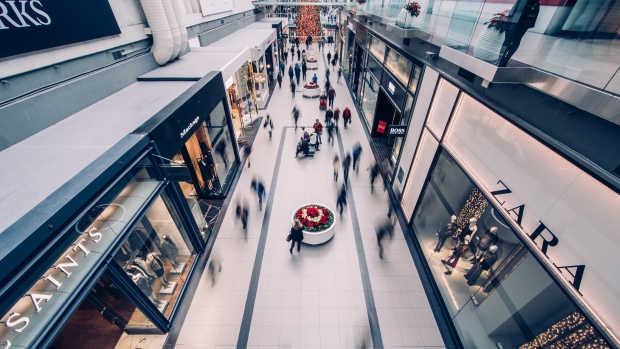 A busy mall at Christmas is seen in this file image. (Pexels)

Making sure you compare the prices of gifts at different stores is key, Campbell says.

Comparison shopping takes time, however, so starting your Christmas shopping starter early can help when it comes to finding the right deals.

“If people haven’t started their shopping, get out there now or as soon as possible,” Campbell says.

Because comparison shopping can take time, its best to avoid peak shopping hours, shopping while hungry or with a child, all of which can make the shopper more inclined to spend quickly just to get it over with.

Lovett-Reid suggests taking time to think a big purchase through before deciding to go with it.

“Give yourself 24 to 48 hours, pause, reflect if it makes sense, can you really afford it?” she said. “In some ways you have to put a wall around yourself.” 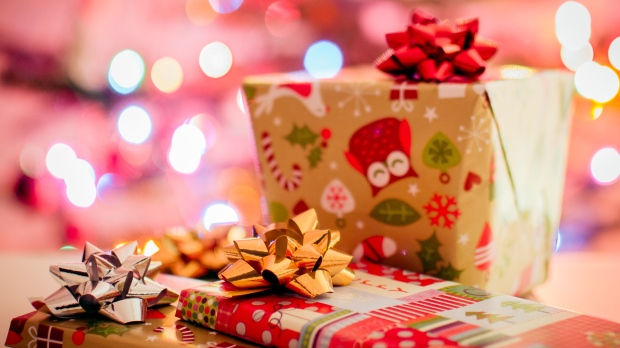 A Christmas present is seen in this file image. (Pexels)

Lovett-Reid suggests there are plenty of options for giving a meaningful gift that won’t hit the wallet.

This includes using your reward points, which can allow the shopper to buy an expensive gift without spending a dime. You can also barter for gifts or sell some items that you don’t use to give you some extra spending money.

Campbell says offering up your time to someone can also be a great way to give a meaningful gift, without spending money.

“Offer service to somebody,” she said. “You neighbour may have a hard time shovelling snow, offer shoveling snow. Offer service to your teenager of cleaning up their room five times.”

“It’s not about the presents, but it’s about the time you’re spending together and the activities and the traditions that you have.”

For group gift-giving, a Secret Santa is also a good way to stay on budget as then you only have to worry about getting one gift, instead of getting something for everyone.

‘Manifestation of patriarchy’: The surprising feminist history of women’s pockets

Michigan man, 90, dresses like Santa to bring Christmas to wife in nursing home

The University of Windsor will be the site of Canada’s first organization dedicated to countering threats to the connected transportation marketplace.

The SHIELD Automotive Cybersecurity Centre of Excellence will focus on developing the skills, innovations and policy to secure connected and autonomous vehicles.

Researchers will partner with industry, government and community stakeholders.

Co-founding and heading up the centre will be Dr. Mitra Mirhassani of the Department of Electrical and Computer Engineering and Dr. Ikjot Saini of the School of Computer Science.

In the past year, the two University of Windsor professors were both recognized as being among Canada’s top talents in the automotive cybersecurity field.

“Transportation systems are especially susceptible to attacks from malicious actors due to the complexity, implementation costs and lifecycles of equipment and platforms.”

The SHIELD centre is a continuation of the Windsor region’s focus on developing its cybersecurity ecosystem.

The province has already designated the area as the regional tech development centre for cybersecurity and border logistics.

The cybersecurity centre got a further boost this week with the announcement of a memorandum of understanding with the Automotive Parts Manufacturing Association (APMA).

APMA and SHIELD will collaborate to develop market-based technologies to meet the needs of producers and consumers and build academic programs to address industry’s evolving requirements.

“We hope that this partnership will help to advance a cybersecurity culture shift in the industry in Canada,” said APMA president Flavio Volpe.

“There is much work to be done to protect our collective interest in advancing this country’s globally competitive automotive sector.”

The centre will also promote the sharing of knowledge among parties to advance standards and enhance policies in the field.

Part of the plan is to offer micro credentialing through the university’s Continuing Education programs.

“We plan to offer consultation and test services to small- and medium-sized Canadian companies that will help them stay up to date,” said Dr. Saini.

Police say the events were held in downtown Hamilton on Jan. 3 and Jan. 10.

The force alleges that 40 people attended first event and 60 attended the second.

Police say they informed the “Hugs Over Masks” organizers that the planned Jan. 10 gathering would result in charges, but they went ahead with the event.

They say a 27-year-old man and 38-year-old woman are facing charges under the Reopening Ontario Act that carry a minimum fine of $10,000 if convicted.

It requires people to stay home except for essential activities such as accessing health care or shopping for groceries.

The new measures also include restricting the hours of operation for non-essential retail stores such as hardware stores to between 7 a.m. and 8 p.m.

Addressing big box stores, which are allowed to remain open, Ford said an inspection blitz is coming to ensure they are following proper protocols.

Schools in Hamilton, Toronto, York, Peel and Windsor-Essex will not return to in-person learning until Feb. 10.

Other public health regions, including Halton and Niagara, will find out when students can return to class by Jan. 20.

Schools will now require students in grades 1-3 to wear masks and masks will be required outside where physical distancing can’t be maintained.

The premier announced the restrictions shortly after the province released new projections that show the virus is on track to overwhelm Ontario’s health-care system.