There’s a wonderfully quirky and little-known information archive in downtown Winnipeg that predates Google and probably has more hidden secrets than the search engine giant.

It’s a rich resource for researchers, a rabbit hole for history lovers and a trivia buff’s bonanza.

You can find, in this paper-based Winnipeg Public Library archive, the seating capacity of all of Winnipeg’s movie theatres in 1978, or the minimum wage rates for every year between 1921 (25 cents) and 2003 ($6.75). 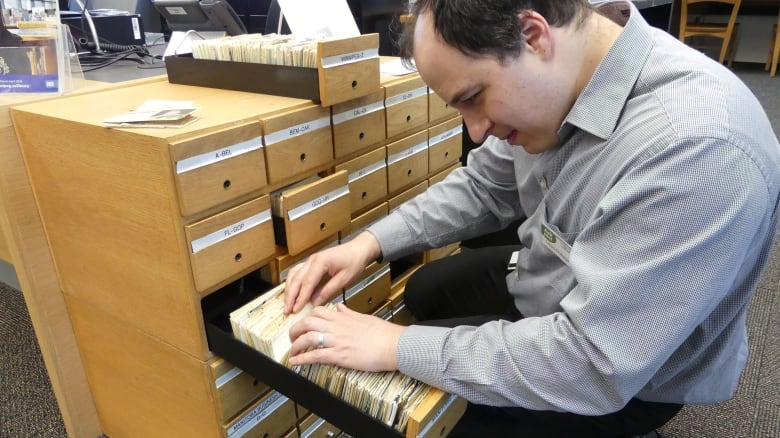 Louis-Philippe Bujold goes through some of the entries in the Where File. (Darren Bernhardt/CBC)

“This was kind of our search engine before the Internet was widely available,” said Louis-Philippe Bujold, local history librarian at the Millennium Library.

“It represents thousands of work hours from our librarians over many years who dedicated their time to try to answer the information needed of our city’s citizens and library patrons.”

There are entries for medievalists, miniatures enthusiasts, singles, sexaholics and skeptics — the latter for those “who believe the world is filled with superstitions and bizarre ideas.” 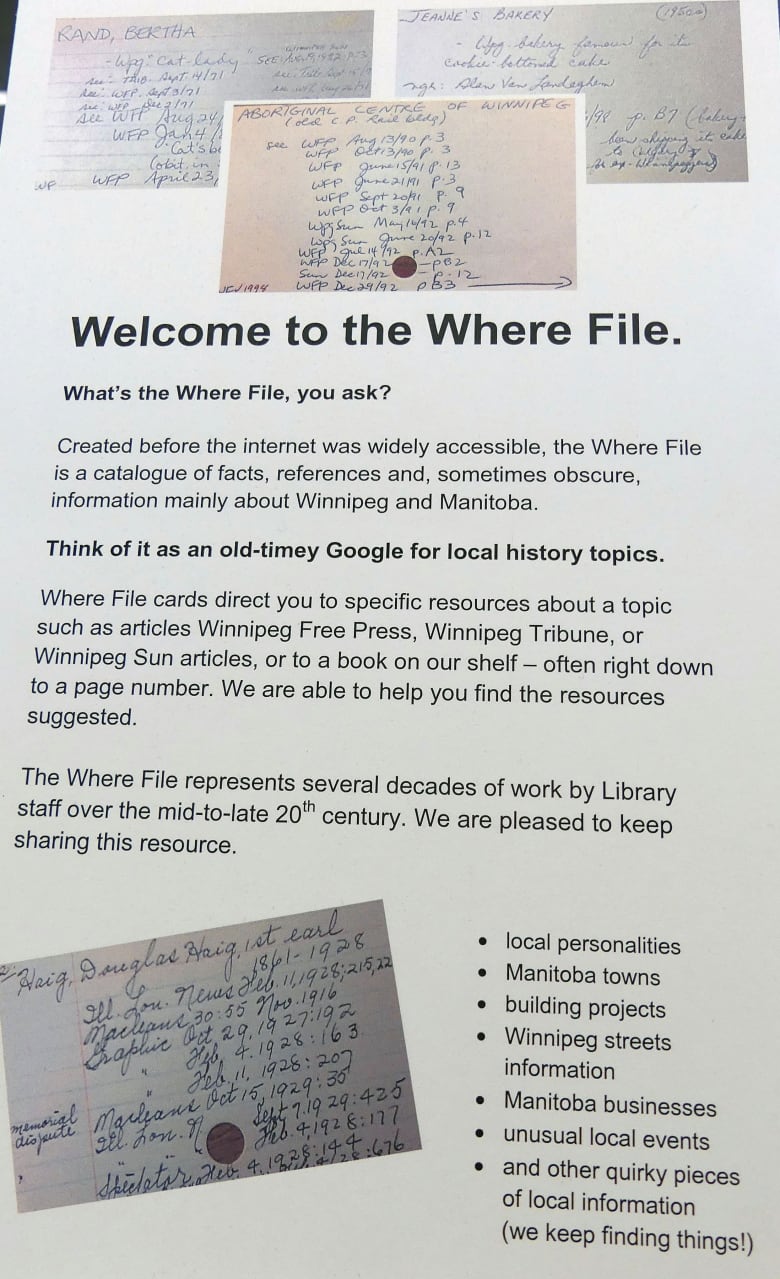 The Where File was made available to the public in 2017 after decades of being accessible only to library staff. (Darren Bernhardt/CBC)

The cabinet of index cards, located on the fourth floor of the library, was assembled by city librarians who decided to do something about the most common questions they were constantly fielding.

They wrote the answers on three-by-five catalogue cards, and if the answers were too long, they listed the books, magazines and newspapers — and specific pages — where the information could be found.

“Finding the answers to those questions sometimes involved a lot of work, so they created a catalogue that would [contain] their research in case it was going to be needed again. Having on-hand information saved a lot of time,” said Bujold. 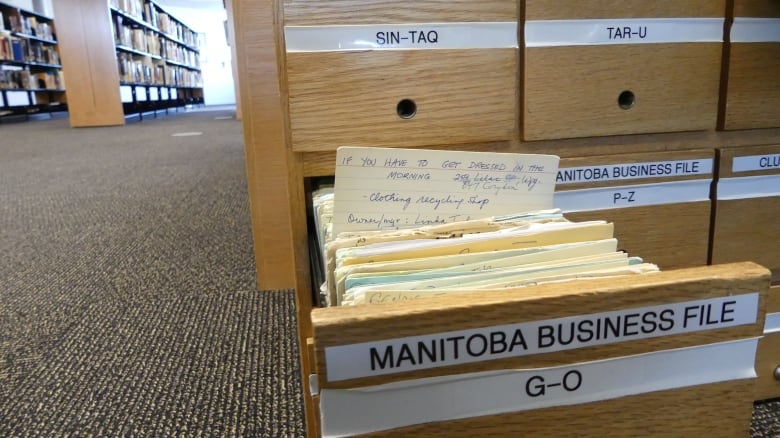 The business file includes an entry about the now-closed Winnipeg vintage clothing shop If You Have To Get Dressed In the Morning. (Darren Bernhardt/CBC)

As entries multiplied, more drawers were added, and cards were reassembled into subject categories.

Sometimes paper clippings were added in makeshift pockets or paper clipped to the card, while more popular subjects expanded into multiple cards stapled together.

“Once you start looking in this, you can spend hours and find details and information you would never find otherwise,” said Bujold, noting the information was never digitized, so most of it only exists in the file.

“It’s a fallacy to say that everything is on the internet. That’s not true. And we still use the Where File precisely because for topics that are specialized on Manitoba, you’re less likely to find it anywhere else.”

Want to know about postal service in the pre-Winnipeg Red River Settlement or the dog-sled mail run from Norway House to Winnipeg? How about the Eaton’s Beauty Doll or Winnipeg’s connection to Playboy magazine?

Did you know there was once an honour, called the Order of the Gate, given to residents of Fort Garry for meritorious service to the community? 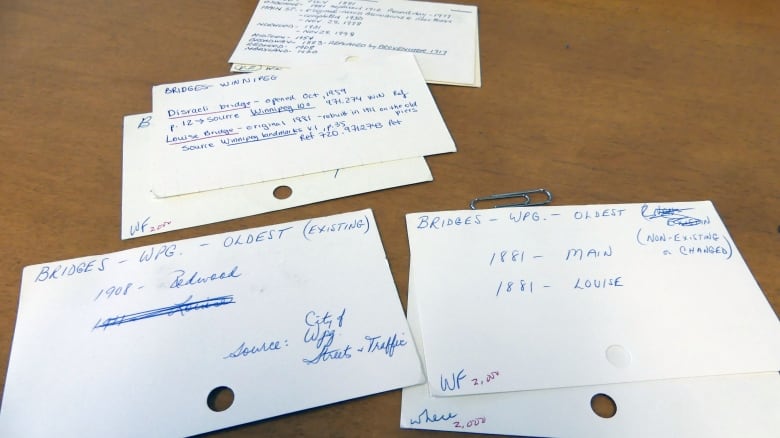 Want to know all about the Winnipeg’s bridges? The Where File will support that. (Darren Bernhardt/CBC)

Like a tree’s age is measured in rings, the passage of time can be seen in the ink used for Where File entries, progressing from fountain pens to typewriter ribbon and ballpoint pens.

“You feel the history of the catalogue. You see that so many people contributed to it,” said Bujold.

“It’s kind of a historical artifact in itself — a physical manifestation of the topics that were of interest to Winnipeggers during those years.”

The file on Winnipeg city history has seven cards — as does the one about the city’s bridges, containing the dates they were built, demolished and rebuilt. The oldest existing span, the Where File can tell you, is Redwood (now Harry Lazarenko Bridge) built in 1908, while the longest is Slaw Rebchuk at 660.2 metres. 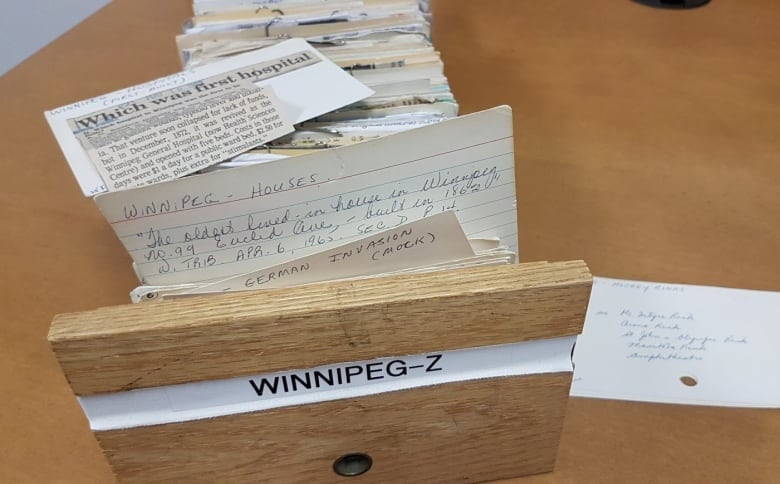 The Winnipeg drawer is flush with facts and trivia about the city. (Darren Bernhardt/CBC)

It is well known that Winnie-the-Pooh was named after Winnipeg, but did you know he was actually a she? Winnie lived until May 12, 1934, when she was euthanized at age 20. Her skull was stored at the London Zoo and put on display in 2015.

“If we’re ever stumped by a question, the Where File has saved the day,” said Glen Morris, an information services assistant at the library.

While much of the content is Manitoba or Winnipeg-centric, there are hundreds of other cards on things like the phonetic spelling alphabet, the prayer for police officers and the one for fishermen, or Lou Brissie — the one-legged baseball player — and parachuting.

The first successful jump from an airplane happened in 1912 in St. Louis, but the first creature to jump with a parachute was a dog dropped from a hot-air balloon in France in 1785. 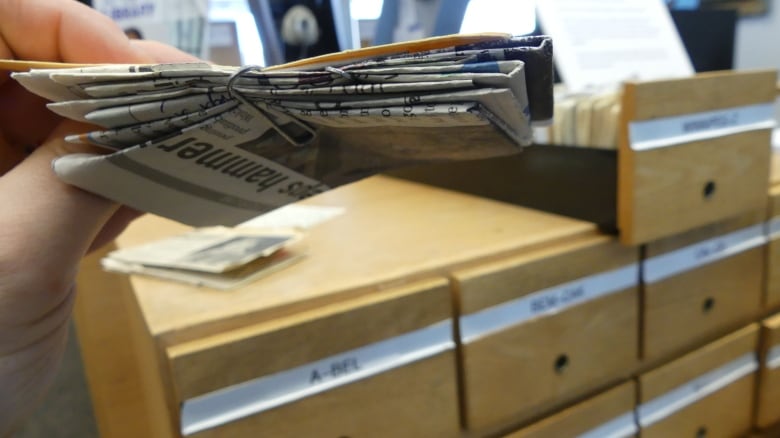 Some of the cards are bundled with clippings from newspapers and magazines. (Darren Bernhardt/CBC)

“It’s like parts of Winnipeg’s collective historical brain frozen in time,” said information services librarian Monique Woroniak. “What were people researching? What school assignments might they have had? What topics were of concern to them? The Where File tells us that.”

The collection was started in the 1960s and maintained until the early 2000s. The cabinet was stored in a staff room and used exclusively by library employees.

Bujold isn’t entirely sure how many entries are in the Where File but said “we’re talking several thousands.” 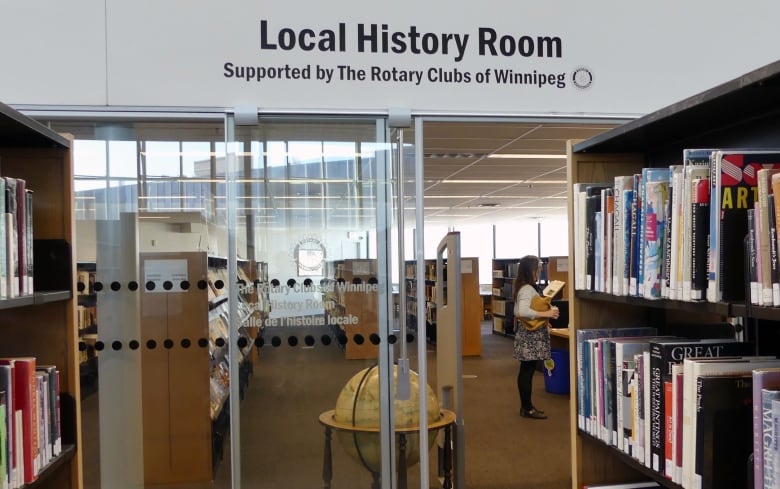 You’ll find the Where File in the Local History Room, at the back of the stacks on the fourth floor of the Millennium Library. (Darren Bernhardt/CBC)

It was not available to the public until a few months ago, when it took up its new place in the Millennium Library’s Local History Room, prompted by suggestions from current librarians like Woroniak.

“When people contact their public library and ask a question, whether it’s something straightforward or something related very personally to a need they have, I like to think they are gifting us a little part of themselves and that it’s our responsibility to care for those questions until we’ve found an answer, and then gift it back to the person asking,” she said.

“For me, evidence of library work, like what was stored in the Where File, is evidence of care and engagement with the community. I wanted people to see that care and even have it at their fingertips.” 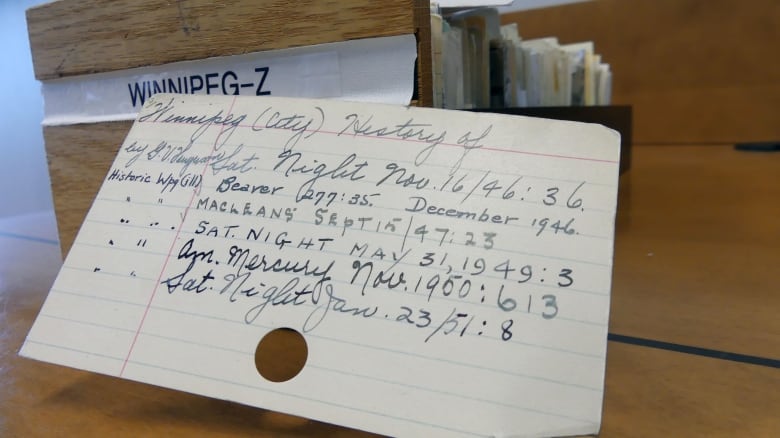 The entries on the cards are like miniature time capsules in themselves, going from being marked with fountain pens to ballpoint pens as the years went by. (Darren Bernhardt/CBC)

Although the file hasn’t been regularly updated since the early 2000s, occasionally a librarian might add an entry on an existing card or create a new one for a topic of significant interest.

For instance, a recent one is about Faron Hall, the man who became known as Winnipeg’s homeless hero after he jumped into the flood-swollen Red River to rescue a teen in 2009. In 2014, Hall’s body was pulled from that same river.

“My sister has worked in libraries across the country, from Newfoundland to Vancouver Island, and she’s never heard of something called the Where File,” said Mary Robinson, an information services assistant.

“This is a Winnipeg thing.”

More from the Where File