The aim of all advertising is to create selling ideas that are impossible to ignore. And in its quest to bring as much attention as possible to brands, the ad biz has shattered a world record or two along the way. From the world’s largest coupon, to the most expensive commercial ever made, to the first ad visible from outer space, breaking a world record can be a great marketing strategy.

The world’s first ad visible from outer space was unveiled in 2006.

It belongs to KFC. 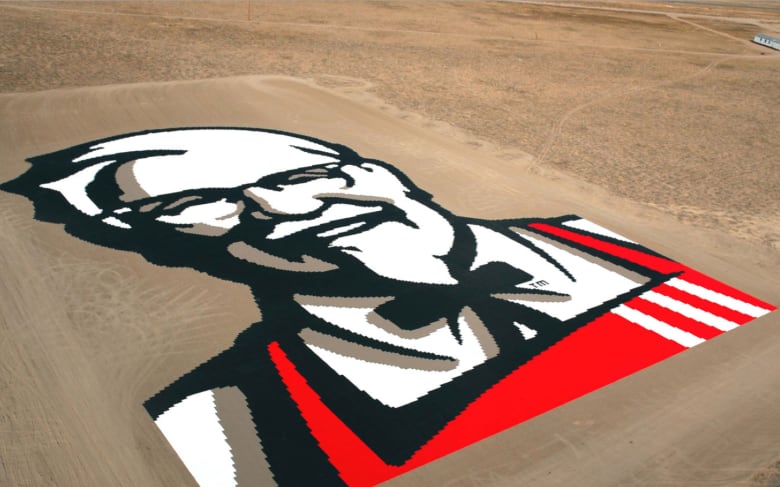 They called it the “Face from Space” – and it consists of nearly 70,000 painted tiles.

For the first time ever, the Colonel is pictured wearing an apron instead of his typical white double-breasted suit in an effort to bring fried chicken back to its home-style roots.

But here’s the best part:

The ad sits just off the highway outside Rachel, Nevada.

Home to Area 51 – a remote and highly classified military facility many claim to be the “UFO Capital of the World.”

KFC President Gregg Dedrick said: “If there are extraterrestrials in outer space, KFC wants to become their restaurant of choice.”

He also said it was “One small step for mankind. One giant leap…for fried chicken.”

There is actually a Guinness Book of World Records entry for the world’s biggest coupon.

It was a coupon for a “buy one burger get the second one free” offer. 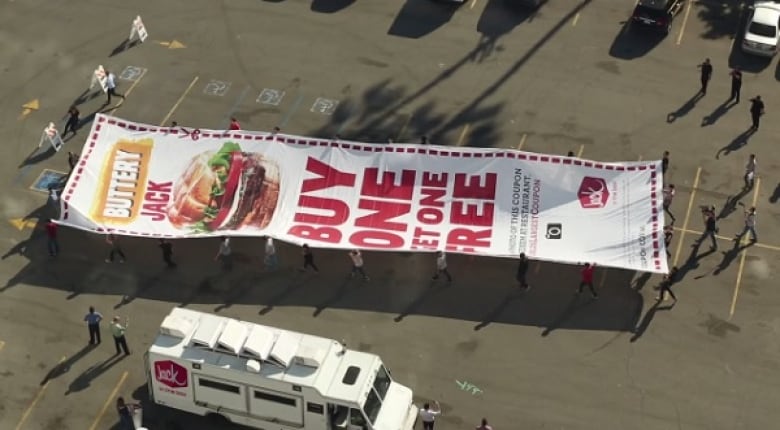 It measured 185 square metres or 80 feet long by 25 feet wide. Jack-In-The-Box hung it from a building in downtown Los Angeles and judging by the photo, it was eight stories tall.

But here’s the funny part. When the Guinness Book of World Records officials came to verify the gigantic coupon, they told Jack-In-The-Box it wouldn’t be valid for a world record unless the voucher was actually redeemed.

That presented a bit of a problem. So the crowd that had gathered helped the restaurant carry the huge coupon a few blocks to the nearest Jack-In-The-Box restaurant.

The coupon working its way down the streets of Los Angeles looked like a colossal parade float.

This story gets even funnier.

When they got to the nearest Jack-In-The-Box, the enormous coupon wouldn’t fit through the door.

There was only one option.

The coupon had to be presented at the restaurant’s drive-thru window. So the crowd made its way to the drive-thru, the coupon was redeemed and the world record was achieved.

To thank everyone, the restaurant gave the crowd free hamburgers, and anyone who took a photo of the giant coupon could redeem it at any Jack-In-The-Box in the country.

According to the book of world records, the record for the most expensive television commercial ever produced belongs to Chanel No 5.

The three-minute commercial was directed by Baz Lurhmann, who has made such films as Moulin Rouge and Strictly Ballroom.

It stars Nicole Kidman, who plays a glamorous actress pursued by the paparazzi. To escape one night, she jumps into a random cab and discovers a young man sitting there who doesn’t know who she is. She orders the cab to drive off and she has a four-day affair with the man until she has to go back to her celebrity life again.

The Chanel No. 5 commercial made its debut in North America in 2004.

It was then shown in Australia, the UK, France and the Netherlands.

The commercial is beautifully shot, with stunning locations in France and a sumptuous wardrobe – designed by Karl Lagerfeld.

Hard to imagine a three-minute commercial – which includes one full minute of credits – cost $33 million. Even when you account for the fact Nicole Kidman was paid $3.4 million, and director Lurhmann and Karl Lagerfeld didn’t come cheap.

It was financed entirely by Chanel.

But there you have it. An expensive Guinness Book of World Records record.