Four out of the 10 Canadian urban areas with the highest hate crime rates are in the Greater Toronto Area or Greater Golden Horseshoe, Statistics Canada data supplied to Maclean’s shows.

Police services covering Hamilton, Peterborough, the York region and Guelph all recorded hate crime rates per 100,000 that put their cities among the top 10 highest in the country in 2017, the most recent year with statistics available. Hamilton, Ont. saw the highest rate of any jurisdiction in the region and the third highest in the country, at 16 incidents per 100,000 people.

Barbara Perry, director of the Centre on Hate, Bias and Extremism at the University of Ontario Institute of Technology, said she wasn’t surprised. 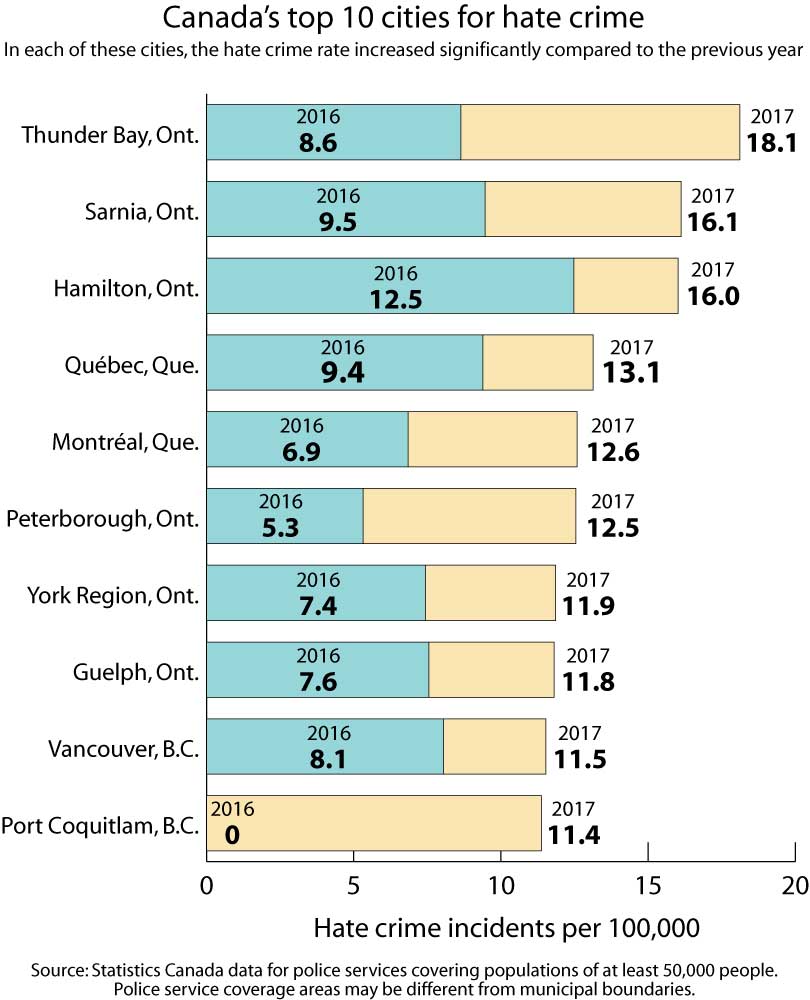 Maclean’s analyzed numbers from police services covering a population of 50,000 people or more in order to avoid large fluctuations in the hate crime rate caused by one or two additional incidents in small towns. The analysis is based on a more detailed version of the annual hate crime data posted publicly by Statistics Canada in late November.

The increases are part of a drastic nation-wide rise in hate crime, with Statistics Canada reporting 47 per cent more incidents from 2016 to 2017. The data captures only hate incidents that were reported to the police.

Statistics Canada did not release data showing the type of incidents or motivations broken down at the police service level. Nation-wide, the government agency reported 38 per cent of hate crimes were violent, with criminals most likely to target Jews, Muslims, Black people and people with marginalized sexual and gender identities. 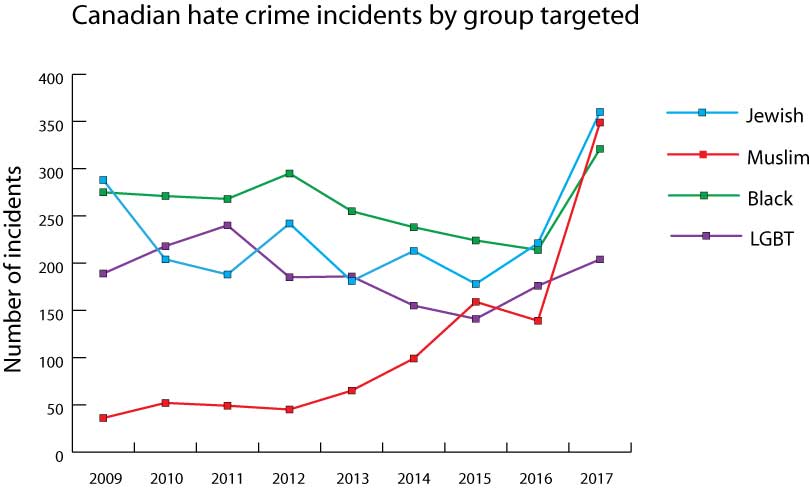 Police services in the GTA/Greater Golden Horseshoe region contacted by Maclean’s confirmed that national trends in hate crime motivations were mirrored in their communities. Superintendent Ricky Veerappan, who oversees the York Regional Police’s diversity, equity and inclusion bureau, said the force launched an anti-hate campaign in 2016 in response to rising negative sentiment towards Syrian refugees.

Veerappan said some of the large increase in police-reported hate crimes in the York region might be because of those outreach campaigns, in addition to an increase in the incidents themselves. “People are maybe a little bit more comfortable in connecting with the police, knowing the resources that are available, knowing the numbers to call and knowing members of our diversity unit are very accessible,” he said.

Josh Fraser, public information officer with the Guelph Police Service, said his force also participates in anti-hate public education campaigns. He noted that while Guelph’s hate crime rate of 11.8 incidents per 100,000 people is the eighth highest for any police service covering a population of 50,000 or more, 12 of the city’s 16 incidents were graffiti-related and seven took place on the University of Guelph’s campus.

Perry, the hate crime expert, said it’s important to remember that a handful of additional spray-painted swastikas reported to the police in a city like Guelph likely represents a much larger increase. She said her research and studies conducted by anti-hate groups suggest the true total number of hate crimes in Canada may be five to seven times greater than the official police-reported figure.

“It’s the tip of the iceberg,” she said. “There’s something real going on there.”