Pruss wanted to see how achievable a plastic-free lifestyle was and what she could learn about her own plastic use from cutting it out of her life.

Here’s what she had to say.

Q: How did you define single-use plastics for your challenge?

Viola Pruss: For most people it’s just straws or plastic bags … certain packaging. [For this challenge] I expanded it to items that you might use for a little bit longer but you still only use once, like the toothbrush for example. 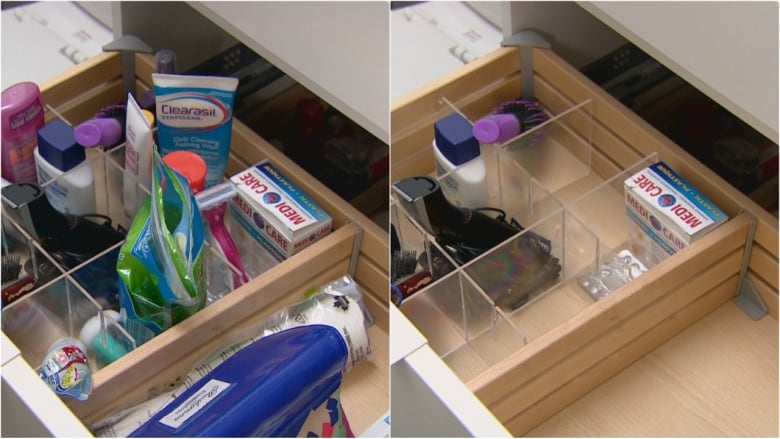 Pruss’s bathroom drawers before and after she removed all the plastic items she ditched for the month. (Mike Heenan/CBC)

What was the craziest thing you discovered had plastic in it?

VP: The craziest one from all of them was tea bags. I read in an article in The Guardian that a lot of tea bags are made with plastic to keep their shape, which I thought was insane. I looked at my own tea bags, which one of them once fell into the dishwashing machine and after the dishwashing was done it was still in that perfect little shape.

So I was starting to wonder how many of our Canadian tea bags are also made with plastic in them, and just for the silly purpose of having them look pretty? You hear all these reports of not putting plastic in the microwave, so I’m thinking, “I’m pouring hot water on this plastic tea bag, what happens with that?” 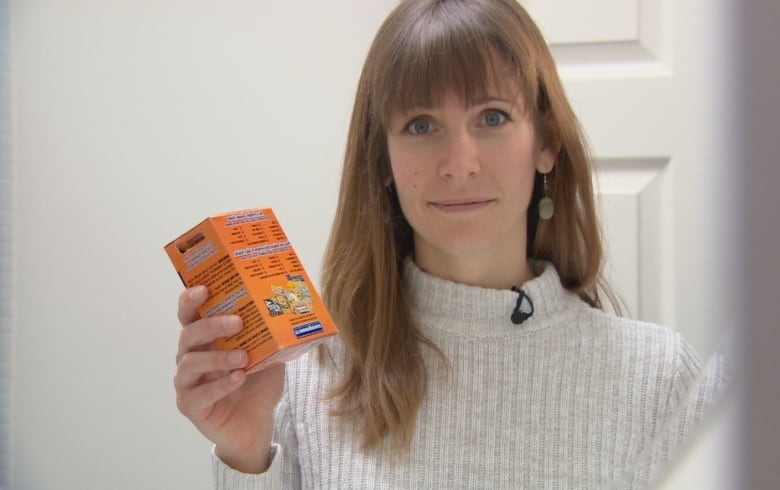 You kept your plastic toothbrush. What other things were you tempted to keep?

VP: I kept the toothbrush, I was very tempted to keep the toothpaste. Because the alternative of using the baking soda, it’s so acidic it kinda starts hurting your gums if you’re not used to it. You do get used to the taste eventually.

CBC New Brunswick radio producer Viola tried cutting single-use plastic from her life for one month. Here’s how it went. 3:53

Did you ever mess up?

VP: Yeah, I did. It’s easy when you’re at home and you’re focused on, “I can’t use these things.” It’s when I went out. Once I went to Tim Hortons for lunch and I made sure to say, “I am eating this here.” But I didn’t think about my drink. The other time I went to the movies and I had an all-inclusive ticket that we were using where you get popcorn and it wasn’t until the end of the movie when I went to throw the bag away that I realized. 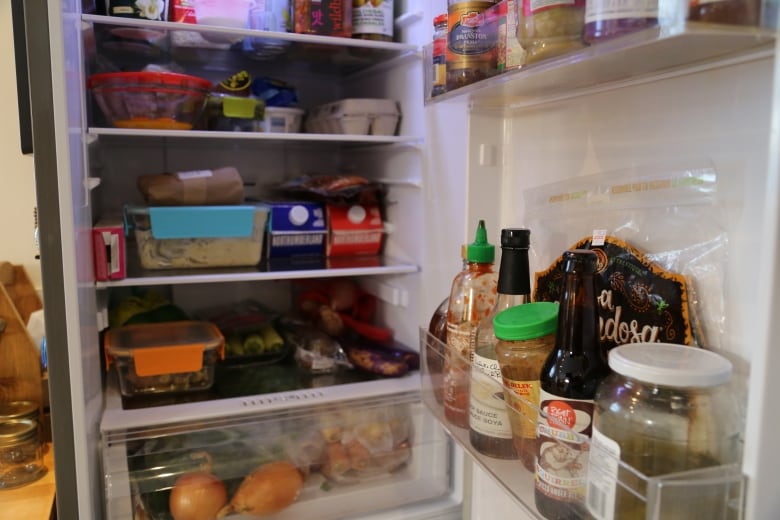 This was Pruss’s fridge before she cleared out all the plastic-packaged items. (Angela Bosse/CBC)

How hard it is to cut plastic out of your life?

VP: If you do it like me, it’s pretty difficult. I couldn’t even fully succeed. There’s so much more to think of. Food-wise is easiest because there are so many options and cleaning supplies is fairly easy if you’re willing to make the switch. It’s not cheap. I think there’s a lot of people who couldn’t even financially support this lifestyle because you do spend more on getting the alternatives, especially if you don’t want to make everything yourself. 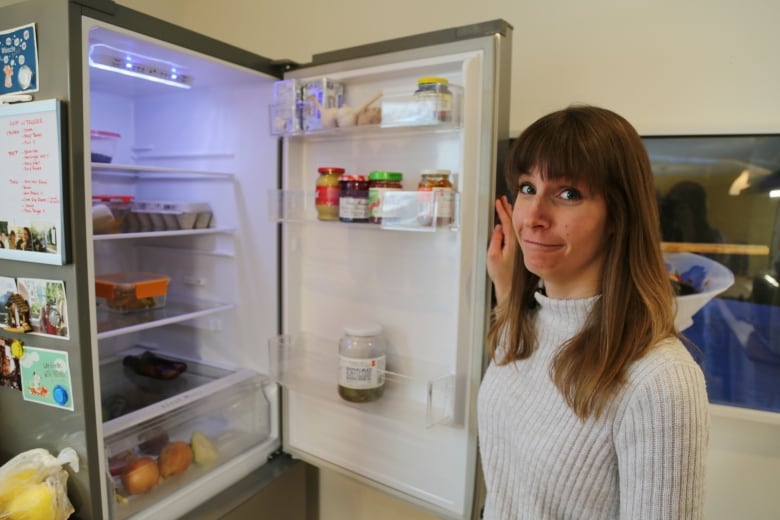 This is Pruss’s almost empty refrigerator after she cleared out everything packaged in plastic. (Angela Bosse/CBC)

You also need time. Even making a good bread or if you somehow find milk [in non-plastic containers] and make your own yogurt, all of those things take time. 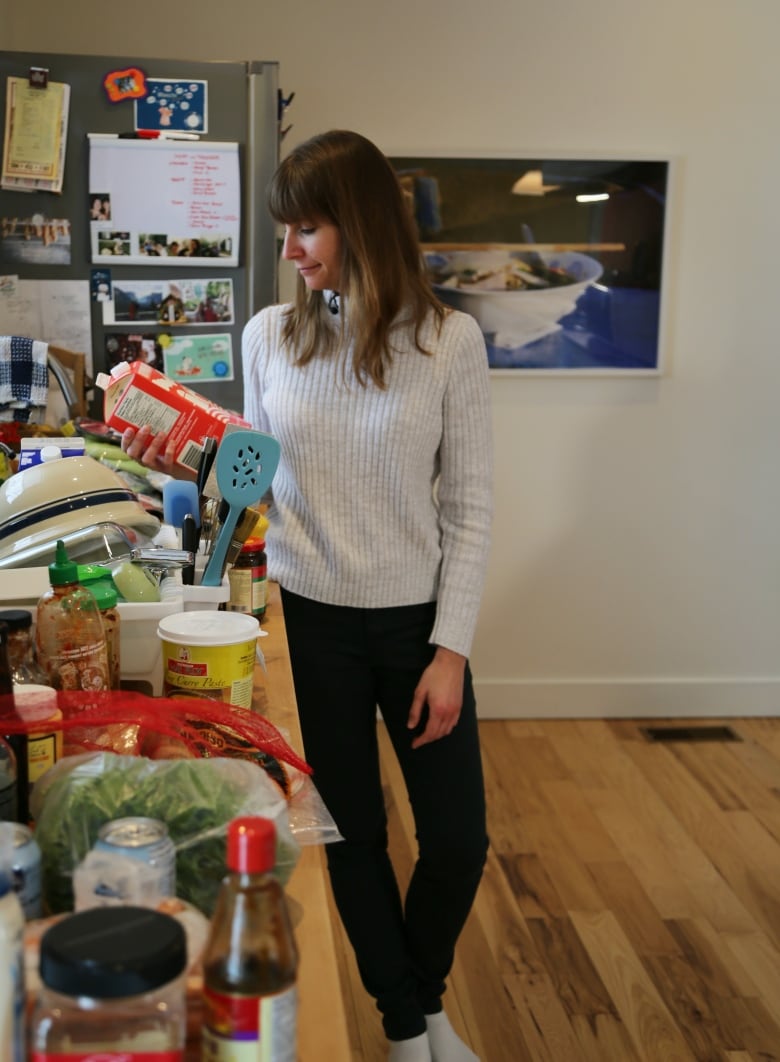 Out of all the plastic-packaged food items she had to give up, milk was what Pruss missed the most. (Angela Bosse/CBC)

Can you save money living plastic-free in the long run?

VP: I think you would on some items … you can, in general, in life save a lot by switching to certain products, like an electric razor.

What are some of the craziest plastic-free solutions you found during your research? 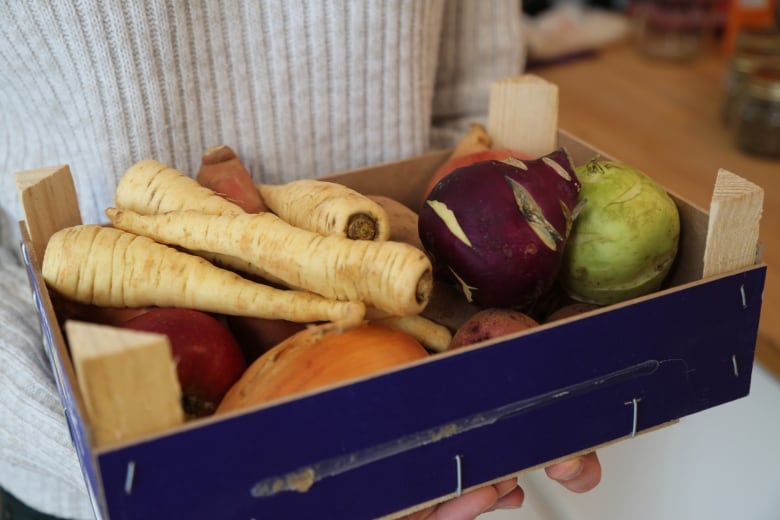 For produce without plastic stickers, Pruss hit up her local farmers’ market and used fruits and veggies from a farm box program. (Angela Bosse/CBC)

What are some plastic-free changes you actually liked?

VP: I did love discovering the bulk store and also going through the supermarket with a different mindset. Because usually you go in and you pick up one thing that you’ve been buying and you know the product but this kind of forced me to look around and really discover all the items that are available and try some different ones … even making your own cleaning supplies.

I think it’s nice to do the research and learn about what alternatives are out there and sometimes where you can save a little bit of money by making something that’s really easy to make. 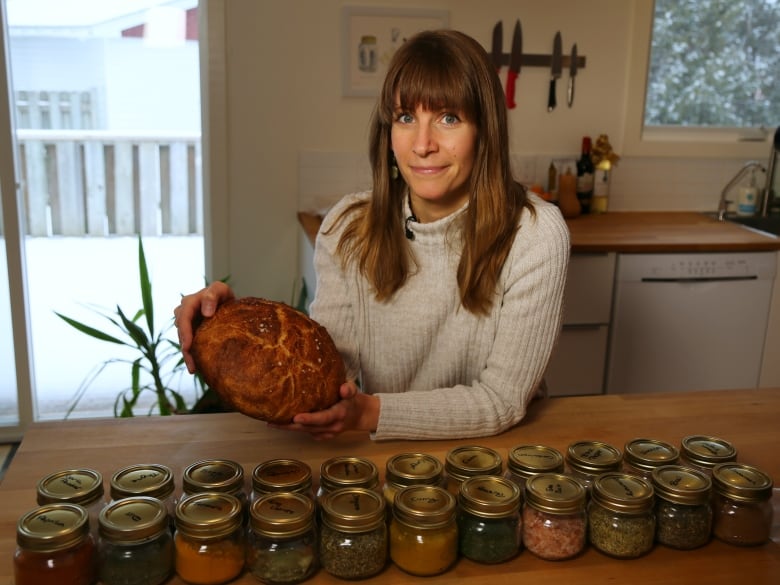 Spices and pantry staples, like flour and yeast to make bread, were easy enough for Pruss to find at bulk stores. (Angela Bosse/CBC)

What was your biggest takeaway from this project?

VP: I don’t think the responsibility for changing the way we deal with plastic should just be with the consumer alone. I think we are the ones that can push for the change but I don’t think we should be the ones carrying all the guilt. We live in a world that’s very plastic dependent … I think then it becomes more of a question of is there an alternative we can use instead [of plastic]? Because it’s sterile, it does keep bacteria out really well so there’s benefits to having it, there’s a reason it was invented. I think we need to look at that and find alternatives.

Waves of Change is a CBC series exploring the single-use plastic we’re discarding. You can be part of the community discussion by joining our Facebook group or email us: wavesofchange@cbc.ca.