Toronto marketing specialist Elaina Falcone laughs when she thinks back to about a year ago when executives at her company started walking around the office having phone conversations on headsets, resembling drive-thru employees.

“I would be like, ‘Can I take your order?’ while walking by them,” recalls Falcone, who works at Accessible Media Inc., a not-for-profit media company aimed at Canadians who are blind or partially sighted.

“Literally imagine a McDonald’s worker with a little mouthpiece in the front.”

Such headsets are now omnipresent at the company and many others in Canada as more organizations get rid of their cumbersome desktop phones in favour of cloud-based and Voice over Internet Protocol (VoIP)-powered service on wireless devices.

The days of cranking one’s neck to the side to hold a receiver in place, and using up precious desk space with a bulky phone and spiral cord, are quickly fading as businesses switch over to VoIP and cloud-based providers like RingCentral and Microsoft’s Skype for Business.

Desk phones are going the way of the dodo as more employees work from home or remotely, and companies replace assigned workstations with shared offices known as agile workspaces, where anyone can sit anywhere.

Many employees use laptops and smartphones and want that mobility and flexibility, says Falcone, noting it felt redundant having a personal cellphone, a work one and a desk phone.

According to an online survey of 400 small, medium and large companies released in July by IDC Canada, close to 90 per cent of Canadian firms have wireless phones and 49 per cent of their employees have substituted their landline phones entirely with wireless devices. 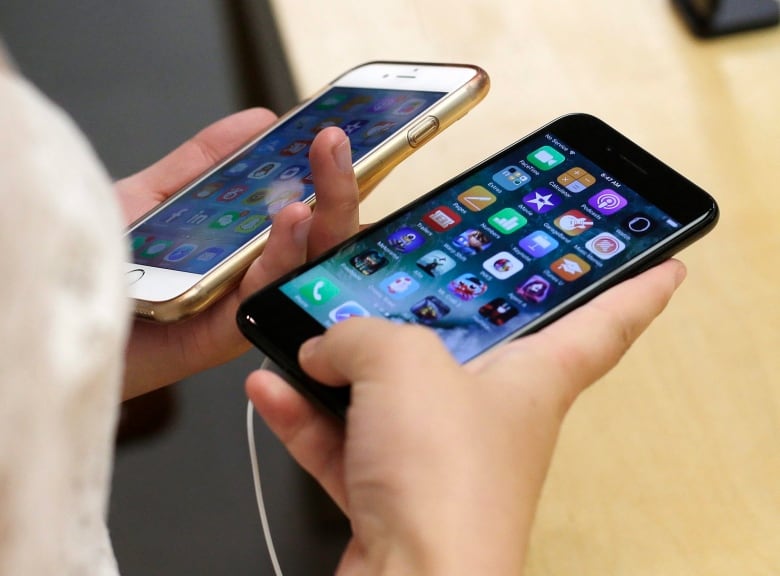 Many employees use laptops and smartphones and want that mobility and flexibility, says Falcone, noting it felt redundant having a personal cellphone, a work one and a desk phone. (Kichiro Sato/Associated Press)

“It’s almost like the last resort is a paperweight, tethered desk phone,” says Lawrence Surtees, vice-president of communications research at IDC Canada, which does market research on information and communications technology.

“The non-smartphone is a dying thing.”

Surtees say smaller businesses in Canada went wireless earlier than larger ones, which are now making the switchover due to cost, convenience, increasing trust in cloud computing, and an overall rise in cord-cutting in daily life.

That’s what happened when AMI added Skype for Business to its Microsoft Office 365 subscription, says Kevin Sharpen, who oversaw the project as manager of application development.

“We probably saved over 60 per cent of our phone costs,” says Sharpen, adding employees were able to keep the same work number.

“A lot of that is in long-distance costs, because on a regular phone system you’re paying long-distance. But when you’re talking on VoIP or a hybrid of that, those costs are significantly decreased.”

“With the advent of the cloud, organizations were able to reduce a lot of overhead and expenses by moving everything into the cloud and having people like Microsoft manage that cloud and make sure it’s more secure than what most companies had on presence,” says Inoue, whose company transitioned to Skype for Business two years ago.

“We’re already paying for [Microsoft] licences, so it’s very inexpensive to just add on the Skype for Business licence.”

Sharpen says those with accessibility needs often prefer a system like Skype as it’s easier for them to use and they can incorporate it with special devices, like custom-made headsets.

With Skype for Business, employees can integrate all of their Office products, record a call, notify others of their location and calendars, and collaborate through methods including video chat, instant messages and screen-sharing.

“It’s made the conversations or the meetings maybe a little bit more dynamic, because we have the option to share,” says Falcone.

For those who still prefer desk phones, some companies that have switched to VoIP systems still have a few of them kicking around, usually web-powered ones.

Surtees says the wireless trend can only go so far, noting it would be hard for certain institutions such as those related to health care and government to go wireless.

“I could see hypothetically wireless substitution in business getting up around 75 per cent or so, maybe a little touch more,” said Surtees. “But I think it would hit a ceiling.”

Falcone says she loves the portability she now has and rarely gets work-related voicemails anymore, because she’s usually reachable on her cellphone.

But being so accessible can also feel like you’re taking your work home with you, she adds.

Phone connections can also be weaker on a VoIP-powered service versus a landline.

And some employees are slower to adopt the wireless system.

“People freaked out,” Falcone admits of the switchover. “They were used to the security of their desk phone. A lot of our older staff I think took it harder than others.

“The thing I still struggle with is like, ‘Where’s my headset to answer this phone?’ Just dumb stuff like that.

“But I have to say after a couple of months everyone adapted and there’s literally no difference now. The first couple of weeks we definitely had laughs of VPs having headsets on their heads and then that was it.”