A BC Hydro lineman who was fired after being accused of stealing electricity to feed a cannabis grow-op on his property should get his job back, the Labour Relations Board has found.

The board recently upheld the decision of an arbitrator, who found BC Hydro had failed to prove that employee Lawrence Petersen had covertly installed a transformer and second electrical line to feed the operation on his Comox Valley property.

And Petersen actually had a licence from Health Canada to grow medical marijuana for sick family and friends, the board heard.

Petersen was fired from his job as a power line technician on June 27, 2013, after an internal investigation prompted by a tip from police, who suspected he was involved in illegal grow-ops at multiple sites.

His union, the International Brotherhood of Electrical Workers, grieved the dismissal, and in an August award, arbitrator Wayne Moore said he found Petersen’s defence more believable than his bosses’ claim that he was stealing electricity.

“In the final analysis, BC Hydro had little basis, beyond speculation, for this allegation. It follows that I find the employer has not met its onus to provide clear and cogent evidence with respect to a diversion or theft of power,” Moore wrote.

The arbitrator found that Petersen was entitled to reinstatement without loss of wages, seniority or benefits, a decision upheld by Labour Relations Board vice-chair Andres Barker on Nov. 30.

‘Unsatisfactory’ evidence from BC Hydro investigator

BC Hydro’s case largely relied on evidence from investigator Barry Hurrie, a former police officer who looks into electricity theft and power diversion for the utility.

But Moore described Hurrie’s testimony as “unsatisfactory in a number of ways,” describing him as overly confident, defensive and sometimes aggressive, and unwilling to consider facts that conflicted with his theory of what was going on.

“It was apparent from the outset that, when he received information from the RCMP in March 2011, he was predisposed to believe that the grievor was guilty of marijuana related offences,” Moore wrote. 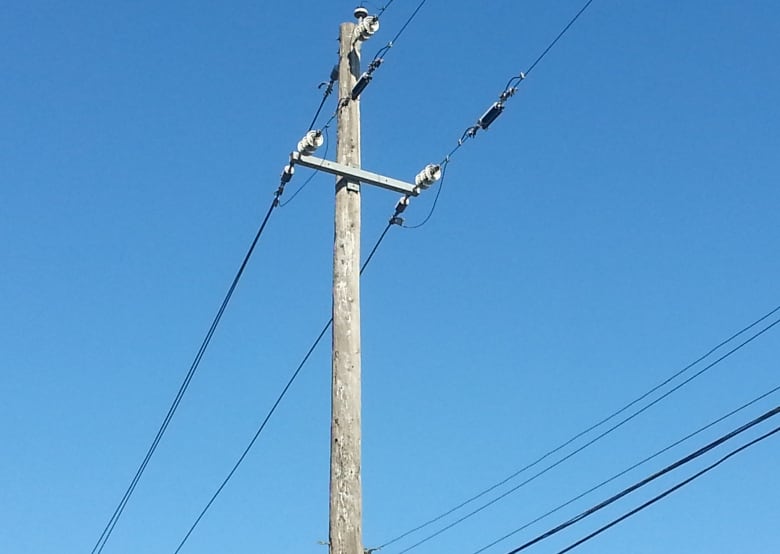 Petersen testified that the property had two power lines when he bought it in 2007. (CBC)

The BC Hydro investigation found Petersen’s property wasn’t serviced by the transformer listed in the utility’s database. Instead, it was using a more powerful transformer that was missing a serial number.

But other employees testified that BC Hydro’s records were unreliable, and the transformer installed at Petersen’s property wasn’t unusual.

Hurrie also submitted an image taken from Google Street View in October 2011 that appeared to show just one electrical line to Petersen’s property. Hurrie said that when he visited four months later, there were two lines.

Finally, BC Hydro alleged that Petersen had violated policy by not disclosing that he was growing cannabis under a licence from Health Canada. As it turns out, however, Health Canada had advised licensees not to reveal grow-op locations for security reasons.

“Accordingly, I find that this ground for discipline should also be rejected,” Moore wrote.

Though BC Hydro appealed Moore’s award, arguing it was right to fire Petersen, the Labour Relations Board found that the utility had been given a fair hearing and the decision was in line with provincial regulations.