They’re teeny, tiny plants and organisms but their impact on ocean life is huge.​

Phytoplankton and zooplankton that live near the surface are the base of the ocean’s food system. Everything from small fish, big fish, whales and seabirds depend on their productivity.

“They actually determine what’s going to happen, how much energy is going to be available for the rest of the food chain,” explained Pierre Pepin, a senior researcher with the Department of Fisheries and Oceans in St. John’s.

Pepin says over the past three to four years, scientists have seen a persistent drop in phytoplankton and zooplankton in waters off Newfoundland and Labrador.

“Based on the measurements that we’ve been taking in this region, we’ve seen pretty close to 50 per cent decline in the overall biomass of zooplankton,” said Pepin. “So that’s pretty dramatic.”

Measuring five millimetres or less, phytoplankton contain chlorophyll to capture sunlight and use photosynthesis to turn it into chemical energy, which is later eaten by ocean creatures. (Photo courtesy of DFO)

Scientists say local testing reveals half the amount of plankton in a square metre of water today. It’s not just a problem here, declining plankton numbers are a global phenomenon.

It’s a difficult idea to convey to the average person who might not understand the ocean ecosystem, but Pepin likens it to walking into a grocery store and instead of seeing the shelves full, they’re only half-full.

Listen to Jane Adey’s coverage on CBC Radio’s The Broadcast:

Hear about the problems for plankton. Reaction time to an offshore oil blow out. Can it be improved? 23:16

Alarm bells are going off

So what’s causing this dramatic decline?

Scientists here haven’t detected anything in particular that can be linked to the plunge in productivity, but they are worried. 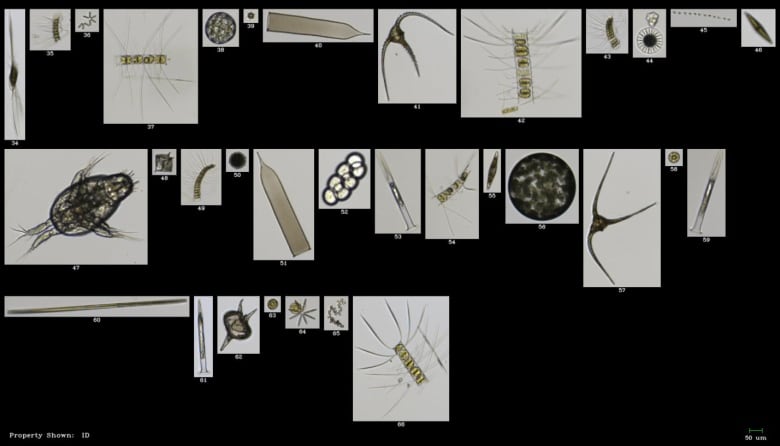 “When it persists — for in our case now for three or four years — in the back of my mind, at the very least, little alarm bells start going off because it means that something fundamental may have changed in the food web.”

Pepin says it is difficult to understand how long it takes the effect of this lack of basic food to make its way through the ocean ecosystem.

Scientists have to advise managers on how to handle fish stocks but without clear evidence of causes and effects, it becomes a very difficult job.

“How do we act on this? This is a real challenge.”