Climate change is causing glaciers in Alberta, British Columbia and Yukon to retreat faster than at any time in history, threatening to raise water levels and create deserts, scientists say.

David Hik, an ecology professor at Simon Fraser University, said the region is one of the hotspots for warming and the magnitude of change in the glaciers is dramatic.

“Probably 80 per cent of the mountain glaciers in Alberta and B.C. will disappear in the next 50 years,” he said.

The Peyto Glacier in the Rocky Mountains, part of Banff National Park, has lost about 70 per cent of its mass in the last 50 years, Hik said.

“It’s a small glacier but it’s typical of what we’re seeing,” he said.

Zac Robinson, a professor at the University of Alberta, said as the climate warms, the fragmentation of some of the large ice caps in the Rockies will continue.

Glaciers are formed when snow accumulates in the winter but doesn’t melt completely the following summer.

As the Earth warms at a faster rate, a combination of less snow and a rapid melt is causing glaciers to recede in length and volume, Robinson said.

The first State of the Mountains report, co-authored by Hik and Robinson and published in May by the Alpine Club of Canada, says outside of the ice sheets of Antarctica and Greenland, Canada has more glacier cover than any other nation.

Of the estimated 200,000 square kilometres of Canadian glaciers, one quarter is found in the west of the country and the remainder are in the Canadian Arctic archipelago.

Robinson said mountain glaciers, given their sensitivity to warming, are showing the earliest and most dramatic signs of ice loss, and the St. Elias Mountains in Yukon are losing ice at the fastest rate.

“Yukon glaciers in the St. Elias ranges have lost approximately one-quarter of ice cover since the 1950s,” he said.

Scientists studied the glaciers using a number of methods, including analyzing old photographs and remote sensing.

Hik said the rate of melting varies in different places in Western Canada. 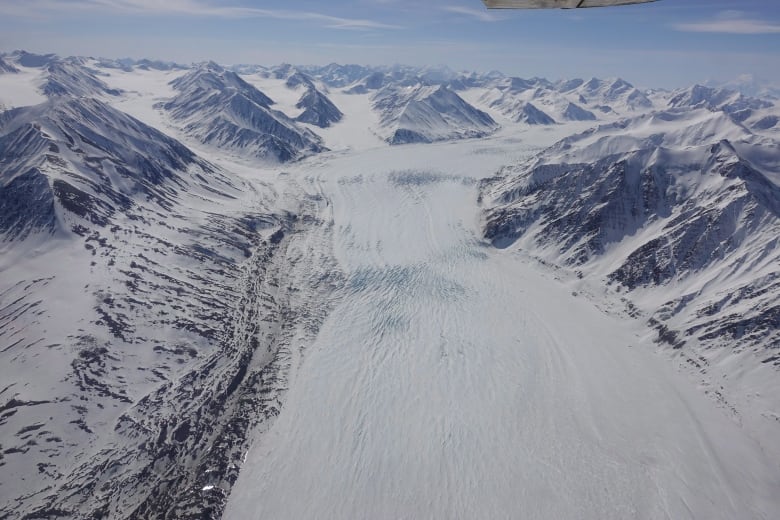 An icefield in the Saint Elias Mountains, where melting is at its most rapid. (HO-Zac Robinson/The Canadian Press)

“We don’t have detailed measurements everywhere but where we have measurements the rates can be 25 to 70 per cent [of melt] in the last six to seven decades.”

The rates of melting are similar to what is seen in the European Alps and the Andes, he said.

One of the first effects of melting glaciers is an increase in sea level, Hik said.

Melting of the St. Elias glaciers accounted for a 1.1 millimetre increase in sea level rise in the last 50 years, Hik said.

“That doesn’t seem like very much, but if you take the St. Elias Mountains, the Rocky Mountains and high Arctic mountains and the Himalayas-Hindu Kush and the Andes and the Alps, and if you put all of those contributions together, it counts for one of the largest increases in sea level over the past decade.”

While the melt increases water levels and sets off coastal erosion and flooding, it also causes dry areas and dust bowls.

As glaciers recede, more water flows downhill, but the further the ice sheets retreat, the less water there is to go down stream and soon the area begins to dry, Hik said.

“In places like the Kluane River in Yukon there is significantly more dust because the valley that the river flows through is essentially dried out,” he said.

But the area still experiences katabatic winds — winds coming off the glacier — which are quite strong and blow the dust from the dried stream beds further out on the landscape, Hik said.

This dust can create problems for vegetation by settling on trees and plants, and reducing photosynthesis, he said.

Glaciers act as a bank account during hot summers when water is scarce, Hik said. The melt also changes the way water flows and where it accumulates.

Robinson said mountains are recognized as sentinels of change because they respond rapidly and intensely to climate changes.

“Mountains give an important glimpse into the future and can show us what’s coming down the line,” he said.