They arrive alone, in pairs or in small groups, flying in from every direction just before dusk to a part of Halifax overlooking the Bedford Basin.

By the time twilight falls and the sky’s blue is deepening to black with every second, the treetops are filled with crows — thousands upon thousands of them.

“It just gets black with crows,” said Fleurette Sweeney, who lives at a retirement home for nuns behind Mount Saint Vincent University, which is pretty much ground zero for the nightly crow convention. “It’s hilarious. The cacophony of sound is incredible.”

The crows congregate throughout the fall and winter to fulfil whatever innate longing they have to caw with abandon and be with their bird brethren.

They’ve been flocking to the area between about Seton Road and Flamingo Drive for decades in numbers that have been estimated at up to 8,500.

Amanda Dodsworth, who grew up on a nearby street and still lives in the neighbourhood, said she recalls seeing them in the early 1980s, and her mother remembers them in the area as far back as the 1960s.

By the time Dodsworth was a teen, the natural phenomenon had taken on a slightly creepy bent, with the theory that each crow was a nun from the Sisters of Charity Motherhouse who had died and returned for a visit.

“We used to drink up in those woods when we were 13 and 14 years old and there was always the scary story about the crows following you or watching you,” she said. The crows have been gathering at the roost for at least 60 years. (Robert Short/CBC)

Kevin McGowan, a crow specialist at the Cornell Lab of Ornithology in Ithaca, N.Y., said crows have been known to return to the same roost for 100 years. While the biggest roost he’s seen had about 100,000 crows, one in Oklahoma was estimated to hold over two million.

It’s unknown how far crows travel for their gatherings, but 15 kilometres would be “no big deal,” McGowan said.

But the reason for these meetings is still somewhat mysterious.

Two of the main theories include sharing information, including about food sources, and protection from predators.

“The great horned owl is the bogeyman,” said McGowan. “It is the thing that comes and gets you in the middle of the night and eats you.”

The crows have occasionally caused concern on the MSVU campus.

Retired professor Fred Harrington, who taught animal behaviour in the psychology department for 33 years, said early in former NDP leader Alexa McDonough’s stint as interim university president, she was working late on campus one night and “all of a sudden she saw the sky fill with crows.”

“She wondered whether she should call security,” he said. “She was kind of baffled by the whole thing.”

For a while, hundreds of crows would roost in a cluster of trees along a steep path between the library and cafeteria, and students were “terrified” of them, Harrington said.

“You have … several hundred crows that are going to defecate at some point during the night onto that path, so the path actually became kind of treacherous and slippery,” he said. Crows have been known to visit the same roost for 100 years. (Robert Short/CBC)

Some of his students used a helium balloon covered with a black garbage bag with two paper eyes taped on it to deter the crows, but that didn’t work for long. A falcon, too, had a short-lived effect, but Harrington said it was only when some of the longer branches were trimmed that the “whitewashing” of the path stopped.

For the most part, though, Mount Saint Vincent University has embraced its noisy neighbours. The campus lounge is called the Crows Next, there’s the Crow ‘n’ Go convenience store and earlier this year, the university even retired its mascot, Monty the mountain lion, in favour of a new one: Captain the Crow.

But not everyone is so enthusiastic.

Some neighbours complain that the crows poop on their car, tear up their lawn or even peck holes in their roof.

McGowan has seen both the good and bad sides of crows.

The birds are able to distinguish humans from one another, and that can be a blessing or a curse.

McGowan often tags baby crows in their nests, and the adults, to put it mildly, do not look favourably on that.

“I’ve had up to 75 crows mobbing me when I go to a nest … flying overhead and yelling and insulting my ancestry and stuff like that — generally noisily expressing their displeasure at my presence on the planet.” 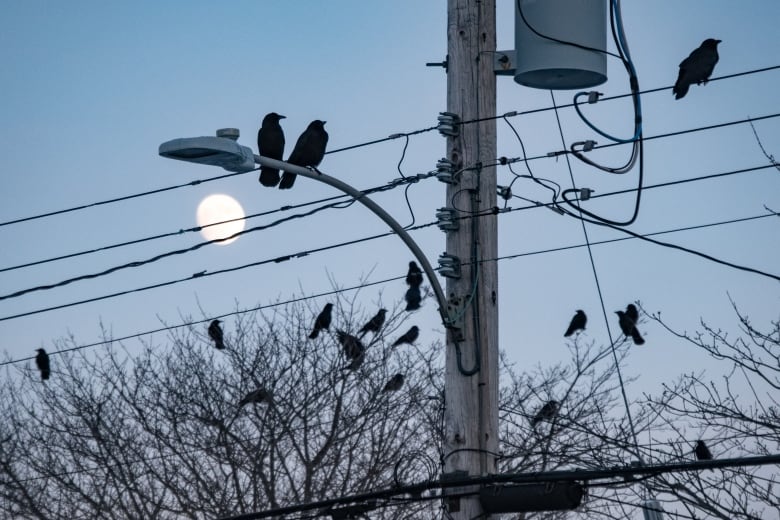 Some neighbours say the crows poop on their cars, tear up their lawn or even peck holes in their roofs. (Robert Short/CBC)

The crows began to recognize McGowan when he was nowhere near a nest, too.

Eventually, he decided to make friends out of his enemies. McGowan now carries unshelled peanuts with him wherever he goes, and the crows know it.

‘One of the most fascinating animals on the planet’

They pick him out of a crowd no matter what he’s wearing and they spot his white Subaru — “and trust me, there are a gazillion Subarus in Ithaca” — going 100 kilometres an hour and fly around it until he tosses peanuts out the window.

McGowan said crows are “one of the most fascinating animals on the planet,” and people should appreciate them for the amazing creatures they are.

“I think crows are awesome and people often don’t give them the thought that they deserve,” he said.

Canadian economy was resilient in 2018, but troubling signs ahead