There’s no shortage of memorable moments in Ontario politics in 2018. The challenge is trying to pick just the top five.

It was bound to be an interesting year, with the unpopular Liberal government of Kathleen Wynne facing an election, and the Progressive Conservatives, after 15 years in Opposition, looking to regain power under leader Patrick Brown.

And then, stuff happened, and 2018 unfolded in a way that nobody predicted last December.

Here’s my list of the five most dramatic moments of the year.

Premier Doug Ford’s move to cut the size of Toronto city council came out of the blue when he announced it in late July, with the municipal election campaign already underway. The battle moved from the Ontario Legislature to court, and after a judge ruled the move violated the Charter of Rights, Ford announced that the province would for the first time in history invoke the charter’s notwithstanding clause.

Anger over the use of the notwithstanding clause by Ontario Premier Doug Ford is creating chaos in the Ontario Legislature and Toronto city council. There were plenty of disruptions as protesters and NDP MPs had to be removed. 3:36

To push that through the legislature, Ford called a rare overnight sitting at Queen’s Park on Sept. 17. As MPPs debated from midnight onward, people watching from the gallery started shouting, and were led away by security guards, some in handcuffs. The Speaker cleared the chamber, prompting the protest to move outside and gain in volume.

Despite all the fuss, the bill passed, the number of Toronto city councillors was cut in half, and the municipal election went ahead as scheduled.

By the final weekend of the election campaign, most pollsters and pundits had concluded that Wynne’s Liberals were not going to win. Still, when Wynne publicly said so herself five days before voting day, it made for a remarkable moment. Wynne’s declaration was the official word that 15 years of Liberal government had come to an end.

Wynne’s voice trembled with emotion as she was asked to describe what the moment was like for her.

Election nights are often dramatic and suspenseful because of the time it takes for the results to be clear. This election, with electronic tabulators counting the ballots that had already been fed into the machine, and with the Progressive Conservatives’ strong showing across the province, the CBC Decision Desk projected only 14 minutes after the polls closed that Ford’s PCs would form the government.

When such a historic election night is not the most memorable moment of the year, you know it’s been a roller-coaster.

In 2017, PC Leader Patrick Brown was still struggling for recognition, even though he was poised to become the next premier. That all changed on Jan. 24. Brown called reporters to Queen’s Park for an urgent late-night news conference. Mere minutes before CTV News aired a report in which two women accused Brown of sexual misconduct, he delivered an extraordinary and emotion-filled statement denying the allegations, then dramatically walked away, refusing to answer questions.

Despite Brown’s denials, he lost the backing of his caucus and top staff and was forced to resign, in a statement sent out in the wee hours. It plunged the PC Party into chaos, with the start of the election campaign barely three months away.

But Brown did not let that be the end of his political career. He ran for mayor of Brampton last October, and won with about 44 per cent of ballots cast, unseating 4-year incumbent Linda Jeffrey.

Leadership races usually happen within parties that are out of power, or are trying to cling on to power. The PC race was a rarity, given that the party was favoured to win the coming election after 15 years in Opposition. The battle between Ford, Christine Elliott, Caroline Mulroney and Tanya Granic Allen was therefore bitter and topsy-turvy, in no small part because of Brown’s on-again, off-again attempts to get back his old job. 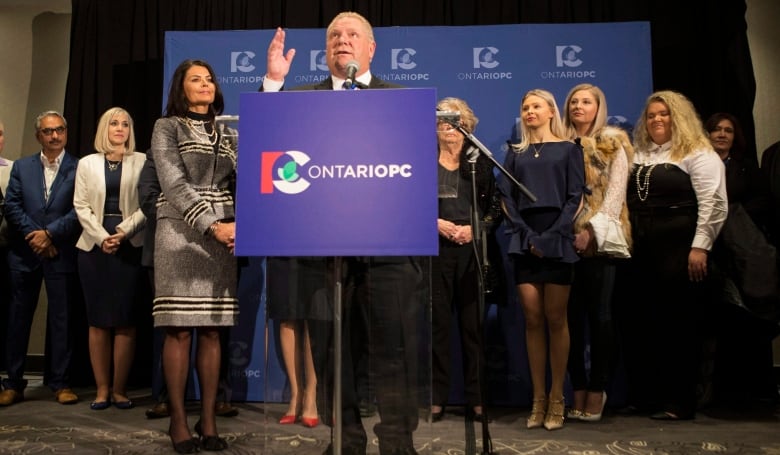 Ford was named the new leader of the Ontario Progressive Conservatives on March 10 in Markham. (Chris Young/Canadian Press)

But the biggest drama came on March 10, the day for announcing the results. It was supposed to happen at 3 p.m., but time ticked by with no official explanation from the party. Reporters learned that lawyers and senior campaign officials for Ford and Elliott were in locked rooms arguing about the vote count.

Then, sources with direct knowledge of the results told me that although it was extremely close, Ford had won, and Elliott was disputing his victory.

A couple more hours passed, with no official word about anything from the party. Then officials announced to the PC members that they had to clear the hotel ballroom and go home. Finally, some six hours after the result was supposed to be announced in front of hundreds of cheering supporters showered by colourful balloons, party officials anti-climactically read the numbers in a tiny meeting room to a smattering of applause, declaring Ford the new PC leader.

While the day was packed with drama, it was also the most politically consequential day of the year. The result was so close: Ford beat Elliott by just one percentage point. Had Elliott squeaked out the victory, she would be premier now, instead of Ford.