Trevor MacDonald from Murray River, about 55 kilometres southeast of Charlottetown, proudly holds up one of his newest chickens — a silver spangled Hamburg that he hopes will be a contender in next year’s poultry shows.

This particular breed originated in northern Europe hundreds of years ago. “It was the first breed I had when I started as a kid and you kind of get attached,” MacDonald said.

“There’s six colours of the breed,” he said. “I’ve raised all six colours of them one time or another and just the shape and the symmetry and the colour, all those things together have made it one of my choice breeds over all these years.” 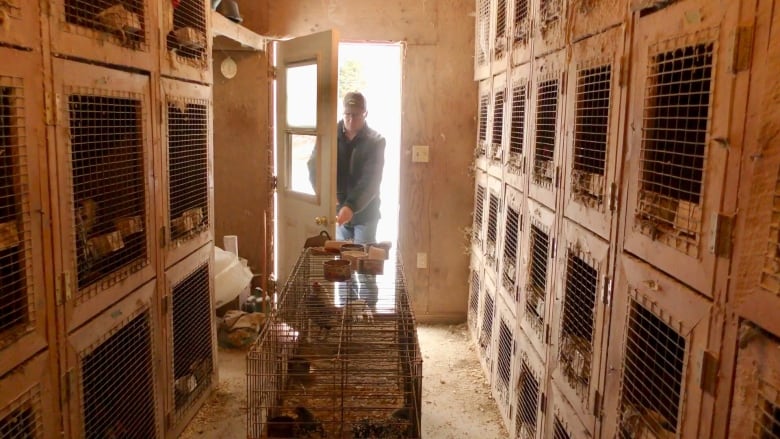 ‘I’ll buy mature breeding stock and then raise the chickens from them and then at the end of the year, go through them, and pick out the good ones,’ says MacDonald. (Pat Martel/CBC)

MacDonald, who’s a substitute teacher, has about 150 fancy chickens and 50 show pigeons in his coop. But it’s the chickens that stole his heart long ago.

He started showing them at local fairs 40 years ago. “I got into it as a kid. My dad had a few, a couple of great uncles that were into it at that time and some cousins.”

‘These were the only breeds’

Although silver spangled Hamburgs may look good, they don’t lay a lot of eggs like their commercial cousins. But MacDonald is unapologetic. “These were the only breeds that were … on the family farm a hundred years ago.

“They don’t have a place in modern day commercial agriculture because they don’t grow fast enough,” MacDonald said. “They don’t lay enough eggs in the run of a year like the commercial strains do.” 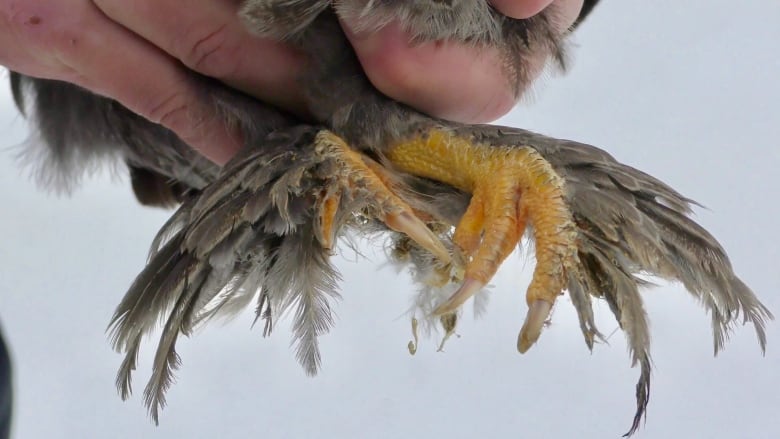 MacDonald is doing his part to keep the heritage breeds alive. “If it weren’t for the purebred breeders, these breeds would be a thing of the past.”

MacDonald knows what judges look for in a show breed. After all, he’s been showing his birds at the Royal Winter Fair in Toronto for 36 years — a reminder of a time when chickens were valued not just for the number of eggs they laid, but for their inherent beauty. 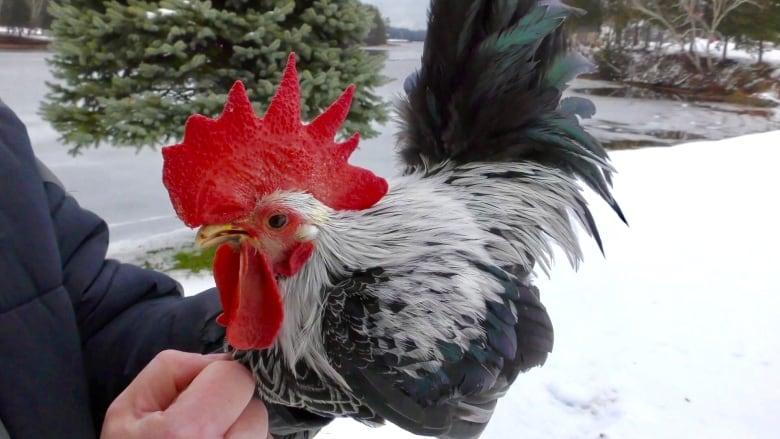 ‘There’s no money made in this game,’ says MacDonald. ‘When you look at the bills at the end of the year, it’s a hobby. It’s been a fun one for a long time.’ (Pat Martel/CBC)

‘Nice comb on him, nice head’

Over the years, MacDonald’s chickens have strutted home with dozens of ribbons from competitions in Canada and the U.S.

He gently strokes the feathers of his contender, pointing out some its outstanding features. “Judges are going to be looking for size, the shape of the breed. Nice comb on him, nice head.

“The comb should be pointed at the back like he is, and nice and wide at the front with the little bumps on top.” 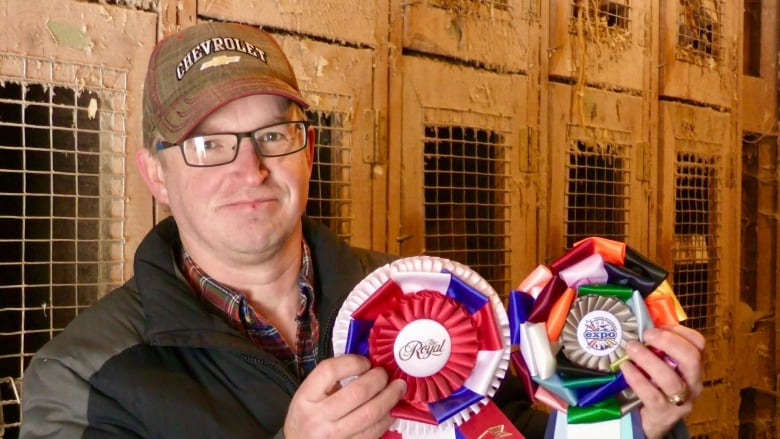 ‘Thirty-six years in a row at the Royal and very few Islanders have shown any exhibits at the Royal for that many years, so it’s something to be proud of,’ says MacDonald. (Pat Martel/CBC)

The show judges follow written standards, even giving points for the proper leg colour. “Slate blue and that’s the required colour,” MacDonald said. “Some have black legs, some have yellow legs. This breed calls for blue so they have to be the blue legs.”

And there’s more.”The tail and the feathering should all have these nice rich spangles on them, these black tips on the feathers all the way through, so all those things combined, the judge is going to compare him to the next one in the pen.”

While silver spangled Hamburgs are MacDonald’s favourite breed, he likes to try new ones. He’ll buy mature breeding stock and then raise the chickens from them. 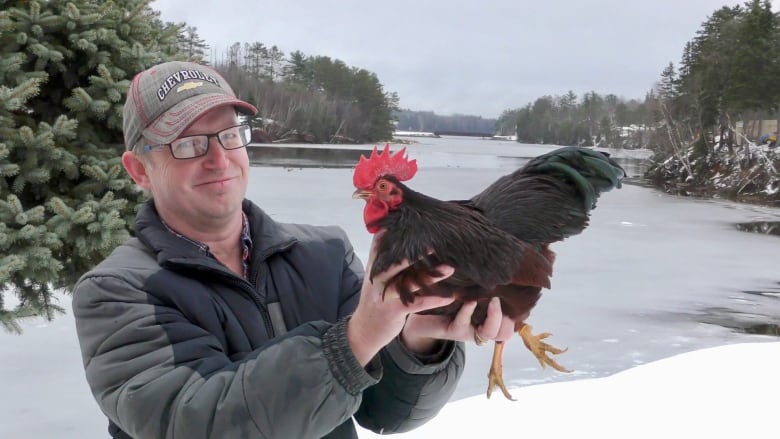 ‘These were the only breeds that were the on the family farm a hundred years ago,’ says MacDonald. (Pat Martel/CBC)

“This one I picked up at the Royal, so I’ll use it as a breeder for next year.”  The chicken has fluffy feathers growing around its legs, “Somebody got the idea of breeding for certain characteristics and that became a characteristic of the breed.”

MacDonald never tires of going to the fairs. It’s his 36th year in a row at the Royal. “Very few Islanders have shown any exhibits of any kind at the Royal for that many years, so it’s certainly something to be pretty proud of — to be part of it for so long.”

‘They taste a little bit better’

One of the questions MacDonald gets most from a curious public stopping by his booth during fairs is whether his fancy chickens taste as good as their commercial counterparts.

“Some would argue they taste a little bit better, because they’re home-raised, they’re not pushed through the system.” 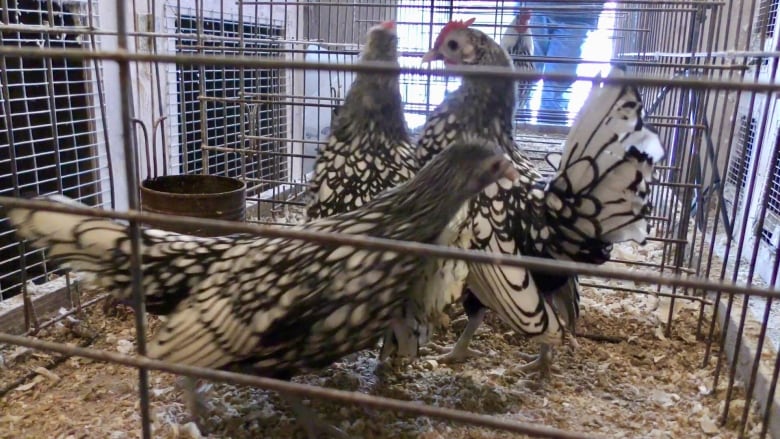 ‘It’s 40 years ago since I started showing chickens,’ says MacDonald. ‘My dad had a few, a couple of great uncles that were in it and some cousins and we all kind of got at it.’ (Pat Martel/CBC)

MacDonald added that the chicken you buy at the store was probably only eight weeks old when it was killed while his chickens that don’t go on tour are about eight months old when they’re eaten.

But the show birds that join the travelling team usually don’t end up on the table. “Once they get old, they’re going to get tough.” 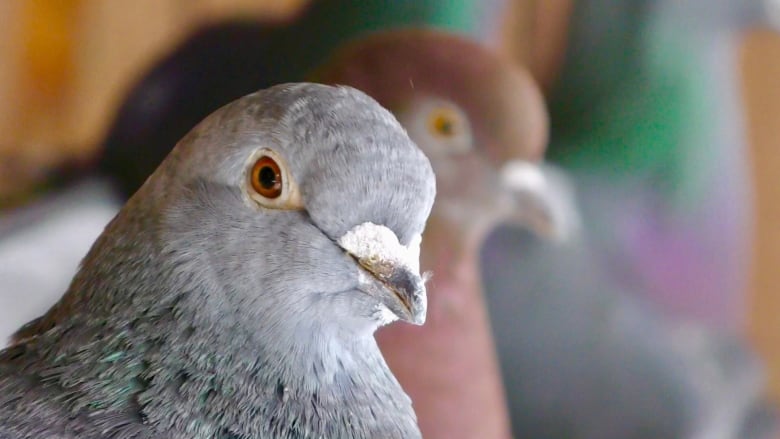 ‘I had about a dozen pigeons at the Royal and they placed very, very well — as well as the chickens did,’ says MacDonald. ‘I’ve shown pigeons for probably 35 years.’ (Pat Martel/CBC)

So is this a hobby or a business for MacDonald?

“Business? Are you kidding? No, there’s no money made in this game. It’s a hobby, that’s all it ever is,” he said.

‘Not a money-making proposition’

“If you’re going to have healthy livestock, you gotta feed them well,” he said. “Certainly, it’s not a money-making proposition when you look at the bills at the end of the year.

Who will rebuild after a climate disaster as workers retire and weather worsens?