More than 2,800 people have signed a petition to protect endangered birds at Esquimalt Lagoon … although the feathered creatures are not actually real.

These fowl, made of driftwood, were created by Langford’s very own bird man.

Since the spring, artist Paul Lewis has crafted 50 of them.

The former criminal-turned-artist has a passion for larger-than-life swans, ravens and owls. But he knows some find his fowl … well, foul.

Lewis admits the birds are not to everyone’s taste.

“But what kills me is every time someone smashes or breaks them, they think they are doing something negative to discourage me — it actually empowers,” he said.

He asked for public support on social media over the holidays after a bird was broken and admits he’s protective of his art.

He puts his personal phone number on each bird, so he can fix any problems. 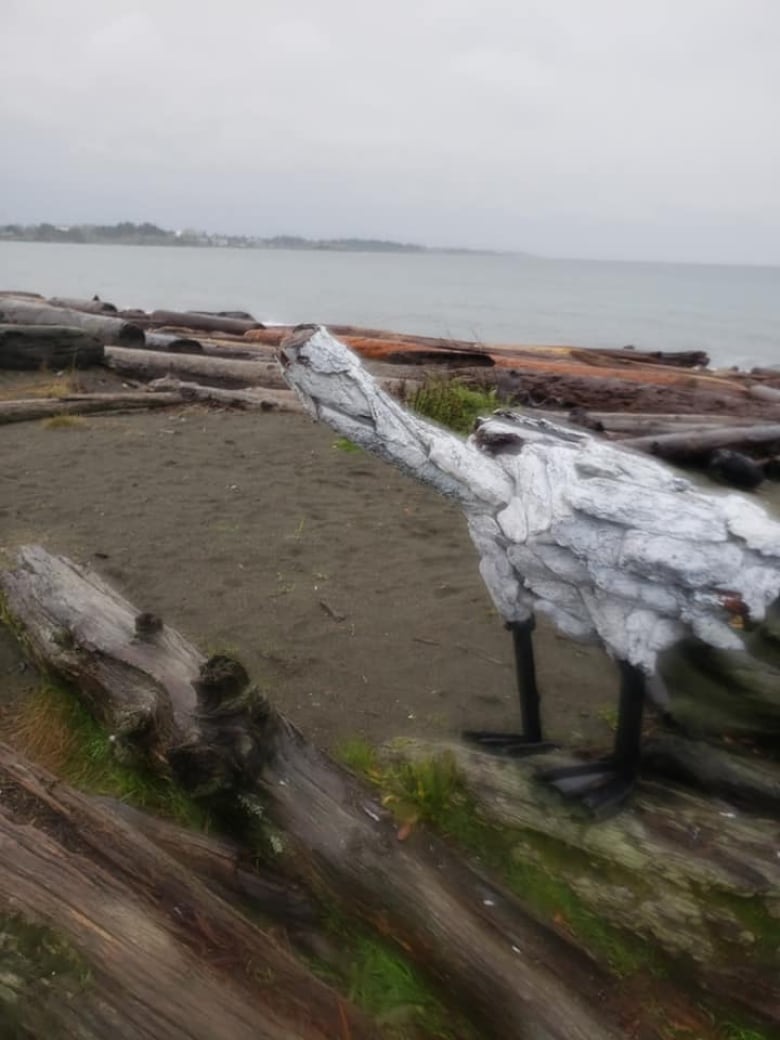 This swan mysteriously lost its head in late December after artist Paul Lewis says he got a series of angry messages from a man who threatened to ruin the wooden art at Esquimalt Lagoon. A teen, not the author of the threatening messages, admitted to the damage and said it was an accident. (Paul Lewis/Facebook)

He does not want nails or bits of broken birds littering the beach.

And he said the birds are symbolic of how art helped lift him from a downward spiral 20 years ago.

Lewis once levelled a sawed-off shot gun at a clerk and it misfired grazing the man’s leg.

He was serving an eight-year sentence after a string of armed robberies he said were fuelled by cocaine addiction when he connected with inspiring First Nations artists through prison programs. 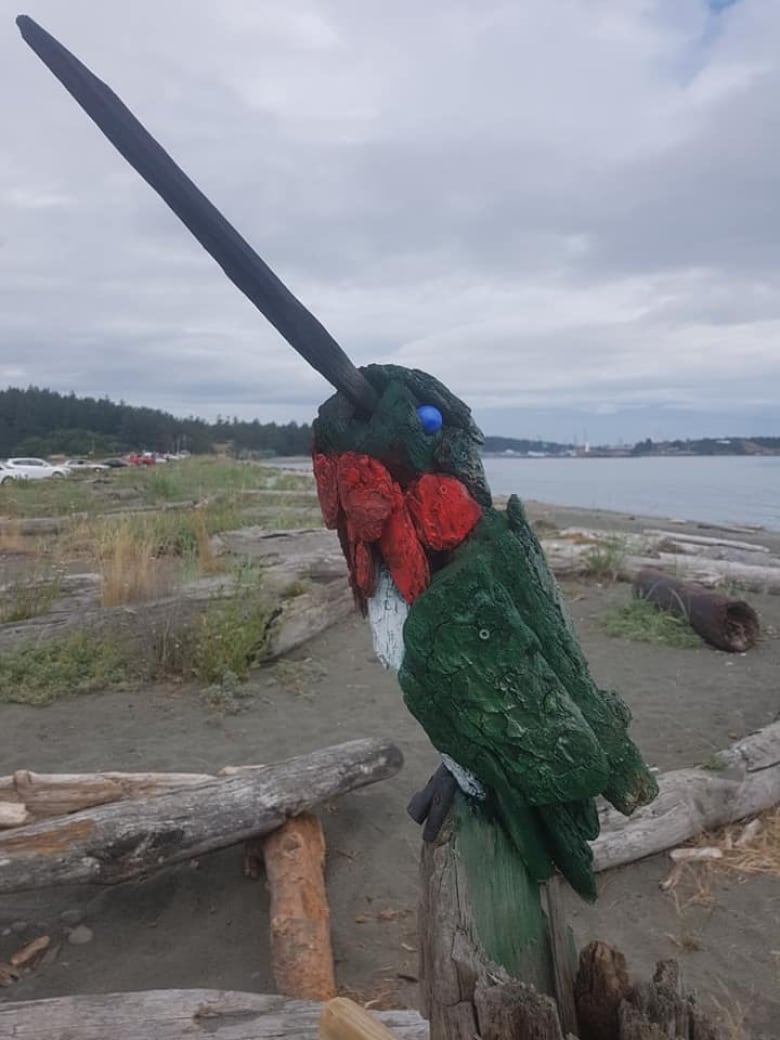 The Vancouver Island artist that fashions wooden beach birds found at Esquimalt Lagoon, like this hummingbird, turned his life around after prison. (Paul Lewis)

“I was in a bad place and time in my life,” he said. Lewis says art and prison programs were key to how he turned things around.

Once he’d served his time, he rebuilt his life as a carpenter, scaffolder and sometime oil field and shipyard worker.

But of late his passion — is beach birds.

He spends about five hours on each one.

He said that he was first inspired seeing artist Alex Whitcomb’s driftwood creatures in Colwood. 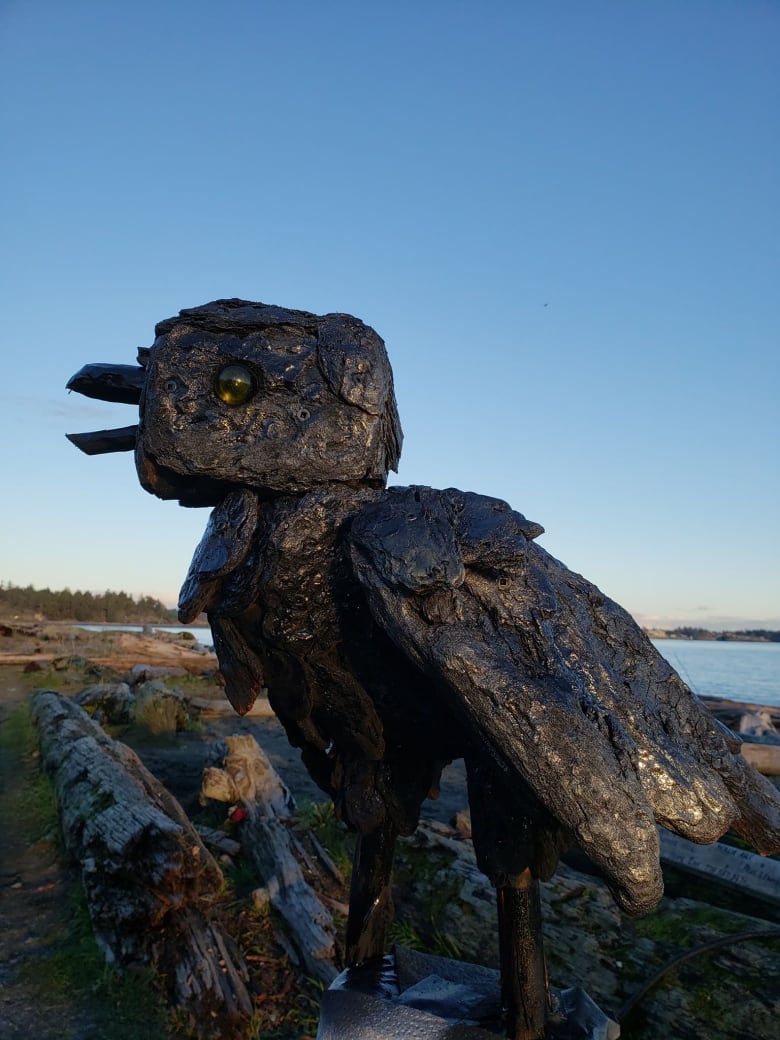 Birds like this have some people all aflutter. (Paul Lewis/Facebook)

The city gave Lewis a spot between garbage can #23 and #25, where his oversized wooden birds are allowed to stay.

But some birds have disappeared — perhaps stolen.

Others have been damaged since they began appearing last spring.

‘He wants to smash them apart’

When one man began texting him insults — calling the birds “eye pollution” and “crap” in December, he suspected the critic might be damaging his work and asked people for help to protect the birds.

Thousands signed a petition within days.

“He needs to get a life,” wrote Gord Little of Victoria.

Others talk about how the birds brighten their walk on the beach.

“My kids and I love seeing the birds when we go to the lagoon,” wrote Christina Pelletier.

So Lewis reached out the the critic attacking his faux fowl.

“[He said] they are disgusting and has said he wants to smash them apart with a bat and wants them gone,” Lewis said.

“He said they were like Grade 2 artwork and belonged in a flea market.” 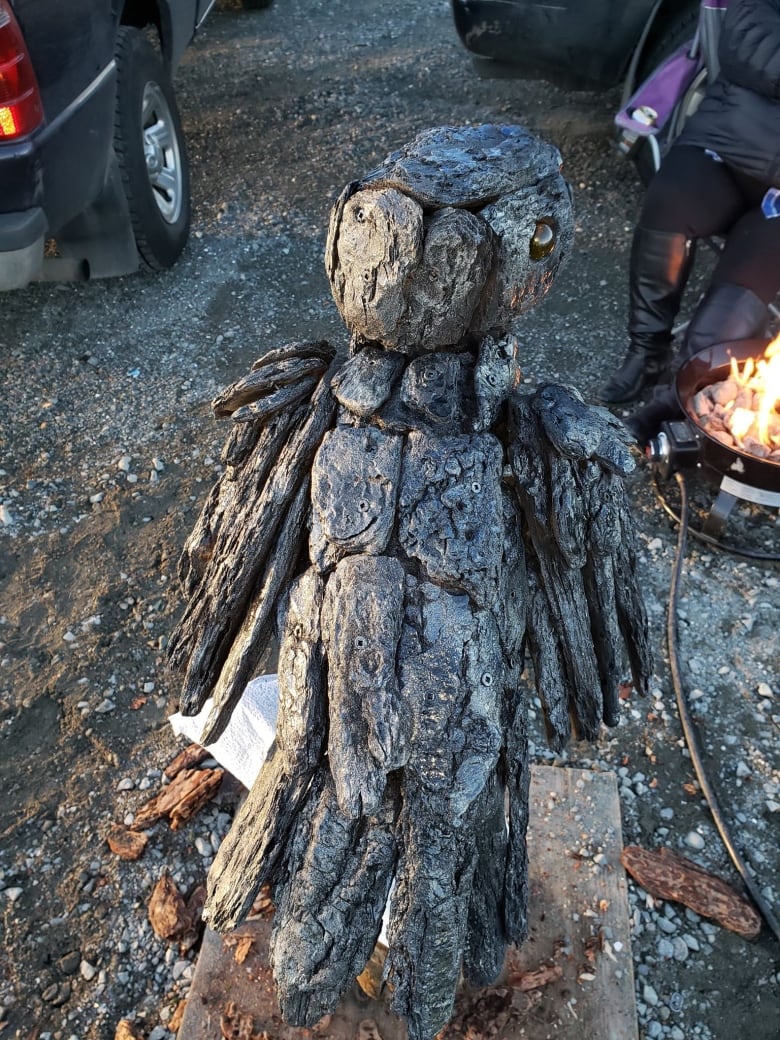 The wooden birds made of driftwood and scattered about the beach area of Esquimalt Lagoon in Langford include ravens, a swan and an owl. (Facebook)

After that, Lewis noticed his swan had lost its head. But it turned out that damage was an accident.

Lewis said a teen came forward and apologized which Lewis lauded as very “stand up” of the young man who made a mistake.

The swan now has a new head.

Since then, Lewis also found his first creation — a bald eagle — destroyed by wind.

But he plans to keep making birds, buoyed by all the support.

“It blows me away. I call my Mom. I think it’s pretty cool.”