A new study is taking the fight against microfibres in the Great Lakes back to the source: washing machines.

The tiny particles of plastic are shed by synthetic fabrics like nylon and fleece when they’re washed, slipping through water treatment plants and into the lakes.

To stem the flow, researchers will install about 100 special filters on washing machines in Parry Sound, Ont. to see if they reduce the amount of plastic particles that show up at the town’s water treatment plant.

“We think that because Parry Sound is small, there might be a noticeable decrease,” explained Lisa Erdle, a PhD student at the University of Toronto’s Rochman Lab, who is leading the project.

Worse than the Pacific Ocean

The presence of microfibres in the lakes is well documented.

David Sweetnam, the executive director of Georgian Bay Forever, told CBC’s Ontario Morning that a study last year found microfibres in 80 per cent of the treated drinking water tested from cities around the Great Lakes.

That figures, said Sweetnam, considering that a single synthetics-heavy load of laundry can send as many as 100,000 particles into the water. 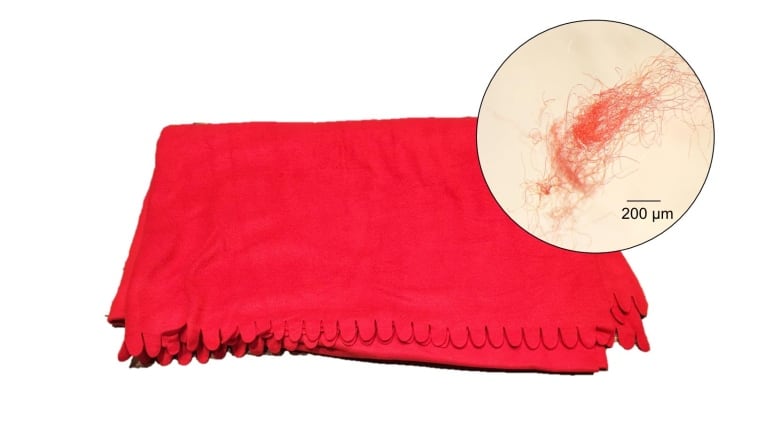 A fleece blanket is shown with the microscopic plastic particles it sheds when washed. (Lisa Erdle and Sam Athey)

“[Microfibres] are in fact cycling around now in the Great Lakes at a greater density than you find out in the Pacific Ocean,” he said.

Erdle also gathered Lake Trout and Rainbow Smelt from Lake Huron and Lake Ontario, telling CBC Toronto she found microfibres in every single one she tested.

‘We’re being exposed to our waste’

Less well known, however, are the impacts of consuming microfibres on human health.

“What we do see is that it’s in fish, it’s in drinking water, and we’re being exposed to our waste,” said Erdle.

“We don’t know what that could mean for human health. I know I don’t want to be eating our trash.”

She says research is underway to gauge exactly how the tiny particles affect us, but evidence is accumulating suggesting that microplastics — of which microfibres are one of the most common examples — takes a heavy toll on ecosystems in general.

The washing machine filters will be installed outside of the machine on the wall for the duration of the two-year study, explained Sweetnam.

“The filter unit has a filter bag in it, like a very fine mesh… and then the water that comes out of the microparticle filter has almost 90 per cent fewer particles in it,” said Sweetnam. 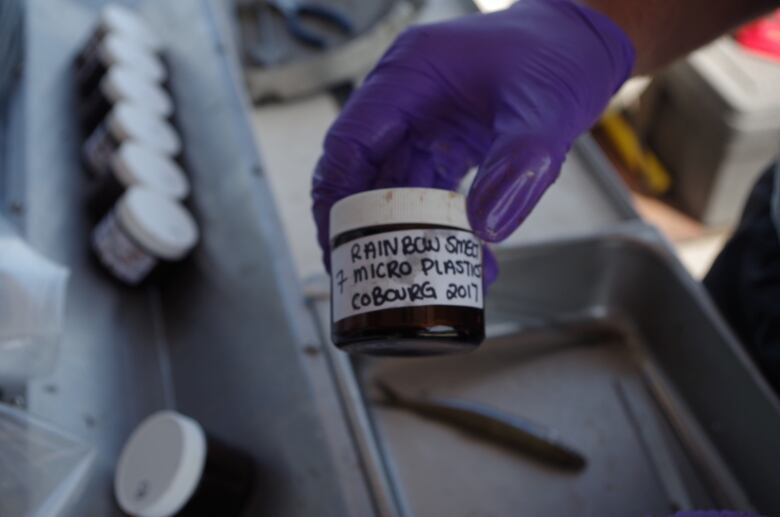 Until 2011, there were no scientific techniques to measure microfibres. Now, thanks to new techniques, Erdle is able to find and measure the particles inside fish. (Lisa Erdle)

He says his organization is looking for between 100 and 200 Parry Sound volunteers to sign up to get one put on their washing machine.

That’s part of the project, explained Erdle — to get people outside the scientific community involved in the fight, and boost the profile of microfibres as an environmental issue.

Her hope is they can become as prominent as another aquatic issue: the microbead, once found in toothpastes and cleansers but banned by the Canadian government in 2017.

“We very easily and very quickly phased [microbeads] out,” she said.

“I think there are likewise easy solutions to limit microfibres from the environment, and it might be as simple as putting a filter on a washing machine.”

Phoenix ‘pay pods’ show some success, but still no word on overall fix