The deadline to register long guns in Quebec is fast approaching, but the National Firearm Association is encouraging members to wait until the last minute to comply, as a form of protest.

The province’s long-gun registry will go into effect Jan. 29, on the two-year anniversary of the Quebec City mosque shooting.

Guy Lavergne, a lawyer who represents the NFA, told CBC’s Quebec AM that many gun owners in the province are not happy with the new rules.

“I would say that the chances of a significant compliance level being achieved by Jan. 29 are slim [to] none,” he said.

Lavergne made it clear that the NFA isn’t encouraging its members to break the law, which would mean facing fines of up to $5,000, but merely to put pressure on politicians to extend the deadline. 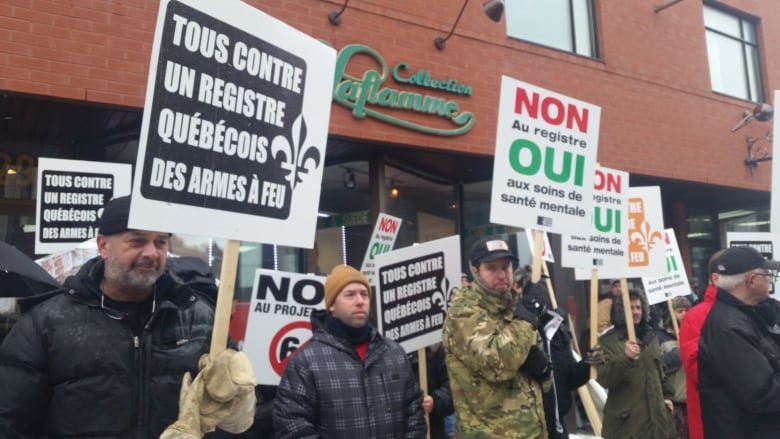 Those opposed to the long-gun registry protested to try to block it from going into effect. (Antoni Nerestant/CBC)

He said that sport shooters and hunters feel unfairly targeted by the regulations as if they were potential criminals.

Lavergne said the new rules mean gun owners will have to carry proof of registration with them and present it to police or conservation officers if asked.

Heidi Rathjen survived the Polytechnique Massacre in 1989 and thinks the government should start issuing fines as soon as the deadline passes.

“I think it’s really important for the government to take a strong stand and say that the penalties will apply on Day 1,” she said.

“If they don’t do that, they are kind of encouraging the boycott.”

The province started working to create its own long-gun registry after the federal registry was dismantled in 2012.

The accompanying legislation, Bill 64, was adopted by the National Assembly in June 2016 with cross-party support.

The NFA and a Quebec-based pro-gun group argued in court that the province infringed on federal jurisdiction when it passed its long-gun registry law.

In October, a Quebec Superior Court Justice rejected the bid to stop the registry.

Most guns still not registered

The government has put the number of long guns — mostly shotguns and rifles — in Quebec at roughly 1.6 million.

The registration service is accessible online and users are able to register for free.

But as of Dec. 21, only 284,125 guns had been declared, according to a spokesperson for the Public Security Ministry.