An extreme avalanche alert has been issued for the South Coast and Sea to Sky regions of British Columbia as a winter storm dumps heavy snow and rain, making travel treacherous.

The rarely used warning from Avalanche Canada means all potential avalanche terrain must be avoided at all costs, as natural and human-triggered avalanches are a certainty.

“There’s a significant number of large to very large natural avalanches expected today, and some of that may persist tomorrow,” said senior forecaster Grant Helgeson with Avalanche Canada.

“That’s really due to a very powerful winter storm has brought heavy precipitation to the coast — along with quite a bit of wind — that is creating a lot of natural avalanche activity,” he said.

The agency has also issued high avalanche danger warnings for the South Columbia, Columbia and Cariboo regions, and Glacier, Yoho and Banff national parks. The danger is also high in the alpine areas of the Purcell Mountains and South Rockies.

Helgeson said area ski hills are still safe because patrols are knocking down and controlling the avalanche hazards. 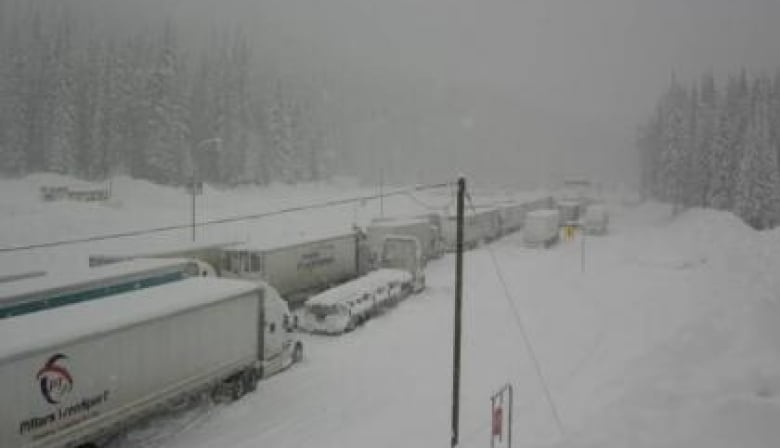 Traffic is jammed, looking east along Highway 1 near Parks Headquarters at Glacier National Park, 72 kilometres east of Revelstoke just after 6:40 a.m. PT Thursday. The highway has been closed in both directions near Revelstoke and Golden due to avalanche control. (DriveBC)

Travellers using mountain passes around the southern half of B.C. should expect challenging conditions Thursday, as another winter storm leaves many routes in miserable condition.

Environment Canada has issued winter storm warnings for most major passes to and from the Interior, including the Coquihalla Highway from Hope to Merritt, where snowfall of up to 35 centimetres is possible by Friday morning.

The Rogers Pass stretch between Revelstoke and Golden was closed for avalanche control work as of 6 a.m. PT Thursday. The estimated time of reopening is 8 p.m. PT.

The weather agency said a snowstorm is expected for the area, with up to 50 centimetres of powder expected to fall over the pass before Friday.

Drivers are being advised against travelling at all between Golden and the Perry River Bridge, east of Sicamous, due to the weather.

There are at least five other highway stretches closed across B.C. for planned avalanche control on Thursday.

The Sea to Sky Highway was also shut down in both directions Thursday morning between Soo Valley Road and Nairn Falls Park Road. The estimated time of reopening is 1 p.m. PT.

This week’s storm has already dumped snow on northeastern parts of the province and battered the Central Coast with high winds, while the southern Interior and South Coast have also been pummelled by the weather.

Snowfall, wind, rainfall and winter storm warnings are in effect for nearly two dozen regions across B.C., including Metro Vancouver, the Fraser Valley and most of Vancouver Island.

As much as 100 millimetres of rain is forecast for parts of the Island, causing a risk of flash flooding and water pooling on roads, Environment Canada says. The latest weather system should ease as the front passes late Thursday.