An Ottawa woman confined to hospital because of a care worker shortage is finally being allowed to go home, months after doctors first said she could.

Christine Benoit, 44, has multiple sclerosis and uses a motorized wheelchair. She’s been a patient at Saint-Vincent Hospital since having an operation for leg spasms in October 2017.

Nearly a year later, in August 2018, doctors told her she was healthy enough to be discharged, but the support she needed at home wasn’t available.

Before going into the hospital, Benoit required two personal support workers (PSWs), three times a day, to help her get out of bed, get dressed, make meals, and get back into bed each night.

However, changes made to her wheelchair in November cut that requirement down from two PSWs to just one.

Even that initially appeared to be too many. But over the holidays, the Champlain Local Health Integration Network (LHIN) — which oversees health care in the Ottawa area — called Benoit and said they’d found enough workers.

That meant Benoit would finally be going home.

Christine Benoit headed home from hospital on Thursday, approximately five months after doctors said she could be safely discharged. A shortage of home care workers had prevented her from leaving. 0:39

“I’m free!” she said Thursday afternoon, as she was getting ready to leave the hospital.

“I’m beyond over-the-moon ecstatic. I would rip off my clothes and go do the polar bear swim [if I could], just to match my energy.”

That excitement has been a long time coming. Just weeks ago, Benoit had considered filing a human rights complaint if she wasn’t released from the hospital this year.

Benoit said she’s still mulling the possibility of filing the complaint, but right now she plans to focus on enjoying being in her own apartment and bed.

She said she’ll be receiving help from one PSW three times a day: in the morning, at supper and in the evening.

In a statement, the Champlain LHIN blamed a province-wide shortage of PSWs for delays in getting people out of hospital and back home.

As of Thursday, there were currently 11 people still waiting in hospitals across the region because of a lack of PSWs to meet their needs, the LHIN wrote. Nine of those people had been waiting between three and 14 days.

“We deeply regret the problems this has created for clients and their caregivers,” the statement said. 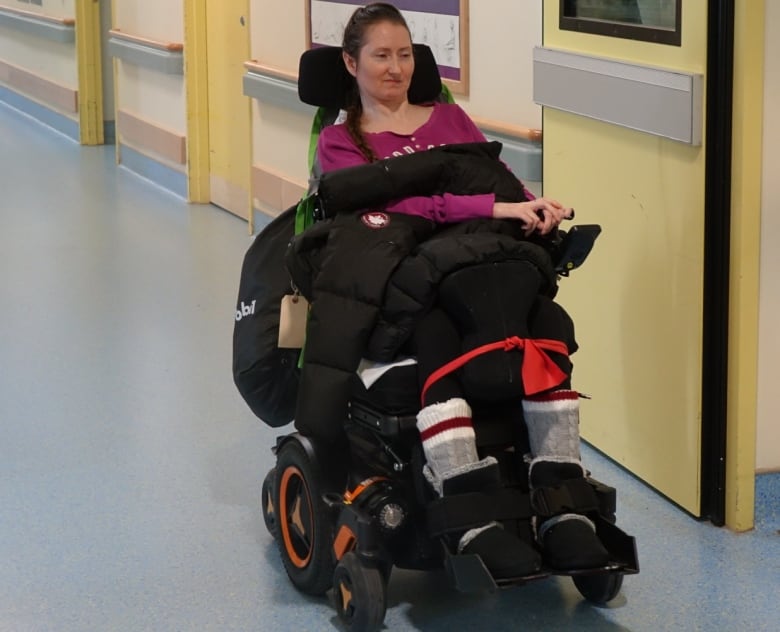 Benoit previously required two personal support workers to care for her in her home, but modifications made to her motorized wheelchair mean she now only needs one. (Kimberley Molina/CBC)

‘Be the squeaky wheel’

Benoit believes she wouldn’t be headed home if it wasn’t for the public pressure that came after CBC News first aired her story.

“I had to micromanage my entire exit, pretty much,” Benoit said, adding she doesn’t want people in similar situations to give up hope.

“Make sure that you’re on top of it, and don’t rely on anybody else. Keep strong and keep on them,” she said. “You’re not bothering them. Be the squeaky wheel.”