Earlier this week, the RCMP enforced a court-ordered injunction on a group of protestors in northwestern B.C. from the Wet’suwet’en Nation, who sought to prevent pipeline workers from accessing a road near the town of Houston. The Mounties dismantled the fortified checkpoint, known as the Gidimt’en camp, and arrested 14 people, sparking protests across the country and calls on Justin Trudeau to address the escalating situation.

Announced last fall by the provincial and federal governments, the $6.2 billion pipeline built by Coastal GasLink, a subsidiary of TransCanada Corp., would move natural gas across B.C.’s north to a coastal terminal in Kitimat. The path is about a kilometre south of a second checkpoint controlled by a clan of the Wet’suwet’en, known as the Unist’ot’en, who as of this writing expected the Mounties to arrive at their encampment at any moment.

The conflict has raised questions about the relationship between elected band councils and hereditary leaders when it comes to resource and development project. TransCanada has signed agreements with elected leaders of First Nations along the pipeline’s route, including those of the Wet’suwet’en. The Wet’suwet’en Nation, however, encompasses a vast region in northern B.C., and the hereditary leadership from all five of its clans, whose responsibilities extend beyond the borders of the reserve, say those contracts don’t apply to Wet’suwet’en traditional territory—in a province where most of the land was never ceded through treaty. It is the hereditary chiefs who are backing the ongoing protests.

Chief Robert Joseph is a hereditary chief of the Gwawaenuk First Nation on B.C.’s coast and an ambassador for Reconciliation Canada and the Indian Residential School Survivors Society, among other roles. He spoke to Maclean’s writer Kyle Edwards about the differences between traditional hereditary leadership and band councils elected under the Indian Act, and how tensions can arise between the two from things like, say, pipelines.

Q: What are the responsibilities of a hereditary leaders and elected band councils in a First Nation?

A: The situation you are finding in the Unist’ot’en in Wet’suwet’en territory is not uncommon. There are differences of opinion between elected leadership and hereditary leadership from time to time, and mostly when it comes to resource development that likely has impacts on the environment.

It’s during these times that hereditary chiefs assume their responsibility over the lands that are spoken about. In contrast, chiefs elected under the Indian Act are primarily responsible for things that happen on reserves—like infrastructure, housing, water, sewage, schools and those day-to-day matters that affect membership. Their jurisdiction doesn’t flow beyond the borders of the reserve that they’re on. That’s the situation with Unist’ot’en; they’re not on reserve—they’re on Wet’suwet’en territory in general.

Q: How does the hereditary leadership system work?

A: During pre-colonial times, tribes were governed by hereditary chiefs. And the genesis of the hereditary chief position flowed directly from all of the first ancestor stories. Through the years, this chieftainship was passed down through strict protocol, primarily in a father-to-son way, with exceptions of course. Where I come from, each tribe had four to six first ancestors, and therefore by extension, they would have four to six heads of those clans, or hereditary chiefs. Among them would be one senior chief determined by the long-standing narrative. The genesis stories actual mark or demark the territories that these clans came from. 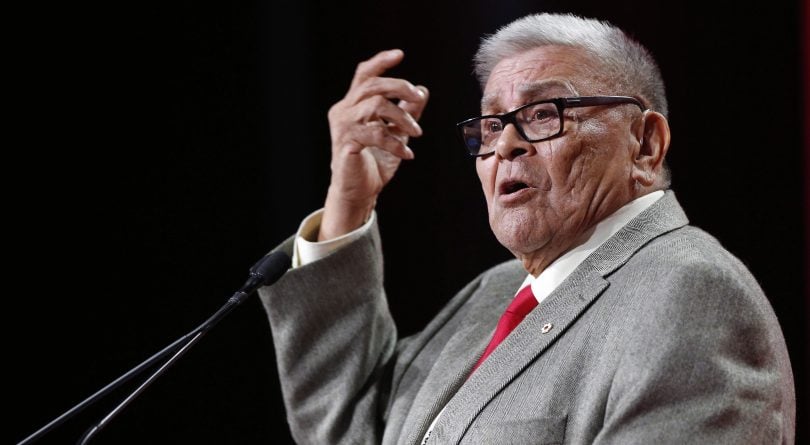 Q: As we’ve seen from the protests in Wet’suwet’en, hereditary leaders appear to still have a lot of influence.

A: The people throughout Turtle Island (North America) have never forgotten the old ways and traditions. They have practised them through rituals, songs and dances. In their minds, in their hearts, it’s real. They’re the chiefs of those territories.

Q: These days, what is the responsibility of a hereditary chief in a community?

A: At the moment, they don’t have any authority that’s recognized. Part of the problem is that the elected chiefs in Wet’suwet’en approved of the pipeline. As a hereditary chief, our responsibility is primarily to encourage our members to hold on to their traditional belief systems and the perspectives that we have about land. We have a very strong moral persuasion in all of this that needs to be added into the discussion around development.

Q: How many hereditary chiefs are there in B.C.?

A: Many more than the elected ones. We have about 200 tribes in B.C. and each tribe has between four to six hereditary chiefs, but they’re not all active. A lot of these chieftainships were never resurrected after the colonial weight of oppression. Right now, there’s probably as many as the elected or more.

Q: So why do some First Nations have two different forms of leadership?

A: Under s.74 of the Indian Act, the Department of Indian Affairs imposed the election process on all First Nations and did away with the Indigenous hereditary system. The government is living with its own creation, and that’s the destruction of traditional forms of government and imposing the elected system.

Q: When it comes to things like pipelines, which side—elected band council or hereditary leadership—would have the final say in deciding whether it’s approved or not?

A: Essentially, unless there’s an internal agreement in a First Nation between the elected personnel and the hereditary personnel, traditional leadership has no say at all. They have no power to exercise any of their obligations. They have to work hard at trying to persuade the elected chief and council that it’s in the interest of the entire band that the two bodies work together.

Q: I imagine that creates tension.

A: It always causes friction. And sometimes the outside parties like the federal government or big corporations and other entities know this, and can use that as a tool to create the kind of divisions that fracture relationships.

Q: Do you think part of the problem in northern B.C. is this system of government that was, as you say, forced on First Nations?

A: Absolutely. It’s going to create conflict down the road. I think that the federal government, having imposed these systems, really destroyed our sense of being a self-governing people. Our people want to be self-governing, and it can be under whatever dominion or authority, but they’re allowed to have the local self-governance that’s most appropriate to them. The system of having two levels of government in the equation is challenging and complicated.