An investigation by Quebec’s labour standards board has concluded the Church of Scientology of Quebec owes 62 employees of the Quebec City branch more than $750,000 in unpaid wages and vacation pay.

The board, known by its French acronym CNESST, has filed documents in Quebec Superior Court, asking the court to order the organization to pay the wages owed, plus interest and indemnities, for a total of more than $900,000.

Pay stubs obtained by Radio-Canada showed that in December 2017, one worker was paid less than $2 an hour — just under $70 for 39 hours of work. 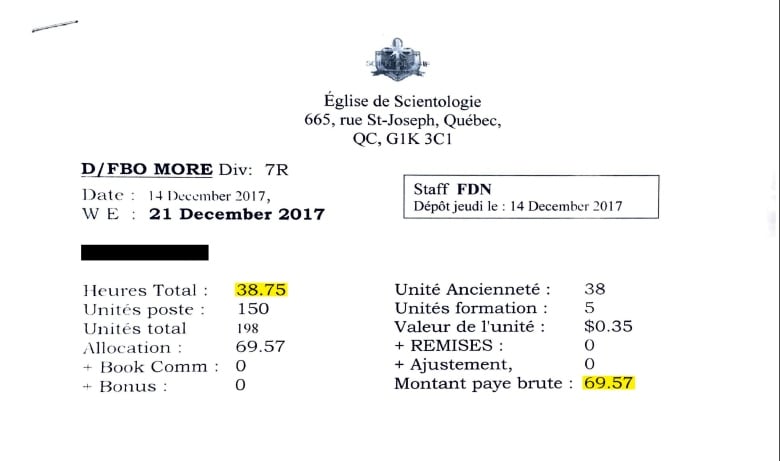 In this pay stub, obtained by Radio-Canada, a staff member of the Church of Scientology of Quebec appears to have been paid just under $70 for nearly 40 hours of work. (Radio-Canada)

“They voluntarily contribute to the activities of the church and its humanitarian goals. They don’t work for monetary gain, but to help others,” Michelle Lacombe, the group’s director of public affairs for Quebec, told Enquête last year.

Someone can’t be a “semi-volunteer,” Gesualdi-Fecteau told Enquête. “You’re salaried or a volunteer.”

The court documents filed on Jan. 4 suggest the CNESST has reached the same conclusion.

“[The CNESST] can, on behalf of employees, claim from their employer sums due to them by virtue of the Labour Standards Act,” the document reads.

According to the documents, the labour standards board has already sent a legal letter to the Church of Scientology of Quebec, seeking a total of $986,638.61 in unpaid wages, plus interest.

“The defending party refuses or fails to pay the sums due,” the document states.

The court filing is the first step towards a civil suit against the organization.

The Church of Scientology of Quebec has not yet responded to a request for comment from Radio-Canada.