After three days of talks with the RCMP, the Wet’suwet’en hereditary chiefs say an agreement has been reached over the enforcement of an interim injunction order to allow pipeline workers into the nation’s traditional territory.

Hereditary​ chiefs met Thursday in Smithers, B.C., with the RCMP and representatives from Coastal GasLink.

They have agreed to allow the company access to do pre-construction work as specified in the interim injunction order for the time being, following arrests on Monday.

“We are adamantly opposed to this proposed project and that will never change, but we are here to ensure the safety of our people,” said Chief Na’Moks who attended Thursday’s meeting.

Coastal GasLink president Rick Gateman spoke briefly to reporters after the meeting, describing the talks as productive and respectful.

“As a result of these discussions, we have worked out many of the details that are required for us to have free access to the bridge and beyond,” he said.

The Coastal GasLink project is run by TransCanada Corp., now officially known as TC Energy, and is meant to move natural gas from northeastern B.C. to the coast, where a liquefied natural gas project is scheduled for construction.

Wet’suwet’en members had set up checkpoints on a remote stretch of forest service road and a bridge preventing people working on the project from accessing their traditional territory, which sits about 300 kilometres west of Prince George, B.C. 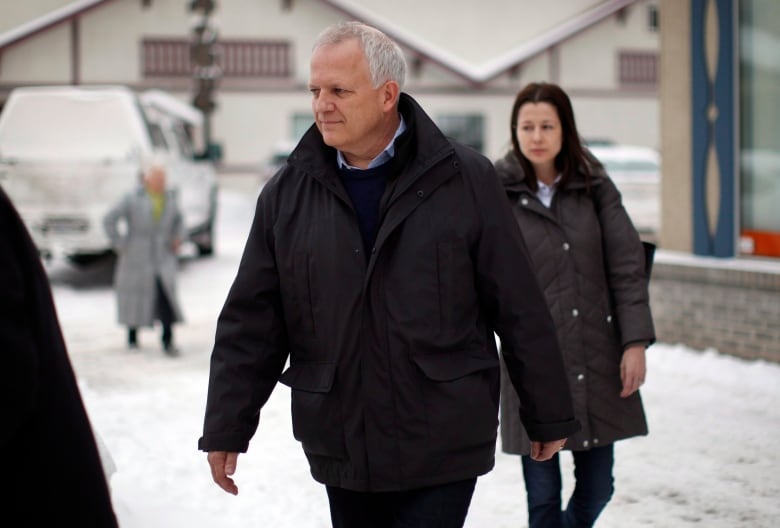 President of Coastal GasLink pipeline Rick Gateman leaves the office of the Wet’suwet’en after meeting with RCMP members and hereditary chiefs to discuss ways of ending the pipeline impasse on Wet’suwet’en in Smithers, B.C., on Thursday. (Chad Hipolito/Canadian Press)

On Monday, RCMP officers moved in on one checkpoint to enforce the injunction.

Fourteen people were arrested and the chiefs said they’re concerned about community members who were there, saying it was a traumatic experience. “That will never happen to our people again,” Na’Moks said of Monday’s enforcement actions at the Gidimt’en checkpoint.

Thursday’s meetings were aimed at ironing out concerns raised Wednesday evening regarding some of the conditions  the chiefs wanted met in order to allow Coastal GasLink workers and contractors into the area.

For example, they wanted to know if the RCMP will allow the people at the Unist’ot’en camp to keep the gate up at the entrance to their camp.

After talks wrapped on Thursday, hereditary​ chiefs said Coastal GasLink will be allowed “soft access” through the territory for the time being. The company will be permitted to remove obstructions on a bridge where the checkpoint is still in place. Chiefs said one metal gate will remain in place.

The chiefs have said Thursday’s deal doesn’t mean they’re consenting to the Coastal GasLink pipeline being built through their traditional territory. “This is not consultation or accommodation in any sense,” said Na’Moks.

Coastal GasLink applied for an injunction at the B.C. Supreme Court in November, stating people at the Unist’ot’en camp were preventing their workers from gaining access through the forest service road. Coastal GasLink requested an interim injunction while the matter was working through the courts so pre-construction work could begin.

With that interim injunction granted, the RCMP has been tasked with ensuring access is granted as stated by the courts.

“Despite opposition Coastal GasLink is currently facing, LNG Canada has every intention to continue to advance our project and maintain our construction schedule to deliver jobs and economic benefits to First Nations, local residents and British Columbians,” CEO Andy Calitz said.

“Projects like our own provide an opportunity that many First Nations and northern communities have not had before and may not see again.”