Winnipeg police say at least one officer fired a gun while trying to stop a vehicle that was ramming cruisers before it sped away on Wednesday night.

Two men and a woman were later arrested, including one man who was suffering from a gunshot wound, said police spokesman Const. Rob Carver.

He could not say, however, if that man was the driver of the car or if his injury was from an officer’s gun.

Carver would also not say how many officers fired their weapons and if they were shot at. The incident is now being examined by the Independent Investigation Unit of Manitoba, which looks into all serious police-related matters.

The shooting was part of a series of incidents that started in the East Kildonan area of the city and ended in St. Boniface. Police were called around 8:30 p.m. to McLeod Avenue and Raleigh Street about an assault with a weapon.

When they arrived, a car sped away and police gave chase. But they abandoned the pursuit soon after due to the reckless manner and speed of the car they were following.

Other police units were called in and flooded the area, eventually finding the suspect car at the intersection of Nairn Avenue and Panet Road in East Elmwood. 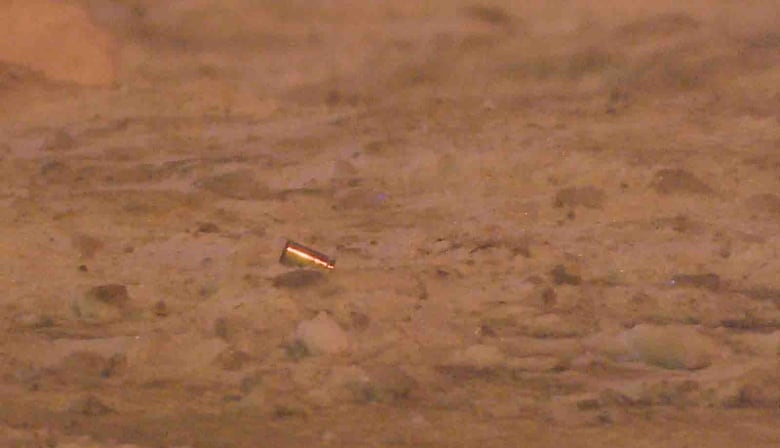 A bullet casing can be seen in the snow near Nairn and Panet on Wednesday night. (Tyson Koschik/CBC)

Police vehicles tried to block it in but the vehicle rammed its way through, Carver said. That’s when police shot at the vehicle, which raced away, heading south on Panet toward the St. Boniface Industrial area.

A stream of police vehicles gave chase, according to witnesses who spoke to CBC News.

About three kilometres away, at Marion Street and Archibald Street, the vehicle being chased pulled off the road and started driving along railway tracks, where police were able to catch up and arrest the three people.

One of them, a 23-year-old man, was injured from a gunshot. He was treated and released from hospital but it is not clear who shot him, Carver said. 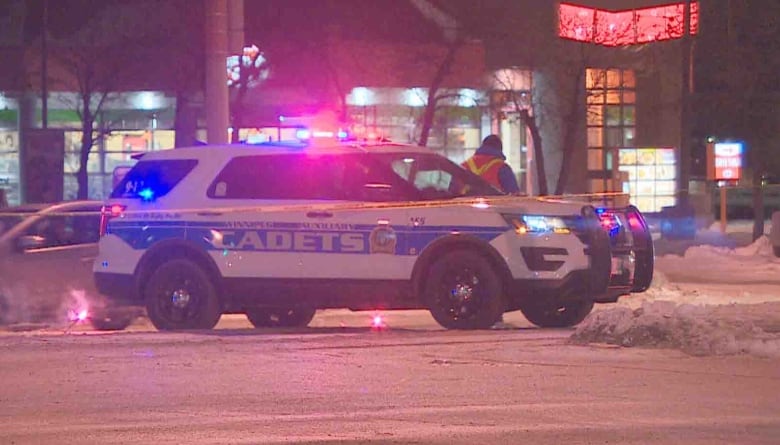 He also does not know about charges against the other two adults and said “it’s very likely we will not be releasing those details now that this has moved to the IIU’s area.”

During the arrest, a police supervisor was also injured by a moving train. He was treated at hospital and released.

Yellow tape surrounded the intersection of Nairn and Panet from around 9 p.m. CT Wednesday until just before 6:30 a.m. on Thursday. At least one bullet casing could be seen on the ground in the area.

As well, the intersection of Archibald and Marion was also blocked. In all, more than a dozen police vehicles were at the two scenes.

Anyone with any information or video footage of the incident is asked to contact the IIU toll free at 1-844-667-6060.

Winnipeg police say at least one officer fired a gun while trying to stop a vehicle that was ramming cruisers before it sped away on Wednesday night. 1:51