Air traffic controllers from Atlantic Canada directed a fleet of special arrivals into the New York Air Traffic Control Centre on Friday night, as a gesture of solidarity and respect.

And each was covered in a layer of gooey melted cheese.

The Canadian Air Traffic Controller Association units in Gander, N.L., and Moncton, N.B., ordered pizzas for all of their colleagues at the control centre in New York, who have been working without pay since the partial U.S. government shutdown began on Dec. 22.

U.S. President Donald Trump wants $5.7 billion to build a border wall with Mexico, and says he won’t put through a bill to cover the cost of operating parts of the government until he gets it. The Democrats have put forward a funding bill, but don’t support the wall.

“It’s been so overwhelmingly negative and it’s nice to see that there’s solidarity out there. There’s people out there who are just saying, ‘Hey, I work with you as a friend or a colleague and here’s a nice gesture of friendship, that we care,'” said David Lombardo, a former air traffic controller who lives in Long Island and runs a social media site for people in the industry.

He posted a notice to Reddit ​about the impending pizza arrival seen in the hallways of the New York control centre.

“Aviation is a really tight-knit group of people, it’s like a family. And plus, it goes against the whole rhetoric here that we’re talking about because it’s an international boundary!” 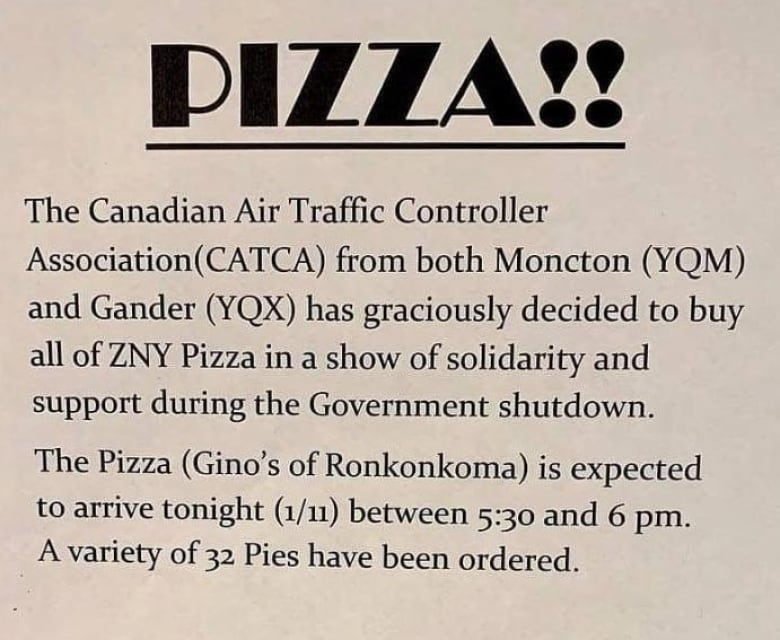 Sometimes solidarity comes with a soft crust and a layer of melted cheese. (Dave Lombardo/Reddit)

Air traffic controllers provide essential services and are unable to suspend work or take any other job action during the government shutdown, he said. As a result, with no other government services running, they’re working without paycheques.

“They’re worried about their mortgages, their medical bills. It’s one thing to have a date set and say, ‘Hey you’re going to get your back pay in a week or two,’ but they have absolutely no idea when they’re going to get paid, And you can imagine that’s pretty disheartening and pretty scary for many people.”

The pizza-delivering task force from the Gander and Moncton crews is part of a national effort on behalf of Canadian air traffic controllers to show support for their American counterparts, said Peter Duffey, president of the Canadian Air Traffic Control Association (CATCA).

Duffey said local unions have been asking the national union what they could do to help since the U.S. government shutdown began. On Thursday evening, controllers in Edmonton had the idea to send pizzas across the border to controllers in Alaska.

It snowballed from there. As of Sunday morning, Canadian units have sent pizzas to 35 different units in the U.S.

“This is as grassroots as it gets, with our members just jumping on board this like crazy,” he said. “I couldn’t be more proud of what my members are doing.”

‘We’re all taking care of the skies over North America’

Duffey echoed Lombardo’s sentiment that air traffic controllers keep each other close, even though they don’t work side-by-side and often only hear each other’s voices in headsets.

“We always stand together, especially with our American counterparts,” he said. “Our members just want to reach out to those people that they consider to be co-workers. We’re all taking care of the skies over North America.” 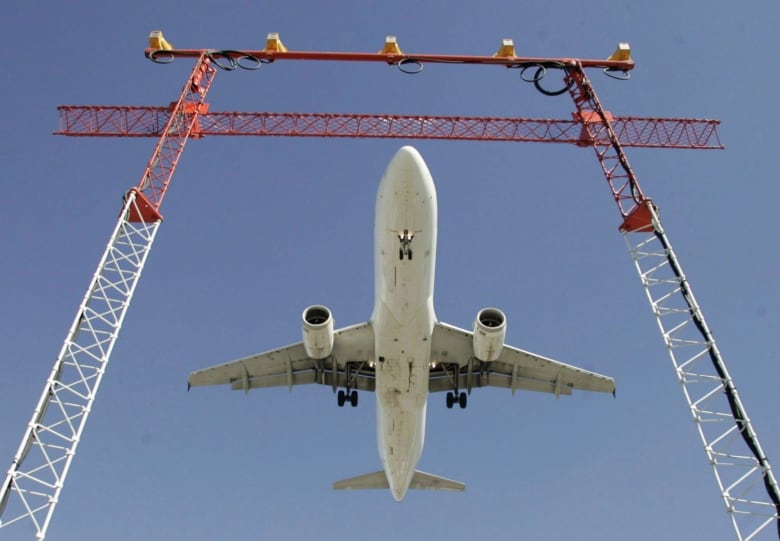 Canadian air traffic controllers have been sending pizzas to control towers and centres in the U.S. to show solidarity with their American colleagues, who are working for free. (Adrian Wyld/Canadian Press)

The nature of the job also builds a strong bond, he said.

“We always say that we have to be 100 per cent correct, 100 per cent of the time, with zero room for error. That’s the nature of our job. To have somebody have to report to work with the added pressure of knowing they’re now into their second period of work with no paycheque, they don’t need that kind of added stress and pressure. We just want to send them a message that says, ‘Hey we’re with you, we stand with you, and we’re sorry that this is happening to you.'”