Most car enthusiasts park their sports cars for the winter to avoid the ice, salt and debris. Edmonton’s Oren Zamir is an exception — he thinks winter is the best season to drive his Lamborghini.

“I’ve spent my best money, I’ve worked so hard for it, who cares if I’m going to get a scratch or something because of winter? I’m going to enjoy it day in and day out,” Zamir said.

Although he owns several other luxury cars including a BMW i8, Zamir has been dreaming of owning a Lamborghini since he was a child in Israel. The one he owns is a Lamborghini Huracán LP 610-4 LB, matte black with blue accents.

“I’m a big Transformers fan and I feel like a Lamborghini looks like a transformer: the sharper turns, the cuts. It’s very aggressive and I love it.”

Watch: Oren Zamir take his Lamborghini for a spin on a cold January day.

Oren Zamir drives his Lamborghini Huracán all year round. 1:12​

Zamir notes that he didn’t grow up with a wealthy family. He’s worked to buy the cars he’s passionate about. He’s the regional manager for Fluent Home, a business that sells home security systems.

He initially set a goal to make enough sales in 2017 to buy the Lamborghini. Zamir didn’t make his goal that year, so in 2018 he decided to go back to door-to-door sales alongside his employees, to motivate them. When mid-summer came around, he’d hit the number of sales he needed to buy the car.

Zamir bought the luxury machine in August 2018 from Lamborghini Vancouver. He noted it’s a used vehicle, with 29,000 kilometres on it when he became its owner. Lamborghini Huracáns go for $300,000 or more brand new, depending on how they are equipped.

By the time he’s done modifying his car, Zamir will have spent more than $300,000, including modifications.

“I am going to make this a real beast,” Zamir said. “I’m going to supercharge it and I am going to change a few body pieces to make it more unique.” 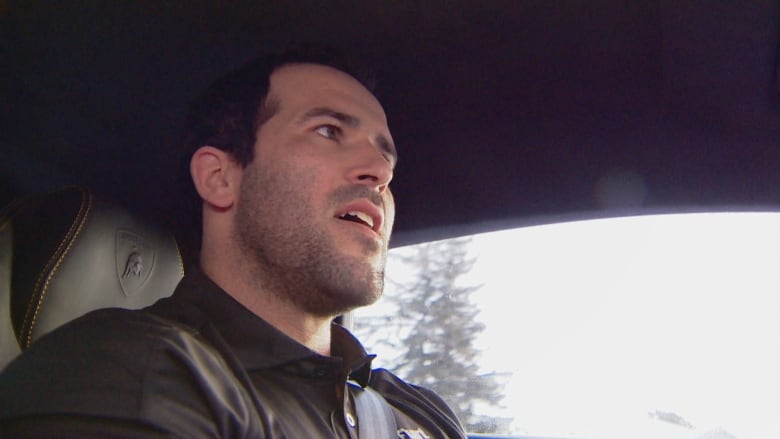 Alejandro Santizo is the owner of Velocity Motorsport, which services luxury exotic vehicles in Edmonton. He said these luxury cars are built to be driven year-round, even in winter conditions.

“They have an all-wheel [drive] system, traction control, they have amazing brakes and they’re light, therefore they stop faster,” Santizo said.

There’s even a button in the car that can be pushed to lift it one or two inches higher off the ground to provide some clearance so it doesn’t get stuck in the snow.

Most people will add paint or windshield protectant to their sports cars to protect them from gravel and salt, Santizo said.

With 610 horsepower, the Huracán is known for its speed. Zamir wouldn’t share how fast he’s gone, but the Huracán can reach speeds of more than 300 kilometres per hour.

“It’s not necessarily about … the high speeds as much as I’m getting to the speed so much faster than anyone else. That’s the adrenalin rush that kicks in.”

Zamir particularly loves seeing the effect the Huracán has on onlookers. For the most part it’s younger people who ogle the car but Zamir said an older couple pulled up next to him recently to take a look.

“You have car fanatics at all ages, you know, and I respect that,” Zamir said. “Put a smile on people’s faces in the middle of the winter. I love it.”

Zamir has no plans to stop doing doughnuts in his Lamborghini, despite damaging the front after driving it into a snowbank. That’s mainly an issue if he wanted to sell it — and Zamir said he plans to keep it forever.

The Byward Market Starbucks is closing permanently at the end of January.

“It is with heavy hearts that we must announce the permanent closure of our store on January 31,” the coffee shop said in an Instagram post.

“Due to the changes in the economic climate since the start of the pandemic, Starbucks Canada has made some difficult decisions to close certain stores across the country whose business have been most effected by COVID-19. Unfortunately, our store fell into that category.”

Starbucks is to close up to 300 locations by the end of March, the chain announced earlier this month, accelerating its “transformation strategy” in response to changing consumer habits during the pandemic.

The chain expects to complete theplanned store closures by the end of its second quarter. The restructuring includes adding new drive-thru locations, expanding delivery and a pilot of curbside pick up-only locations.

OTTAWA — Canadian wholesale sales grew for the seventh consecutive month in November to hit a record high, while manufacturing sales fell for the month.

CIBC senior economist Royce Mendes said factory sales took a breather in November, but he added that the decline seemed to have been narrowly driven by a few categories, noting that only five of 21 industries saw lower sales for the month.

“Declines were most prevalent in the auto and aerospace sectors,” Mendes wrote in a brief report.

“Lower prices for lumber and wood products also pulled down sales of wood products, which have been benefiting recently from strong demand for building.”

The data provided a snapshot of the economy for November, however the increased restrictions to slow the spread of the pandemic in some provinces since then are expected to have taken a deeper toll on the economy.

“Although manufacturing was deemed essential by all provinces, the sector will face headwinds from the drop in domestic demand seen elsewhere in the economy.”

The transportation equipment industry fell 9.1 per cent to $8.9 billion in November, while aerospace production fell 23.8 per cent to $1.2 billion and motor vehicle sales slipped 5.7 per cent to $4.3 billion.

Wood product manufacturing sales fell 4.1 per cent to $3.3 billion in November on lower sales in the sawmills and wood preservation industry.

Wholesale trade in volume terms rose 0.9 per cent in November.

The data for November came ahead of the Bank of Canada’s interest rate decision and monetary policy report on Wednesday.

The central bank is widely expected to keep its key interest on hold at 0.25 per cent.

But the federal agency’s unofficial early estimate for December appeared to dampen the retail momentum.

It said sales for the last month of 2020 – typically the peak of the holiday shopping season – potentially fell by as much as 2.6 per cent.

Retail expert Farla Efros said it’s not surprising the sales would taper off in December given the heavy discounting offered on Black Friday in November, as well as Amazon’s decision to move its Prime Day to mid-October.

“Most people took the opportunity to do their shopping early and get those deals,” said Efros, president of HRC Retail Advisory.

In addition, Toronto and the Peel region went into lockdown in late November, followed by the entire province of Ontario on Boxing Day.

Retail e-commerce sales for November were up 75.9 per cent from the same month a year earlier, the agency said.

“The rise in sales coincided with retailers urging online shoppers to buy early to avoid shipping delays, as well as promotional events such as Black Friday,” Statistics Canada said in its release.

Royce Mendes, senior economist at CIBC Capital Markets, said in a client note that the growth in e-commerce sales was likely led by households staying at home more as COVID-19 cases were rising.

He said numbers don’t include “some of the largest online retailers, which the survey doesn’t capture.”

Food and beverage store sales were up 5.9 per cent in November, even as about three per cent of all retailers were closed at some point in the month as restrictions tightened amid a resurgence in COVID-19 cases.

Efros pointed out that restaurants in some areas were forced to close in November, likely leading to the  increase in retail food sales at grocery stores.

She said food price inflation may have also pushed the sales figures higher as well.

Meanwhile, sales at auto parts dealers fell in November for the first time since April, as truck sales declined four per cent from November 2019, and passenger car sales tumbled 20.5 per cent compared with the same month last year.

No sledding allowed: Ottawa to clamp down on Mooney’s Bay hill crowds