Michael Hanlon admits he was just floating by in life until he found new purpose in a group that’s brought together music and friends who have been joined in commonality.

Every Thursday night, the sounds of strumming, drumming and the occasional accordion can be heard throughout the halls of Keyin College in St. John’s. It’s where a dozen or so members of Music Healing Veterans gathers each week.

“Our students generally have developed either psychological, physical — or both — challenges as a result of their duties,” Hanlon said.

“We are providing this music instruction as way for people to channel themselves better and achieve calm where they probably haven’t been successful before, and give them something to focus on, on a daily basis.” 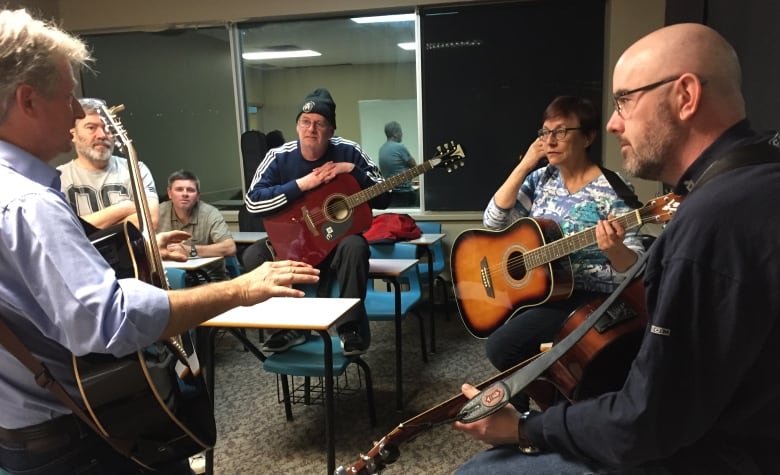 Hanlon himself can attest to how the program works.

He spent 13 and a half years in the Canadian infantry, after which he left on a medical release for post-traumatic stress disorder.

“With my graphic design and web skills, I thought I would be able to support myself that way but it turned out I was a lot sicker in those days than I realized,” Hanlon said.

“I ended up going the disability route and have been free-floating for a good few years now until I found this program and a focus for my day. I love seeing the smiles on the students.”

‘No drama, no trauma’

Music Healing Veterans Canada has several chapters across the country, all of which are run by veteran and civilian volunteers. The goal is to bring free music instruction to veterans, first responders, correctional officers and members of Canada Border Services.

Melissa Fitzgerald, a volunteer civilian co-ordinator who helped start the St. John’s chapter, is amazed by the amount of progress the group has had since its first meeting Sept. 13.

“The best part about this group is everybody’s so understanding and no one interrogates you,” Fitzgerald said in an interview between intermediate guitar lessons.

“You walk in and you say I’m having a bad day … they nod and they’re there, and they don’t they don’t question it.”

Instructors give up their time to teach basic and intermediate guitar, accordion and bodhrá​n, an Irish drum. 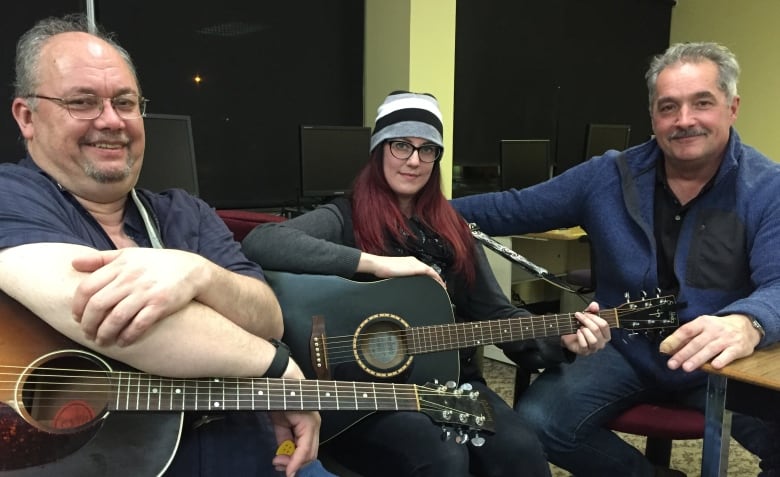 For musician Hugh Scott, the group has become more than a weekly teaching activity but rather a chance to be with new friends.

“I had a brief career in the military myself and I understood the the way this program was working so I had no absolutely no problems coming in here,” Scott said.

“It’s been very, very self-fulfilling, actually, working with these people because I consider them friends now and we’ve actually started writing songs together and everything.”

I might be having a bad day pick up the guitar and just practise one chord over and over … next thing you know it was like I took medication or something.– Hugh Scott

Music provides an outlet for healing without having to sit in a circle and talk about trauma, Hanlon said.

“But if you need to talk you can step outside and have your chat and there’s just no judgment at all.

“No drama, no trauma — just good music good company, and that’s our mantra.” 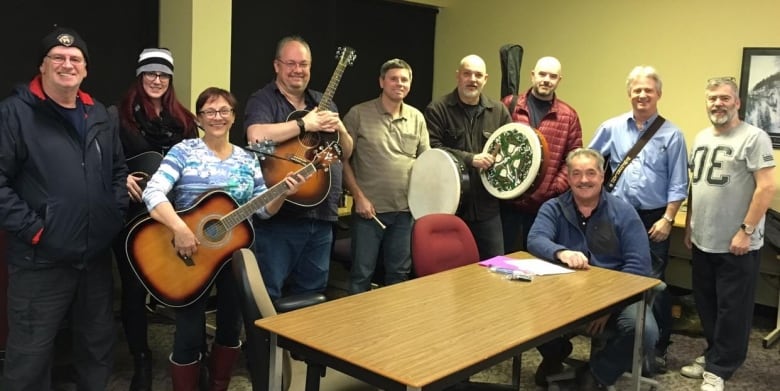 If someone wants to get something off their mind, Hanlon said, they now have a new group of friends to lean on. But during lessons, it’s all about the music.

“Medically, they say, playing guitar engages so much of your brain and your body that you rarely have time to think depressing thoughts because there’s so much concentration involved,” he said.

“It is true … I’ve proved to myself. I might be having a bad day, pick up the guitar and just practise one chord over and over … next thing you know it was like I took medication or something. It’s amazing.”

How The Ottawa Hospital’s ‘Code Orange’ worked to save lives