“It’s just my insurance policy in case everything goes wrong,” she said in her home in suburban London.

Elgarf has been buying extra groceries since last June, fearing Britain will leave the European Union in a disorderly fashion, without a divorce deal.

“I think we may have shortages,” she said. “Every time I feel a bit stressed, I’ll add something extra.”

She’s part of a Facebook group called “48% Preppers,” referring to the proportion of Britons who voted to remain in the EU in the 2016 referendum. The group has more than 3,400 members and says it’s not open exclusively to EU supporters.

Its description states “we make the assumption that Brexit will be bad, possibly even disastrous for the U.K.”

British MPs are widely expected to reject Prime Minister Theresa May’s EU departure agreement in a vote on Tuesday. A defeat would increase the odds of Britain crashing out with no deal, raising the spectre of customs checks, import delays and tariffs imposed as early as March 29.

Britain imports about half of its food, so potential delays at the border are leading some residents and companies to expect shortages. A growing number of them are stockpiling goods and medication as a precaution, and the government is taking steps to prevent supplies from running out.

A mother of three, Elgarf especially worries about her four-year-old daughter Nora, who has cerebral palsy. Nora takes medication produced in Belgium and France. The drugs are so tightly controlled in Britain that the family can’t stock up, Elgarf said.

“I’m sitting here thinking, ‘Will I be able to get medicines in two months’ time?’ ” Elgarf wondered, pointing out she lives in the world’s fifth-largest economy. “It’s a completely crazy situation.” 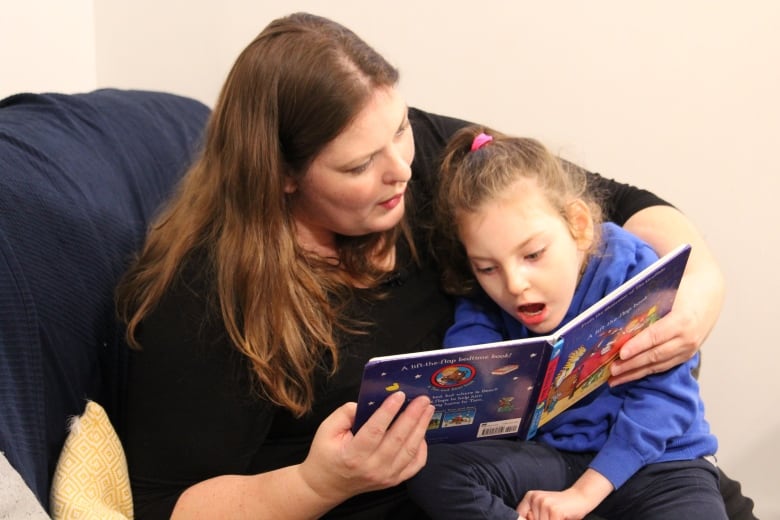 In the event of a no-deal Brexit, Jo Elgarf worries about potential import delays affecting medication needed for her daughter Nora, 4. (Stephanie Jenzer/CBC)

Seventy-three per cent of Britain’s imported pharmaceuticals come from the EU. England’s National Health Service, however, can’t guarantee the flow across the English Channel will continue unhindered in the event of a no-deal Brexit.

“In the short term, there could be delays in importing medicines due to new border arrangements,” the organization warned.

Last year, the British government asked drugmakers to stockpile an additional six weeks’ worth of products in case of Brexit-induced supply disruptions.

Other industries, too, are ramping up stock. Supermarket chains have announced plans to increase non-perishable food reserves. And one of the world’s largest food makers, Nestle, said it had boosted supplies in Britain.

The management at Italian eatery Buongiorno e Buonasera in London’s West End is even stockpiling pizza ingredients. The establishment offers an authentic experience by employing Italian staff and importing Italian ingredients for its four locations in England. 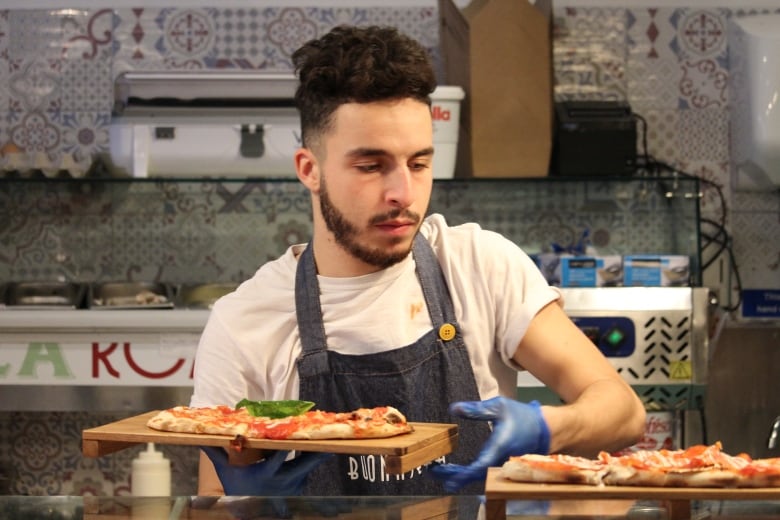 But general manager Raffaella Baruzzo fears Brexit could undermine its business model altogether. She says 30 per cent of staff have left for Italy since November.

“We have to get organized in terms of the worst, not knowing what the worst is,” Baruzzo said.

Industries have ramped up stockpiling to the point where Britain is running out of warehouse space, particularly for chilled and frozen goods.

Pallets of foreign yogurts, Parmesan cheese, sausages and other products line the shelves at Oakland International’s 8,550-square-metre, temperature-controlled depot in Corby, east of Birmingham. The food is destined for supermarkets across Britain and Ireland. 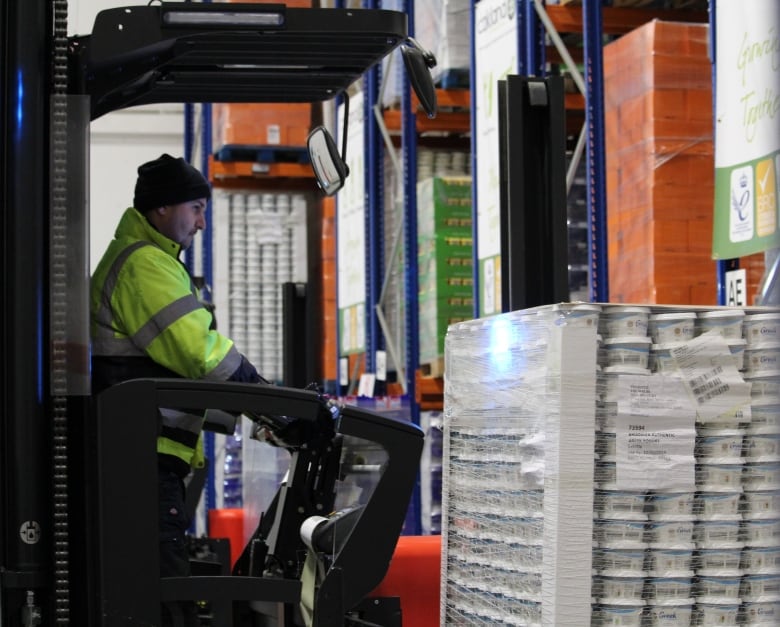 Oakland International does not intend to start stockpiling extra food at its Corby depot until mid-March, two weeks before Britain leaves the EU. (Stephanie Jenzer/CBC)

The storage and logistics company isn’t stockpiling yet, but does plan to squeeze in more products by mid-March.

“We’re saying, if you can, stock an additional two weeks of stock, but ‘piling’ is maybe a bit sensational,” commercial director Robert Hardy said.

The Corby depot is undergoing of a £2.8-million ($4.7-million Cdn) expansion. Oakland International had already planned to build a larger space for frozen products but “because of the inquiries we received — because of Brexit — that plan became basically quadrupled,” Hardy told CBC News.

Other businesses, too, are banking on Brexit as a money-maker.

From his home workspace on the outskirts of Leeds, James Blake assembles and sells “Brexit boxes.” The kits are filled with supplies more often needed in natural disaster situations, but his website describes the product as “Brexit stockpiling made easy.” 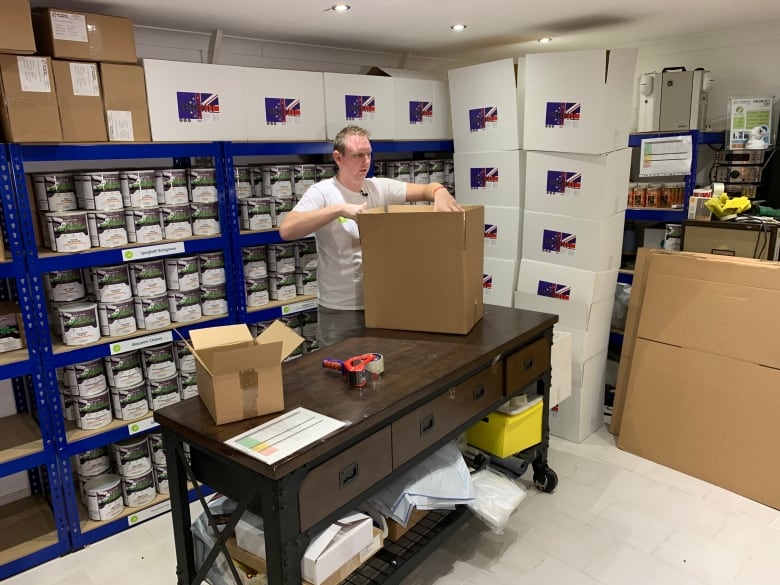 James Blake packs and sells emergency food kits. He created a Brexit box with cans of freeze-dried meals and other supplies. (Thomas Daigle/CBC)

Each box includes a water filter, fire starter and cans of freeze-dried food, such as sweet and sour chicken and macaroni and cheese.

“People are buying the Brexit box because they’re wanting to be prepared just in case there’s an emergency scenario,” Blake said.

“Nobody knows what’s going to happen yet,” Blake said.

The food in the box is intended to have a shelf life of up to 25 years, in case Brexit doesn’t turn out to be the disaster that some fear.

With files from Reuters