While residential garages are generally home to cars, trucks and household junk, one Edmonton area couple has turned theirs into a fully-functional arcade.

Mathew Russell and his wife Shawna Russell Spady are the proprietors of Short Circuit Arcade in Strathcona County, which they recently began renting out for parties and special events.

Complete with a carpet that glows under a black light and a dance floor, the gaming space was custom built as an extension of their house, after Russell’s private collection outgrew their basement.

‘A game for everybody’

Each coin-operated game has been lovingly restored by Russell during his spare time from his day job as an electrical engineer. A few dozen more games are in storage, waiting to be refurbished.

Once inside, Russell hopes his customers get acquainted with some old friends and foes like Donkey Kong, the Teenage Mutant Ninja Turtles, Pac-Man or Popeye. 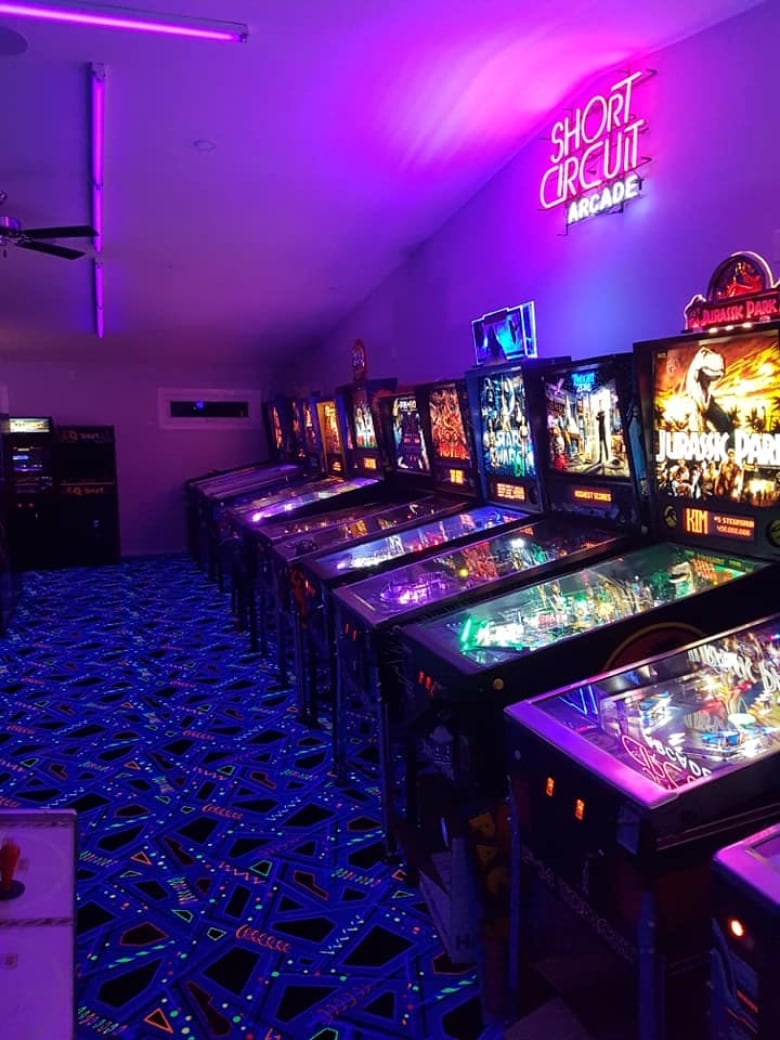 “There are 86 vintage games in here. There will be around 120 when we’re complete, so there will be a game for anybody,” Russell said in an interview with Edmonton AM.

It all started with a single game Russell spotted for sale on Kijiji a few years ago — a Japanese-made, joystick-operated classic which allows players to defeat hordes of evil people.

“It was Ninja Gaiden and I was like, ‘Oh. I remember this game.’ As a kid, I put a lot of quarters into it and I could never finish it.”

Russell happily shelled out $100, and after a few beeps and boop noises from the old machine, he was hooked.

“From there, I kept looking and I realized there’s more and more for sale,” Russell said.

“They’re not as cheap anymore. They’re getting more popular so the prices are going up.”

Russell grew up racing cars and defeating villains on the machines. He started playing as a kid growing up in Olds.

Whenever his family went bowling, he would rush over to the attached arcade to spend his change.

A passion for vintage video games inspired Mathew Russell and Shawna Russell Spady to build an arcade inside their garage. 1:14

“My mom would give me four quarters and I would run over and play some games. I wasn’t very good at it but it was awesome.”

Big plans for a ‘great space’

An arcade called Short Circuit was his favourite hangout in high school. He was sad when the old place shut down and wanted to play homage to it with his new business.

“We would go there every lunch hour and after school, as much as we could and just hang out, play some games if we had money or eat some french fries and gravy,” he said.

Constructing the gaming space came with its challenges. County officials thought Russell’s vision for a home-based arcade was too large for his standard residential lot.

He redesigned the blueprints until the extension was just big enough to get a permit.

“We just kept having to appease them and we ended up with the space we have now which is 2,300 square feet,” he said.

I married into this and now l love playing.– Shawna Russell Spady

For her part, Russell Spady didn’t grow up playing in the arcade. There wasn’t one in her hometown of Lamont, but she has grown to love them and gained a competitive streak.

“I grew up playing Nintendo when my brother made enough money to buy one but I married into this and now l love playing the games,” she said.

She said Donkey Kong Junior from 1982 is her favourite because she can always win.

“It’s the only game I can beat him consistently on. Otherwise he beats me very, very much, by a lot,” she said.

“It’s a wonderful Friday night date to come out here and play.” 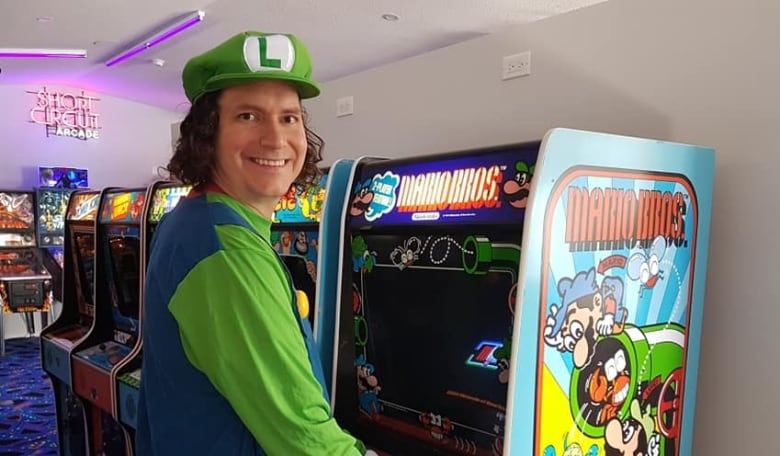 Mathew Russell all dressed up to play some Mario Brothers. (Short Circuit)