Ontario and federal politicians have walked away empty-handed from meetings with General Motors about the company’s plans to close the Oshawa Assembly Plant.

Both politicians said they urged the company to reconsider its decision to shutter the plant at the end of this year and are disappointed GM refused to budge on the closure.

“I had a very candid conversation with Mary and the senior executive team at GM,” Bains told The Canadian Press on Tuesday in an interview.

“I also articulated that GM is making a mistake by leaving Oshawa.”

He told Barra and other senior GM executives that Ottawa is prepared to be part of any solution related to the Oshawa facility. 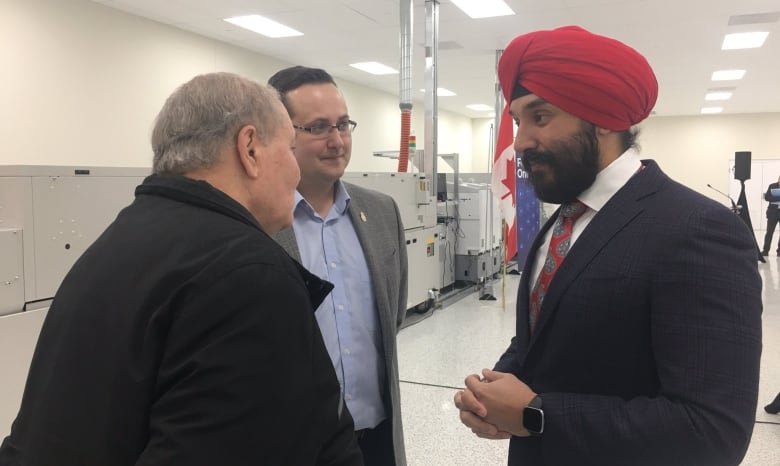 Barra, he said, indicated GM will continue to support its assembly operation in Ingersoll and its engine and transmission factory in St. Catharines. She also insisted the company will continue to make investments in its Markham research and development facility, he said.

Bains, who met with Chrysler CEO Michael Manley on Tuesday, said automakers are optimistic about Canada’s role as a place to build cars of the future, including zero-emissions and automated vehicles.

“Obviously, we regret the decision that GM has taken vis-a-vis Oshawa — but they’re an outlier,” said Bains, who added that Manley reaffirmed his commitment to Chrysler’s Brampton and Windsor assembly plants in Ontario.

In a statement, Ford said he promised to press GM executives to extend the company’s operations at its Oshawa plant to give workers more time to prepare for the consequences of the closure.

“Despite raising this on repeated instances, I was disappointed to hear that General Motors’ position has not changed,” Ford’s statement said.

Union leader Jerry Dias, president of Unifor, has criticized Ford for not fighting for Oshawa workers after the premier initially said little could be done to change the minds of GM executives. Ford met with Dias on Monday and committed to raising the issue with the company.

Dias, speaking at a press conference Tuesday, said he welcomed increased support from government after a frustrating amount of silence.

“Fighting General Motors is a significant enough battle, I ought not to have to fight with the premier of Ontario or the prime minister of the country.”

Dias said about 100 unionized workers at Oshawa auto parts supplier Inteva Products walked off the job in Whitby, Ont. Tuesday to draw attention to how the Oshawa closure will affect supplier jobs as well.

Unifor not ready to give up

He said GM can expect more actions to put pressure on the company to reverse its decision.

“Though Mary Barra and others keep saying sorry, this decision is final, we don’t view it that way at all. This is about greedy motors. This is about a poor decision.”

GM announced in late November that it would wind down its Oshawa operations by the end of 2019 at a loss of about 2,600 unionized workers and 340 other staff.

Car parts maker Magna International Inc. said Tuesday that the Oshawa shutdown, as well as four potential GM plant closures in the U.S., had hurt its outlook for the year ahead.

“Our North American business reflects the negative impact of the recently announced General Motors assembly plant actions,” Magna said in its financial outlook, which came in a little below analyst expectations.

Indigenous leaders are less than thrilled with Trudeau’s cabinet shuffle