A Saudi teen who arrived in Canada Saturday after fleeing her family says she needed to risk her life in order to live freely and be independent, and is very happy to be in Canada.

“I felt that I was reborn, especially when I felt the love and the welcome.”

Rahaf Mohammed al-Qunun, 18, told the CBC’s Susan Ormiston in an interview on Monday that she never thought there was even a one per cent chance that she would be able to come to Canada, or that people would be talking about her story around the world.

Mohammed — she has dropped “al-Qunun” from her name because her family has disowned her — claims she was physically and mentally abused by her family since she was 16 years old, and that she thought about escaping for years.

“I was exposed to physical violence, persecution, oppression, threats to be killed. I was locked in for six months,” she said, in Arabic, describing what happened after she cut her hair.

“I felt that I could not achieve my dreams that i wanted as long as I was still living in Saudi Arabia.” 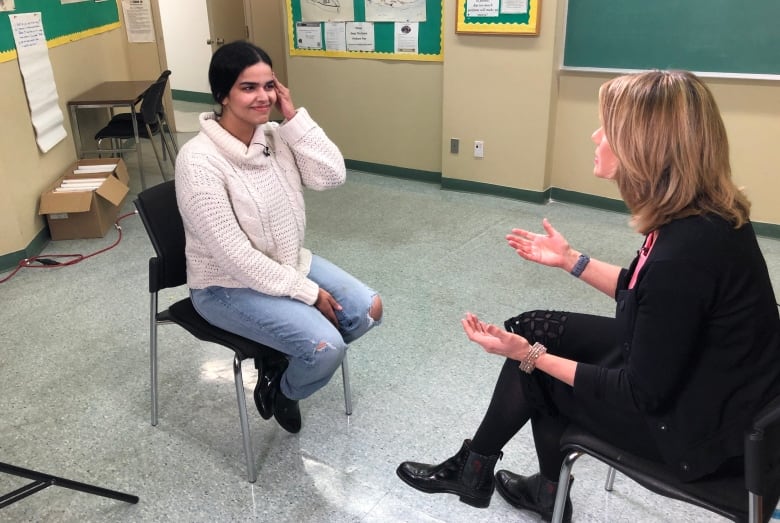 Mohammed told the CBC’s Susan Ormiston she had since been disowned by her family. (Sylvia Thomson/CBC)

When she turned 18 she felt able to try to escape, she said, because she would be treated as an adult around the world, and that she would be able to make her own decisions.

She knew a family vacation to Kuwait in early January was her chance. “From awhile ago I was trying to convince my parents to go to Kuwait because as long as I’m in Saudi Arabia, I cannot leave. But once I’m in another country I can travel and it’s allowed,” she said.

Mohammed said she waited until her family went to sleep early one night, the very last day of their trip, and then bought her ticket to Thailand and left the hotel room at 7 a.m.

But she was stopped at the airport in Bangkok. Mohammed was denied entry and had her passport seized. With the threat of being sent back to her family, she barricaded herself in a hotel room and used Twitter to plea for help.

“My greatest fear,” she said, “was if they [my family] find me, I would disappear and I wouldn’t know what would happen to me after that.” She even wrote a letter to her friends, because she says she was prepared to end her life in the hotel room before she would let herself be taken.

“I wrote it and I sent it to my female friends, should I disappear they would publish it to the whole world.”

Her tweets and her case drew international attention, and Thai officials eventually agreed to let her stay in Bangkok under the protection of United Nations officials.

She said when the UN officials showed up at her hotel, she didn’t believe at first that it was true, that her pleas had been heard. She asked them to prove who they were. When they did, she said she broke down and cried. That was the moment she began to believe that what she had done might have worked.

Still, as happy as she is to be free, to be in Canada (despite the cold, she said), Mohammed is clearly upset that it has meant losing her family. She said she received a message from them, telling her she was disobeient and now disowned. She started to cry during the interview, saying she didn’t expect that. She said she is very sad, so sad that she can’t even talk about it. 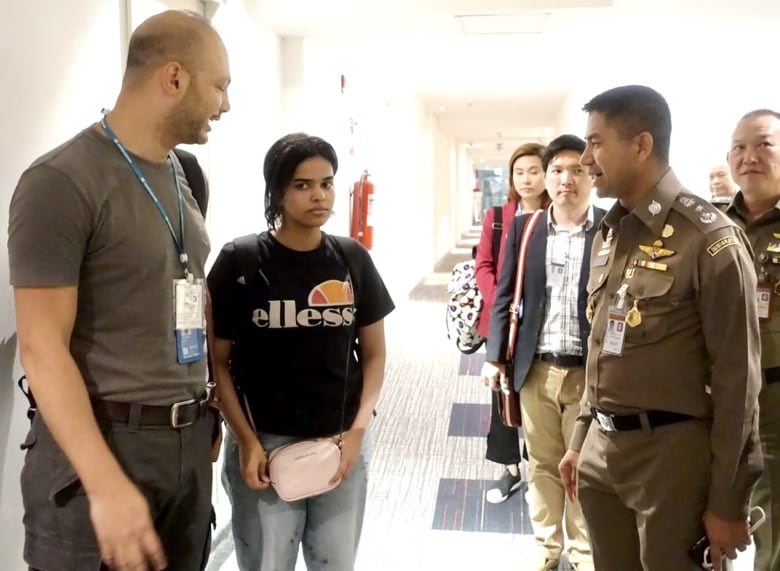 Mohammed speaks with Thai Immigration Police Chief Surachet Hakparn, right, and an unidentified UN official at a hotel inside the Suvarnabhumi international airport on the outskirts of Bangkok, Thailand, on Jan. 7. (Thai Immigration Bureau/EFE/EPA)

Saudi Arabia ranks among the worst countries for women’s rights and equality. The World Economic Forum ranked it 141 out of 149 in its 2018 report on gender equality. Mohammed said she endured daily oppression and violence from her mother and brother. Her father, she said, did not live with the family, but still exerted control over her in terms of what she could study and where she could work.

Mohammed said now that she is in Canada, she is going to do all the things she hasn’t been able to do before: explore, study, learn English and get a job.

She also wants to continue to be a voice for the women still in Saudi Arabia, but she also hopes that they will fight for changes themselves. She said she knows many women who have fled Saudi Arabia, but added she wouldn’t encourage women to do it, as they would be putting their lives at risk. She wants them to fight.

But if nothing changes, she said, escape. 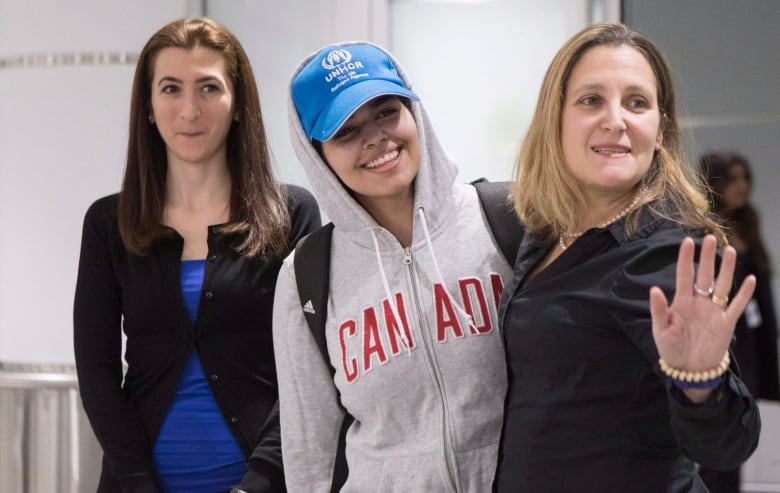