Giant rocks from space are falling from the sky more than they used to, but don’t worry.

For the past 290 million years, large asteroids have been crashing into Earth more than twice as often as they did in the previous 700 million years, according to a new study in Thursday’s journal Science.

But no need to cast a wary glance up. Asteroids still only smack Earth on average every million or few million years, even with the increased crash rate. NASA’s list of potential big space rock crashes shows no pending major threats. The biggest known risk is a 4,200-foot (1.3-km) wide asteroid with a 99.988 per cent chance that it will miss Earth when it whizzes very near here in 861 years.

Tell that to the dinosaurs. Most scientists think dinosaurs and a lot of other species went extinct after a huge space rock crashed into Central America about 65 million years ago.

“It’s just a game of probabilities,” said study lead author Sara Mazrouei, a University of Toronto planetary scientist. “These events are still rare and far between that I’m not too worried about it.” 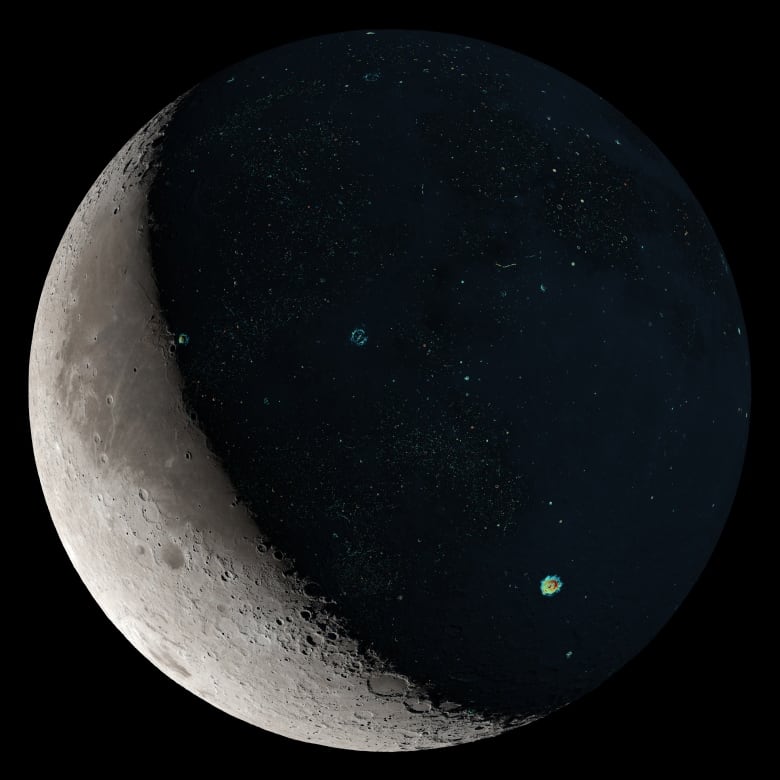 Moon’s young craters (larger than 10 kms, younger than one billion years old). The researchers compiled a list of impact craters on Earth and the moon that were larger than 20 kilometres wide and came up with when the impacts occurred. (Dr. A. Parker, Southwest Research Institute)

Mazrouei and colleagues in the United Kingdom and United States compiled a list of impact craters on Earth and the moon that were larger than 20 kilometres wide and came up with the dates of them. It takes a space rock that’s 800 metres wide to create holes that big.

But we can see relatively few big craters on Earth because the planet is more than 70 per cent ocean and past glaciers smoothed out some holes, said University of Toronto planetary scientist Rebecca Ghent, a study co-author. 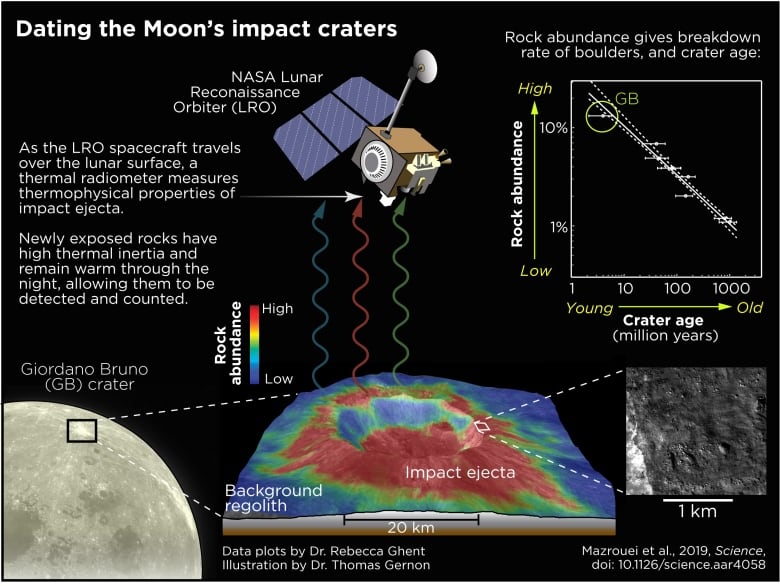 Extrapolating for what can’t be seen brings the total to about 260 space crashes on Earth in the last 290 million years. Adding in other factors, the science team determined that the current space crash rate is 2.6 times more than the previous 700 million years.

Craters older than 650 million years are mostly wiped off on Earth by glacial forces so the scientists used impact craters on the nearby moon as a stand-in for holes between 650 million and 1 billion years old. The moon is a good guide for estimating Earth crashes, because it is close enough to be in the same bombardment path and its craters last longer.

So what happened nearly 300 million years ago?

“Perhaps an asteroid family was broken up in the asteroid belt,” Mazrouei speculated. The space rocks then headed toward the Earth and moon, and the planet got slightly more because it is a bigger target and it has higher gravity, Ghent said.

Outside scientists are split about the research. Jay Melosh at Purdue said he found the number of craters too small to come to a reasonable conclusion, but Harvard’s Avi Loeb said the case was convincing.

Humans might not have emerged without mass extinctions from space rocks about 250 million and 65 million years ago, Loeb said in an email, adding, “but this enhanced impact rate poses a threat for the next mass extinction event, which we should watch for and attempt to avoid with the aid of technology.”

“This demonstrates how arbitrary and fragile human life is,” Loeb wrote.

7 phone wallet cases that keep your cards accessible and safe