Public Safety Minister Ralph Goodale is brushing off recent threats from China’s envoy to Canada, who warned of “repercussions” if the federal government bans the Chinese firm Huawei Technologies from supplying equipment to Canadian 5G networks.

Goodale spoke to reporters Friday during the Liberal cabinet retreat in Sherbrooke, Que., a day after Ambassador Lu Shaye made comments to the media at the Chinese Embassy in Ottawa.

Ottawa is studying the security implications of 5G networks. Unlike some of its allies, however, Canada has not announced a ban on Huawei equipment.

If Canada does ban Huawei from its 5G, “I believe there will be repercussions,” Lu said through an interpeter during Thursday’s news conference.

He urged Ottawa to make a “wise” decision, but did not say what those “repercussions” could be.

“We understand that those sorts of comments will be made in the process, but we will make our judgment based on what’s right for Canada and not be deterred from making the right decision,” he told reporters.

Chinese ambassador, Lu Shaye, warns there may be “repercussions” if Canada bans Huawei from its 5G network

Goodale wouldn’t say when Canada is expected to finish its 5G review.

“We will make the appropriate analysis and take the decision ultimately that we believe to be in Canada’s national interests,” he said.

“We’ve made it abundantly clear that we will not compromise national security.”

Huawei has long insisted it is not a state-controlled company and denies engaging in intelligence work for the Chinese government. However, Chinese law dictates that companies must “support, co-operate with and collaborate in national intelligence work.”

Most of Canada’s partners in the Five Eyes intelligence-sharing alliance have taken action against the telecommunications firm.

New Zealand and Australia have banned the use of Huawei products in their 5G network development, fearing Huawei could use its access to spy for the Chinese government.

On Wednesday, a bipartisan group of U.S. lawmakers introduced bills that would ban the sale of U.S. chips or other components to Huawei, ZTE Corp. or other Chinese firms that violate U.S. sanctions or export control laws.

The bills specifically cite ZTE and Huawei, both of which are viewed with suspicion in the United States because of fears that their switches and other gear could be used to spy on Americans. Huawei is the world’s biggest telecommunications equipment maker.

“Other countries have obviously made their views known, and their views are important to us. And we will weigh all of that very carefully and in the decision-making process,” said Goodale. 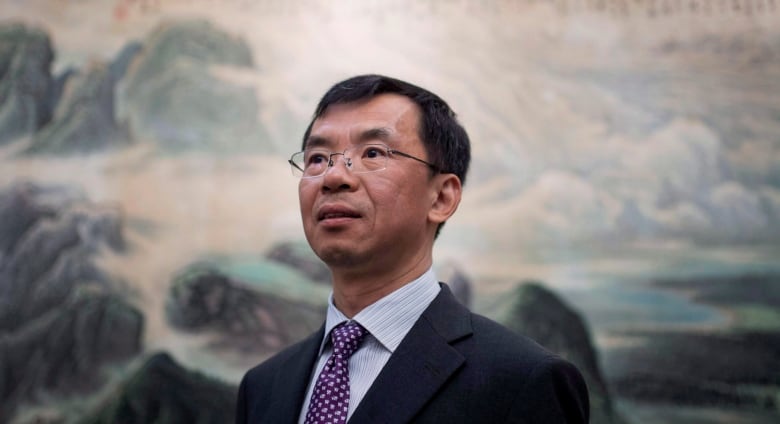 The back-and-forth between the ambassador and minister is the latest development in a deepening bilateral dispute.

Relations between China and Canada were put on ice last month when Canadian authorities arrested Meng Wanzhou, chief financial officer of Huawei, in Vancouver on a U.S. extradition request.

China then detained two Canadian citizens: businessman Michael Spavor and Michael Kovrig, a Canadian diplomat on leave to work for a non-governmental organization based in China.

Lu maintains the arrests of Spavor and Kovrig were legal and just while the arrest of Meng was the opposite.

Earlier this week, a Chinese court sentenced Canadian Robert Schellenberg to death for his alleged role in the smuggling of 222 kilograms of methamphetamines. His lawyer said he plans to appeal.

In the wake of that ruling, Prime Minister Justin Trudeau accused Beijing of arbitrarily using the death penalty and called world leaders to solicit their support.

Foreign Affairs Minister Chrystia Freeland says she will continue to see support from Canada’s allies in its dispute with China despite warnings from the Chinese ambassador to Canada to not to do so. 1:12

Lu said the current impasse could be resolved through negotiations, but those negotiations would be threatened if Canada were to ban Huawei Technologies from participating in Canada’s new 5G network for security reasons.

‘Last arrow in our quiver’

The Conservatives have urged Trudeau to speak directly to Chinese Xi Jinping. Canada’s ambassador to Beijing, John McCallum, was in Ottawa Friday to brief a Parliament committee. He described a phone call to Xi as the “last arrow in our quiver.”

“I think it is more effective if other means are deployed before we get to that point,” he said.

The briefing was held behind closed doors. McCallum told reporters he expected to tell the committee some things that the families of Spavor and Kovrig might not want aired publicly. 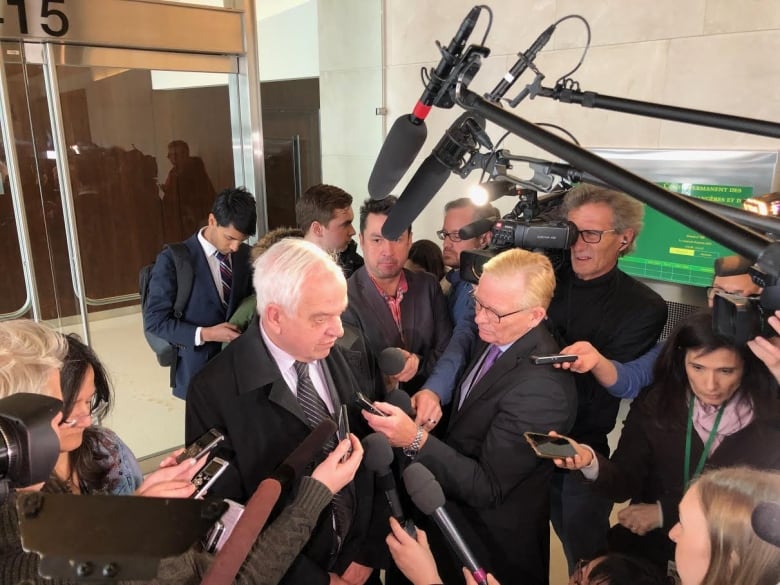 John McCallum, Canada’s ambassador to China, talks to reporters after briefing members of the Foreign Affairs committee regarding China in Ottawa on Friday, Jan. 18, 2019 (Chris Rands/CBC)

Despite the diplomatic tensions, McCallum said he believes it’s safe for most Canadians to travel to China, but added anyone who has had a past run-in with Chinese authorities might want to stay away.

He said his security detail suggested he remove the Canadian flags on his diplomatic car, but he called it a “crazy idea.”

“I drive proudly with the Canadian flag,” he said.

Both countries have issued travel warnings.

On Monday night, Global Affairs changed its online travel advisory for China to advise Canadians to “exercise a high degree of caution due to the risk of arbitrary enforcement of local laws.”

A day later, China issued its own advisory and urged its citizens to “fully evaluate risks” and exercise caution when travelling to Canada, citing the “arbitrary detention” of Meng.