The last thing Alan Neumiller expected to find when he was rummaging through old stuff was a comic book worth $18,000.

“It was a fluke, I guess you could say,” Neumiller told CBC Radio’s Saskatoon Morning.

Neumiller said he was doing some cleaning when he came across a box of comic books that was collecting dust.

“I don’t know why I hung on to this box for so long because I moved about three or four times,” he said.

“I hadn’t looked at those books in years,” he said. “I thought of possibly taking it down somewhere to one of the Salvation Army stores or something like that for people just to pick up.”

That’s when he came across a newspaper article about Lee Pearson, owner of Bridge City Comics in Saskatoon, receiving a special edition Archie comic book.

Neumiller thought he’d bring the comics by Pearson’s store, thinking the store owner could at least give them to a deserving person.

Pearson said he was unimpressed with Neumiller’s collection at first — but that quickly changed.

“After about 10 or 15 comics, I started hitting some really old Marvel comics and a lot of them were considered key issues, which means something really important happened in them and it always drives the value up,” he said. 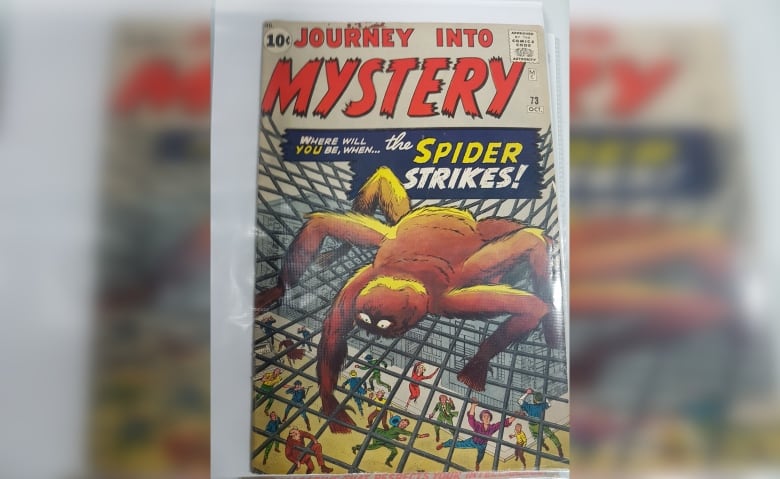 Pictured is one of the comics Alan Neumiller brought to Bridge City Comics in Saskatoon. Journey into Mystery comics were published by Marvel from 1952 until 1966. (Submitted by Lee Pearsons)

“Then I hit one certain comic — which was Fantastic Four number five — and my forehead started getting warm. I actually felt really faint.”

Pearson said he checked the value of the comic and found it would go for about $18,000, based on its condition.

Neumiller said he thought he was going to have to call an ambulance after seeing Pearson’s reaction.

“He was getting pretty short of breath and pale, so he got pretty excited over the whole thing,” said Neumiller.

Neumiller said his valuable comics — especially the Fantastic Four comic — are currently locked away until he and Pearson decide what to do with them.

“[Pearson] is doing some more investigating into it and trying to find other people that could be interested in them, besides himself,” said Neumiller

​Regardless of the outcome, Neumiller said finding the old comic books was a twist of fate for both him and Pearson, a coincidence of timing in seeing the newspaper article and getting together with Pearson.

“So we’ll just see where it goes from here,” he said.

Meanwhile, Pearson said he learned an important lesson from seeing what was in Neumiller’s collection.

“I will never ever again assume that there’s nothing in someone’s stack of comics,” he said.