Almost 48 years after it was collected, scientists believe a rock sample taken during an Apollo mission to the moon originated from Earth roughly four billion years ago.

From Apollo 11 — the first mission to land on the moon — to the final Apollo 17 mission, astronauts visiting the moon were tasked with many scientific objectives, including collecting rocks to bring back for analysis.

The team of scientists published their findings in the journal Earth and Planetary Science Letters and used new technology to study a two-gram sample of moon rock collected by the Apollo 14 astronauts in 1971. Their findings suggest that, instead of the rock originating on the moon, it came from Earth four billion years ago. 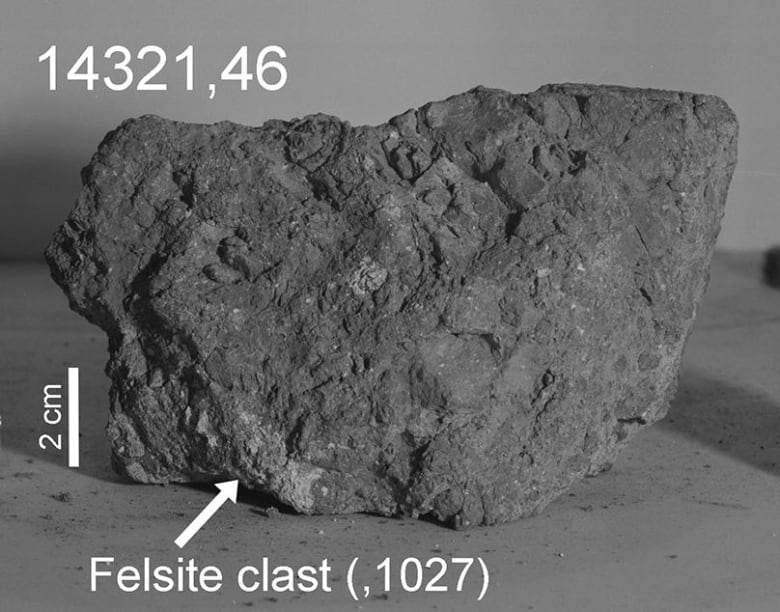 This is the rock fragment brought back by the Apollo 14 mission. Scientists analyzed its composition from a two-gram sample. (David A. Kring)

The researchers believe the rock sample is a type of felsite, which is composed of feldspar, quartz and a tiny bit of zircon. It’s similar to granite, which is the type of rock that forms continents. Scientists believe it is produced through plate tectonics, the way Earth’s outer crust moves. It is highly unusual to find it on the moon.

The findings suggest that the best explanation for the existence of that type of rock on the moon is that it’s not from the moon at all. It’s from Earth.

Chemical analysis of the fragment revealed it had crystallized. The scientists suggest conditions on Earth just about 20 kilometres below the surface about four to 4.1 billion years ago, could have caused this process.

“It was confirmation that we had something granitic and that we had large enough impact events to launch things from the Earth,” says co-author David A. Kring, principal investigator at the Center for Lunar Science and Exploration at the Lunar and Planetary Institute. “It’s amazing that the rock survived.”

It’s amazing because this particular sample underwent three significant impacts. The solar system was rife with large bodies that were zipping around the sun as planets and moons were forming. Around this time — referred to the Late Heavy Bombardment Period — it’s believed Earth was being blasted with debris.

Shortly after our planet’s formation, several large bodies, such as an asteroid or comet, slammed into Earth, eventually displacing the rock and sending it into space. It reached the lunar surface. The moon would have been 2.8 times closer to Earth than it is today.

Once there, the theory goes, it survived subsequent impact events including one roughly 3.9 billion years ago, when a large impact partially melted the rock, and it likely was buried beneath the moon’s surface in the Imbrium Basin.

The moon was much closer to Earth than it is today when the rock fragment was ejected. (LPI/David A. Kring)

But it wouldn’t stay there.

There was another large impact in the region that sent the fragment roughly 200 kilometres from its landing location.

And finally, the researchers theorize that about 26 million years ago, an asteroid impacted the moon, creating the 340-metre diameter Cone Crater, bringing it back up to the surface where the astronauts found it.

There could be another explanation, albeit less likely, the scientists say.

The rock could have crystallized on the moon. However, it would have to have been 130 kilometres below the surface, which would place it in the moon’s mantle, something that would require an entirely different understanding of the moon than we currently have.

Gordon (Oz) Osinski, director of the Canadian Lunar Research Network and professor at Western University’s departments of earth sciences and physics and astronomy, believes the researchers’ explanation is the most plausible.

“It’s totally feasible, and there’ve been a few papers over the last several decades that this is possible, and this particular one, they definitely present some convincing evidence,” he says.

“Hopefully this will spur interest in people looking at other similar [samples] in the Apollo collection.”

Most of the rocks on Earth are younger than four billion years old, and both scientists say that, in order to determine how our planet formed, finding these older rocks is key.

With NASA’s recent attention on returning humans to the moon, Kring hopes more samples will be collected. And that, he says, will help us learn about our early solar system, and thus, ourselves.

“The larger number of samples that we find, the better picture we’ll paint of the early Earth,” says Kring. “And I think all of us are interested in the origin and early evolution of our planet. And there’s no doubt the best record of those processes are on the moon.”

Where’s my robot lawn mower? Roomba-maker now has an answer

Diversity and inclusion are hot-button issues, but for all the attention they get, there’s still work to be done in the tech sector, according to a recent Gartner blog.

Citing a range of challenges that include pay inequity, lack of diversity in corporate management, and difficulty recruiting diverse talent, the blog suggests three possible remedies for organizations trying to become more diverse and inclusive: having a long-term plan but focusing on one aspect that will make the most benefit, setting targets and making leadership accountable, and committing resources.

The call for such strategies finds support in a report from the Brookfield Institute revealing that Canada’s technology sector has a disappointing track record when it comes to inclusion and equity, with women “four times less likely to be employed in the sector than men, and earning on average $7,300 less than men in technology jobs.”

The findings are just as grim in a January 2020 report funded by Canada’s Future Skills Centre. According to this document, despite corporate commitments to diversity, “decades of initiatives designed to advance women in technology have scarcely had an effect: The proportion of women in engineering and computer science in Canada has changed little in 25 years.”

And women are not the only disadvantaged group, says the report. “The under-employment of skilled immigrants and under-representation of women and other groups in the ICT industry suggests that recruitment and retention policies and practices of the very firms complaining about this [skills] gap may be contributing to the problem.”

Until we do a better job of addressing inclusion and diversity, career opportunities will continue to be limited for women, internationally educated professionals, racialized minorities, First Nations, Inuit and Métis people. In addition to being a very human issue, this is also one that perpetuates the ICT skills gap by failing to tap into a supply of well-qualified labour.

On the bright side, there are technology companies and organizations across Canada that are truly determined to create opportunities for those who are under-represented in the digital talent pool. There is also an opportunity to recognize their efforts during Channel Innovation 2021: Adapting to the New Customer Experience, a 2.5-hour, virtual event on April 28, 2021.

A showcase for independent software vendors (ISVs) and Canadian channel innovators, the Channel Innovation 2021 celebration will take place on CIA-TV, a unique ITWC platform that allows the audience to take in the show, download related content and videos, and network in live breakout rooms. There are six award categories, including the C4 Award for Diversity and Inclusion. Nominating is simple. Whether a self- or third-party nomination, there are only two main questions to answer and an opportunity to include a supporting document or image.

Winning entries will be announced during the celebration and profiled in the Channel Daily News Magazine and in Direction Informatique, ITWC’s French-language publication devoted to the Quebec marketplace. They will also receive a digital badge for use on their websites and on social media to help gain industry-wide recognition and end-user exposure.

The media attention and recognition are reason enough to vie for this honour, and we always need things to celebrate during a global pandemic, but the real value in awards for diversity and inclusion is in setting an example for others to follow. The news is full of the ways we are falling down when it comes to equity in the IT sector. Let’s take some time to highlight the success stories and encourage other tech innovators to step up.

In celebration of International Women’s Day, one of Canada’s leading female tech entrepreneurs will be giving a virtual keynote for residents of Peterborough and the Kawarthas on Tuesday, March 9th at 7 p.m.

The Innovation Cluster is hosting Saadia Muzaffar as part of its ‘Electric City Talks’ series.

Muzaffar is a tech entrepreneur, author, and passionate advocate of responsible innovation, decent work for everyone, and prosperity of immigrant talent in science, technology, engineering, and mathematics (STEM). She is the founder of TechGirls Canada, a hub for Canadian women in STEM, and co-founder of Tech Reset Canada, a group of business people, technologists, and other residents advocating for innovation that is focused on the public good.

In 2017, Muzaffar was featured in Canada 150 Women, a book about 150 of the most influential and groundbreaking women in Canada. Her work has been featured in CNNMoney, BBC World, Fortune Magazine, The Globe and Mail, VICE, CBC, TVO, and Chatelaine.

Muzaffar’s March 9th talk, entitled ‘Redefining Term Sheets: Success, Solidarity, & The Future We Want’, will inspire women to achieve success in all areas of life, including in business by providing strategies for obtaining funding.

“It is impossible to explain how women only get 2.2 per cent of funding for their ventures while we constitute a majority of the population, without acknowledging long-standing structural and systemic bias,” Muzaffar says, describing her talk. “Women know these odds in our bones because we feel them in too many boardrooms, banks, media advertisements, and venture competitions — yet women are the fastest-growing demographic in new businesses.”

ARK Invest’s Cathie Wood is joining the board of Canadian technology company mimik.

Vancouver-based mimik is an edge computing company that effectively turns devices like phones into private cloud servers. It has already teamed up with Amazon Web Services and IBM on edge computing – two of the bigger players in the space.

The AWS partnership gives software developers access to mimik’s cloud platform. Together, edge devices including smart phones, tablets, and Internet of Things (IoT) products can act as extensions of the AWS cloud. With the IBM partnership, mimik’s technology will be included in automation and digital transformation across manufacturing, retail, IoT and healthcare.

All of mimik’s business lines fit in with Wood’s broad ‘next generation internet’ thesis, one of her big five investment themes. The company itself is private and Wood is not an investor.

However, as Citywire noted in January, Wood has hinted in interviews that ARK is exploring the launch of a private markets strategy.

Wood joins a relatively high profile board at mimik. Other members include  Allen Salmasi, a pioneer in mobile technology who was previously with Qualcomm, and Ori Sasson, managing director of Primera Capital, who was an investor in VMWare and other technology companies.

‘I’ve always believed in backing founders who are at the forefront of innovation,’ Wood said in a statement on her decision to join mimik. ‘At mimik, [they] have built a foundation for the next generation of cloud computing.’