Female artists dominated at the Grammy awards Sunday night, with the spotlight of “music’s biggest night” firmly focused on powerhouse performances by women.

The Recording Academy — which has been trying to address criticism around the lack of diversity at its annual celebration of music — has made some strides when it comes to nominating more diverse musicians. That was on display Sunday, as the Grammys registered several historic wins for rap artists and saw female acts triumphing with two of the night’s top trophies (album of the year, best new artist), as well as in categories including rap album, country album, R&B album and pop vocal album.

Producers of this year’s Grammy telecast chose to, for the most part, turn the show over to female artists, highlighting the talent of host Alicia Keys and honouring musical icons like Dolly Parton, Diana Ross and Aretha Franklin.

Then there was the noticeable boost in top-nominated female acts (including Kacey Musgraves, Janelle Monae, Cardi B, H.E.R., Dua Lipa and Brandi Carlile) performing — and commanding attention with their time onstage.

“I just wanted to say how honoured I am to be nominated alongside so many incredible female artists this year, because I guess this year we really stepped up,” Dua Lipa quipped upon winning best new artist, a clear retort to outgoing academy head Neil Portnow’s infamous comments backstage at last year’s telecast.

That said, the show wasn’t without mishap. Here’s a round-up of some memorable moments from the night.

The star-studded Parton tribute had even BTS bopping. Late in the show, St. Vincent and Dua Lipa offered a seductive performance of Masseduction.

But slamming together musical notables of different genres and generations or simply signing big names to perform yet another tribute doesn’t always pay off (more on J. Lo later).

Obama in the house

“Music has always helped me tell my story,” Obama said. “Whether we like country or rap or rock, music helps us share ourselves. It allows us to hear one another.”

Michelle Obama is THE biggest star in the room right now. <a href=”https://twitter.com/hashtag/GRAMMYs?src=hash&amp;ref_src=twsrc%5Etfw”>#GRAMMYs</a>

In one of the night’s surprise appearances, Grammy-and-Juno-snubbing hip hop star Drake was actually in the house to accept the Grammy when God’s Plan won the trophy for best rap song.

“If there’s people who have regular jobs who are coming out in the rain and snow, spending their hard-earned money to come to your shows, you don’t need this right here, I promise you, you already won,” Drake told fellow artists from the stage after his win.

But just when we thought perhaps his beef with award shows had ended, producers bluntly cut off his real-talk speech, sending the show to commercial at what they subsequently called a “natural pause” (with Drake apparently declining the offer to come back and finish his thought). 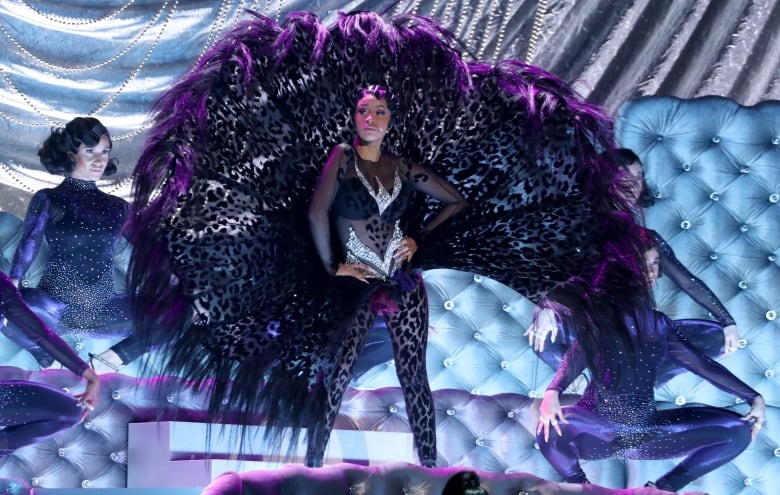 Cardi B, seen performing Money during the ceremony, is the first solo female winner of the best rap album Grammy. (Matt Sayles/Invision/Associated Press)

And speaking of no-shows, Childish Gambino (aka Donald Glover) made history with his blistering track This is America winning both song of the year and record of the year.

It’s the first time in Grammy history a rap song has won either category. It was an embarrassing moment for Grammy organizers that such a major winner didn’t feel compelled to attend. (The song also won best rap/sung performance and best music video)

Another historic win came when rapper Cardi B became the first solo female rapper ever to win best rap album (for Invasion of Privacy).

Motown by way of Sin City 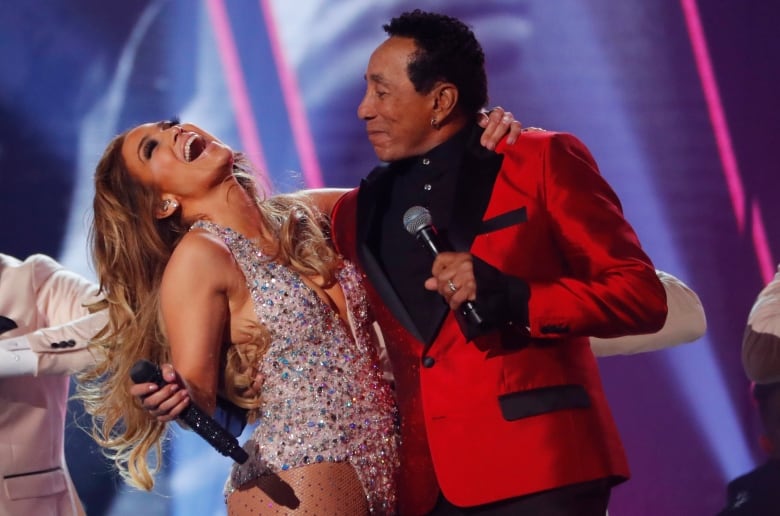 Jennifer Lopez performed with Smokey Robinson in a tribute to Motown. The choice was controversial before the show even happened, and even more so after her performance. (Mike Blake/Reuters)

A decision that was maligned by many from the moment it was revealed was the Grammys’ decision to have Jennifer Lopez lead a tribute to Motown. A major complaint was that the tribute to the label that brought the world artists like Marvin Gaye, The Supremes, Glady Knight and Stevie Wonder, should come from a black artist.

And then there was the performance question.

Though widely acknowledged for her phenomenal dancing, J.Lo has never been considered an incredibly strong vocalist, so building a multi-song tribute around her (even with the assistance of Motown legend Smokey Robinson, Grammy host Keys and R&B singer-songwriter Ne-Yo) felt inexplicable to many in the audience.

It’s not surprising that the set, which seemed to channel her Las Vegas residency, earned a significant backlash on social media — especially when a tribute to Aretha Franklin later in the show appeared to get truncated to just one of the Queen of Soul’s songs.

Host with the most 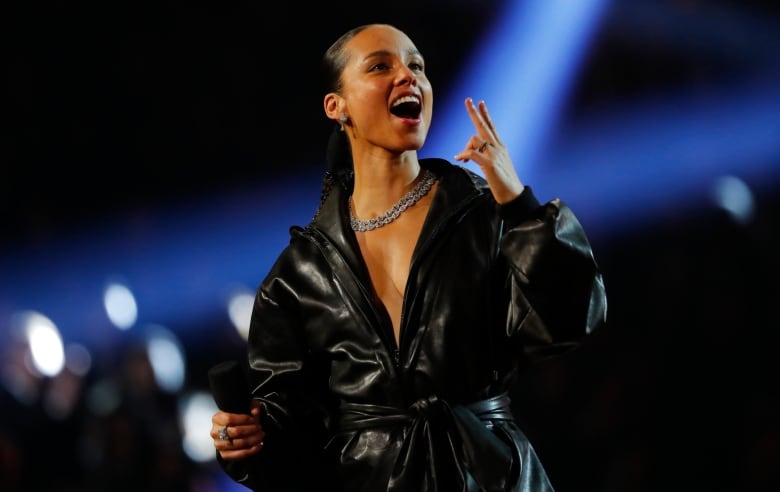 Host Alicia Keys was a major part of the show, putting on her own performances as she carried viewers through the star-studded night. (Mike Blake/Reuters)

When you land a 15-time Grammy-winner as host, you want to make the most of it — and Grammy producers definitely showcased Keys as much as they could.

She shared personal stories, offered upbeat optimism about the music industry and, delivered a terrific two-piano bit that showed that lengthy musical medleys don’t have to be stuffed with cameos to actually be enjoyable.

Coming together on the red carpet

And lest you think major moments only happen onstage, Canadian nominees Young Spirit brought the roar of the red carpet to a momentary halt and drew everyone’s attention with a Cree round dance.

Crowd gathers to listen to Frog Lake, Alberta-based group Young Spirit perform what they told me is a Cree round dance. They were nominated for best regional roots album. Said they hope the music inspires Indigenous youth to “stand up and be proud” <a href=”https://twitter.com/hashtag/Grammy2019?src=hash&amp;ref_src=twsrc%5Etfw”>#Grammy2019</a> <a href=”https://t.co/jcvP5Ot1GY”>pic.twitter.com/jcvP5Ot1GY</a>