Sunday’s rally, about 200 kilometres northeast of Edmonton, was billed as the first Indigenous rally in support of pipelines.

Organized by the local Region One Aboriginal Business Association, more than 30 trucks made their way around Lac La Biche and through a couple of neighbouring communities, such as Plamondon, Alta.

Family and friends gathered in the Bold Center community hall, many holding signs reading: “I love Canada oil and gas.”

ROABA held the rally to highlight what it considers Alberta’s northern Indigenous communities’ support for pipelines and opposition to Bill C-69, federal legislation that aims to change the way energy projects are approved.

Shawn McDonald, president of ROABA, believes the legislation will delay projects and add to the unemployment.

He said the association is trying to “show support for Alberta families that are really hurting right now.”

“That’s our main objective, is just to show our support.”

Robert White, from the Kikino Metis Settlement south of Lac la Biche, was one of dozens participating in the convoy. He drives a truck for a company that supplies heavy equipment to the oil patch.

And he’s one of the lucky ones. As a supervisor, he’s had to lay off workers in recent weeks. 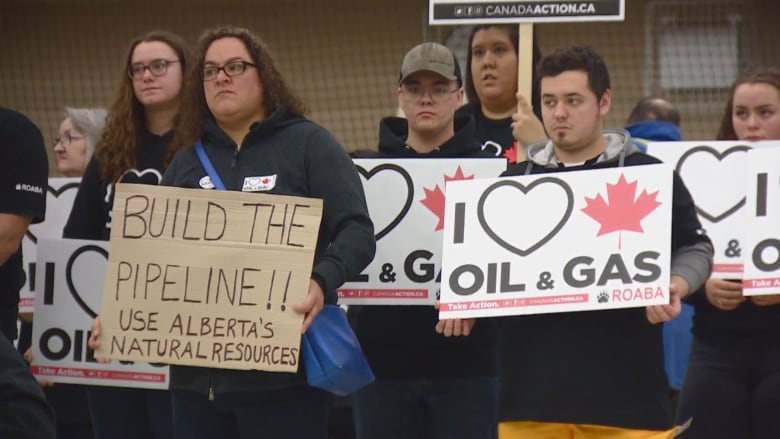 “It really affects our community as a whole, like our local businesses.”

White didn’t want to speculate as to why some First Nations communities, especially in B.C., tend to oppose pipelines.

“We have to get to work, that’s the bottom line.”

But the pipeline expansion project is stalled after a federal court order cancelled its approval, ruling that the government hadn’t consulted enough with Indigenous groups.

Another protest convoy is planned for this week, starting from Red Deer, Alt., and heading to Ottawa with a projected arrival date of Feb. 19.