What’s already being called the winter’s biggest snowstorm is upon us.

Environment Canada says southern Quebec will be walloped by as much as 40 centimetres of snow between now and Wednesday evening.

The warning, in fact, blankets much of the province, from Gatineau all the way to the Lac-Saint-Jean region.

The low-pressure system has moved in from the American midwest, intensifying over the Great Lakes.

Expect temperatures of around – 13 C overnight. With the windchill, that will feel closer to – 22.

Among other schools that have already announced closures are Trafalgar School, the Study and the Oral School for the Deaf.

Quebec’s Public Security Minister Geneviève Guilbault said the provincial police are ready with an emergency plan to track problems, and 100 extra officers are being deployed.

“Everybody will be working tonight, for sure. There will be about 1,600 snow trucks on the road,” Guilbault said.

“We hope that if it’s possible, people will stay home or adapt their drive,” she said.

Expect the snow to fall at a rate of four centimetres an hour at the height of the storm, with at least 30 centimetres of snow in total falling by 6 a.m. Wednesday.

The morning commute will likely be a major challenge, with snow and blowing snow reducing visibility to near zero at times.

Montreal’s transit agency issued a warning to commuters Tuesday, reminding them to give themselves extra time to get around in the morning.

Work from home if possible

Most of the snow will be on the ground by Wednesday morning, but Guilbault said people should avoid driving if possible and consider working from home as strong winds will continue to blow snow onto roads.

The temperature is going to rise to around –2 C in the afternoon, he said, but even walking around outside will be made difficult by the wind. It will be particularly windy in the Quebec City area, with gusts reaching 80 km/h.

In Quebec City, the snow will start a bit later, and there won’t be as much.

Transports Québec says while it is ready to maintain the province’s 32,000 kilometres of roadways, drivers should do their part, as well.

Before heading out, people should check road conditions through Quebec511’s web, mobile and phone platforms.

Drivers should ensure their vehicle is well prepared for winter driving, cleared of snow and stocked with winter equipment, including a first-aid kit.

Drivers must adapt their driving to the conditions, the ministry says, keeping a safe distance from the vehicle in front of them and staying out of the the blind spots of snow-clearing and snow-removal trucks. 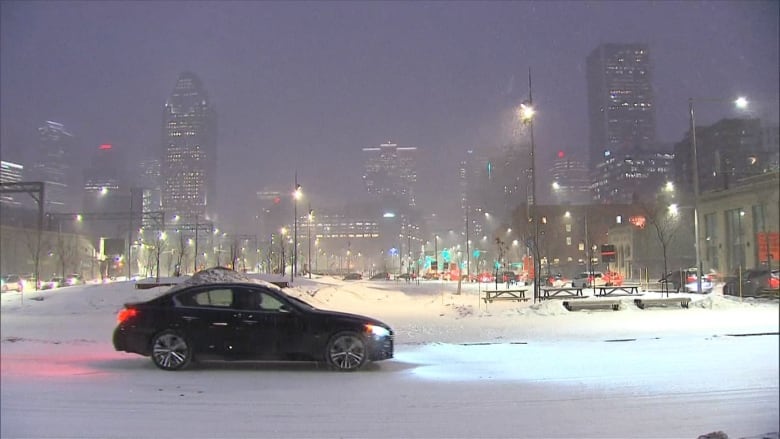 Montreal school boards have already announced schools will be closed Wednesday, after what’s expected to be the biggest snowstorm of the season overnight. (CBC)

Snow-removal operations on Montreal’s streets will begin when the snow stops falling and blowing.

Jean-François Parenteau, Montreal’s executive committee member in charge of citizen services, says that should be by early Thursday morning.

Parenteau said the city is in direct contact with the Transport Ministry in order to streamline the operations on highway and city streets.

Teams of blue collar and contract workers are standing by to clear the snow overnight, he said.

“This is a different situation than we’ve seen in the last weeks,” Parenteau said at city hall Tuesday.

In the meantime, workers will continue spreading abrasives on icy streets.

“Considering the quantity of snow, we will still have snow-covered streets and highways,” Parenteau said.

He recommended Montrealers leave their cars at home if possible and use public transit instead.