The Acadia hockey player who admitted to making an inappropriate comment during a university hockey game that triggered a brawl has been suspended for five additional games.

Axemen forward Rodney Southam of Saskatoon was informed Tuesday of the decision handed down following an investigation by Atlantic University Sport (AUS), the body that governs university sport in the region. 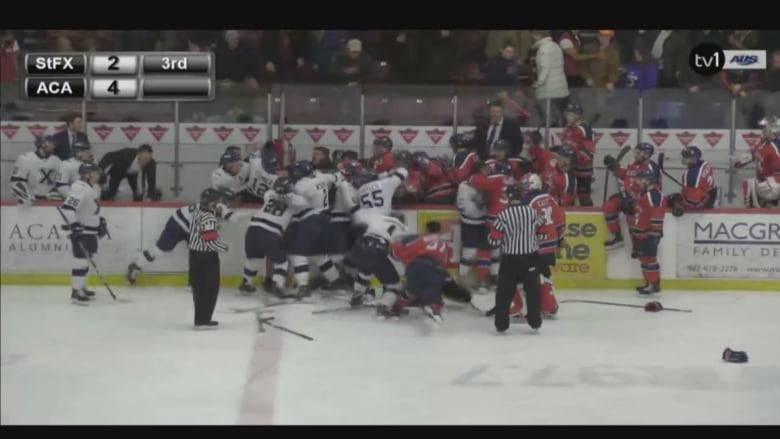 Several fights broke out near the Axemen bench during the Acadia- St. F X game on February 2. (AUStv)

“The AUS supports the decisions made by the men’s hockey sport chair,” Phil Currie, AUS executive director, said in a statement issued Tuesday.

The suspensions will take effect immediately and will carry over into the 2019-2020 regular season if necessary, AUS said.

Last week, AUS suspended 15 players and the head coaches for the Acadia Axemen and the St. Francis Xavier X-Men as part of its initial response to the melee that broke out Feb. 2 in Wolfville. Those suspensions totalled 39 games.

Southam was one of three Acadia players to be suspended for additional games on Tuesday.

Southam added he did not know Studnicka had a close link to a survivor of sexual assault. Southam also said he was once falsely accused of sexual assault when he played junior hockey in Western Canada.

Studnicka was the first player to publicly comment about the brawl when he issued a statement two days following the incident.

He said he was “the target of a derogatory comment related to a sexual assault survivor. It was this comment that instigated the altercation that followed.”

In a statement Tuesday, Acadia said it felt Studnicka’s public comments spurred “unfair” commentary on social media and in the mainstream media. It called Studnicka’s statement inaccurate and said it made a very difficult time “considerably worse.”

Studnicka, who fought Southam at centre ice, has not been suspended for any additional games. He was suspended for two games in an initial decision handed down Feb. 6.

Darren Burns of Acadia and Brad Peddle of St. FX have both been suspended for an additional eight games. The coaches were previously suspended for the last two games of the regular season.

“These suspensions are significant, coming at a time of year where most sanctions will be served during the playoffs,” said AUS men’s hockey chair David MacLean.

“A lot of really fine young people made serious judgment mistakes. I know they will learn from it and move on to bigger and better things. I want to thank everyone for their full co-operation.”

‘Could have been handled much better’

Currie later told CBC News there were leadership issues on both teams.

“The bench side of things could have been handled much better,” Currie said in an interview. “You know we expect that in our regulations in terms of coaches’ conduct and how they handle these situations.”

Currie said AUS will likely strengthen its standard of conduct policies around “egregious comments” as a result of this incident.

“We have general statements that are in our policies, but I think we have to be a little more aggressive around those kind of things.”

Acadia and St. FX are set to begin their first round playoff series Wednesday night in Antigonish.