Groups in favour of the federal carbon tax will take the stand in Saskatchewan’s Court of Appeal on Thursday morning.

Lawyers representing the Government of Canada, along with environmental groups like the David Suzuki Foundation, will argue in favour of the federal government’s plan to put a national price on carbon.

“There’s more pollution per person in Saskatchewan than any other part of Canada,” Amir Attaran, a professor with the Ecojustice Environmental Law Clinic, told reporters outside of court on Wednesday.

“When the Saskatchewan government says they’re doing a lot, they’re only doing a lot if last place counts.” 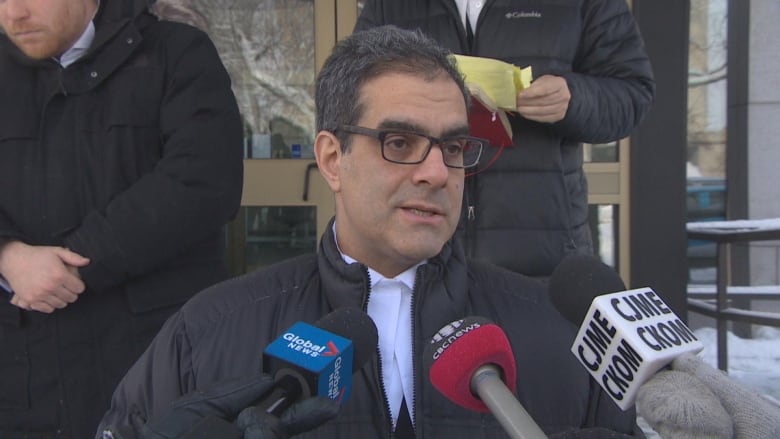 Amir Attaran, a professor with the University of Ottawa’s eco-justice environmental law clinic, is counsel for the Athabasca Chipewyan First Nation, one of 16 intervenors in the legal case. (CBC News)

Attaran is counsel for Athabasca Chipewyan First Nation, which is among the intervenors that support the federal government’s position.

On Wednesday, lawyers representing the Government of Saskatchewan argued the federal government is violating provincial jurisdiction with its price on pollution.

CBC Saskatchewan reporter Adam Hunter is in court to cover the legal challenge. Follow what’s happening through his tweets below. For those on mobile, click here.

However, lawyers for the federal government are expected to argue national carbon pricing should be allowed because climate change is a matter of national concern, and falls under the peace, order and good government clause of the Constitution.

Sixteen groups, ranging from the Canadian Taxpayers Federation (CTF) to the Agricultural Producers Association of Saskatchewan made submissions on Wednesday against the tax.

“This is going to take so much money from taxpayers,” said CTF executive director Todd MacKay. “We just don’t feel confidence that it’s going to help the environment.”

In court, one of the lawyers representing Saskatchewan said the province is not arguing that climate change is real.

“The government of Saskatchewan is not made up of a bunch of climate change deniers,” lawyer Mitch McAdam said in his opening remarks to the Saskatchewan Court of Appeal in Regina on Wednesday morning.

“The government recognizes that climate change is a serious issue that has to be addressed and that effective measures are required to deal with greenhouse gas emissions. None of that is in dispute.”

The province argues the carbon levy is an unfair, uneven, illegal tax and that it violates provincial jurisdiction.

Court is expected to resume at 9 a.m. CST.