About 100 Quebec tourists are stranded at a resort in Haiti due to violent, week-long street demonstrations.

The tourists bought all-inclusive vacation packages with Air Transat for the Royal Decameron all-inclusive beach resort, 80 kilometres north of the capital of Port-au-Prince.

But now they’re stuck because of the protests against high unemployment rates and skyrocketing inflation that are blocking roads, and making it impossible for buses to transport the tourists from the resort to the airport in Port-au-Prince.

Terry Watson of Sherbrooke, Que., is at the resort and was supposed to return from her week-long vacation last Sunday.

Watson and other travellers rented a helicopter to bring them to the capital, but by the time it arrived, their flight had already left.

“We’re very nervous. People have a hard time sleeping, everybody’s worried, some people are sick, they need medication,” she told CBC’s Quebec AM.

“We heard yesterday that [the unrest] could last a long time. We don’t want to be stuck here for months.” 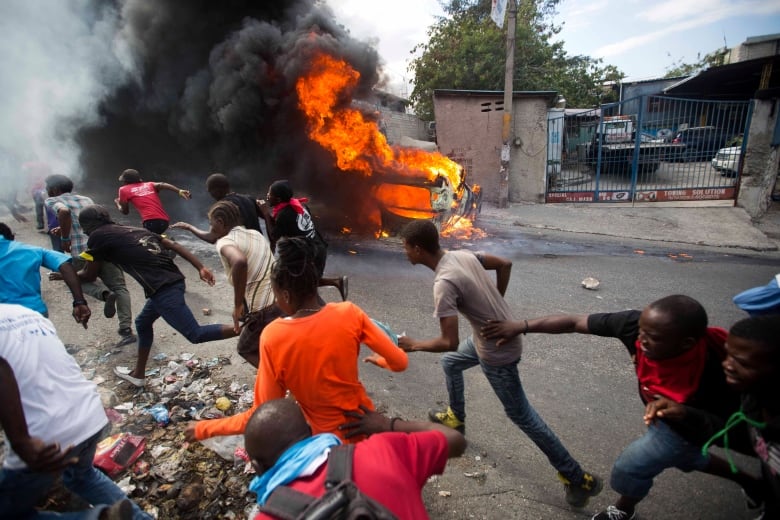 Demonstrators run away from police who are shooting in their direction as a car burns during a protest in Port-au-Prince on Tuesday. (Dieu Nalio Chery/Associated Press)

She said people are worried because no one is giving them information — all they’re being told is to stay at the hotel.

The resort, which is about a 1.5-hours drive from Port-au-Prince, is surrounded by guards. Watson said she feels safe there.

It’s not just vacationers who are stuck — a doctor and some nurses from New Brunswick have also been blocked from getting to the airport.

The protests began Feb. 7 and have worsened — seven people have died.

On Wednesday, Global Affairs Canada issued an advisory warning against all non-essential travel to the country. The Canadian Embassy in Haiti was closed on Thursday due to the unrest.

Debbie Cabana, spokesperson for Air Transat, told Radio-Canada the company hopes to organize a convoy to bring the tourists to the airport, under police protection.

There are only two scheduled Air Transat flights out of Haiti per week. The next one is Sunday, but the airline is trying to get the tourists out before that day.