Scientists think they’ve found evidence of extremely ancient organisms that could crawl and wriggle their way through the mud — extraordinary at a time when simple bacteria were previously thought to be the only living things on Earth.

The researchers discovered what appear to be fossilized tunnels bored by hungry blobs creeping through the mud on the floor of a shallow sea 2.1 billion years ago, about a billion years before animals evolved.

Those may have been similar to modern day slime molds — single-celled organisms that sometimes bunch together into a blob or “slug” to crawl in search of food, reports the international team led by Abderazak El Albani of the centre national de la recherche scientifique and the Université de Poitiers in France. They published their findings in the Proceedings of the National Academy of Sciences earlier this week. 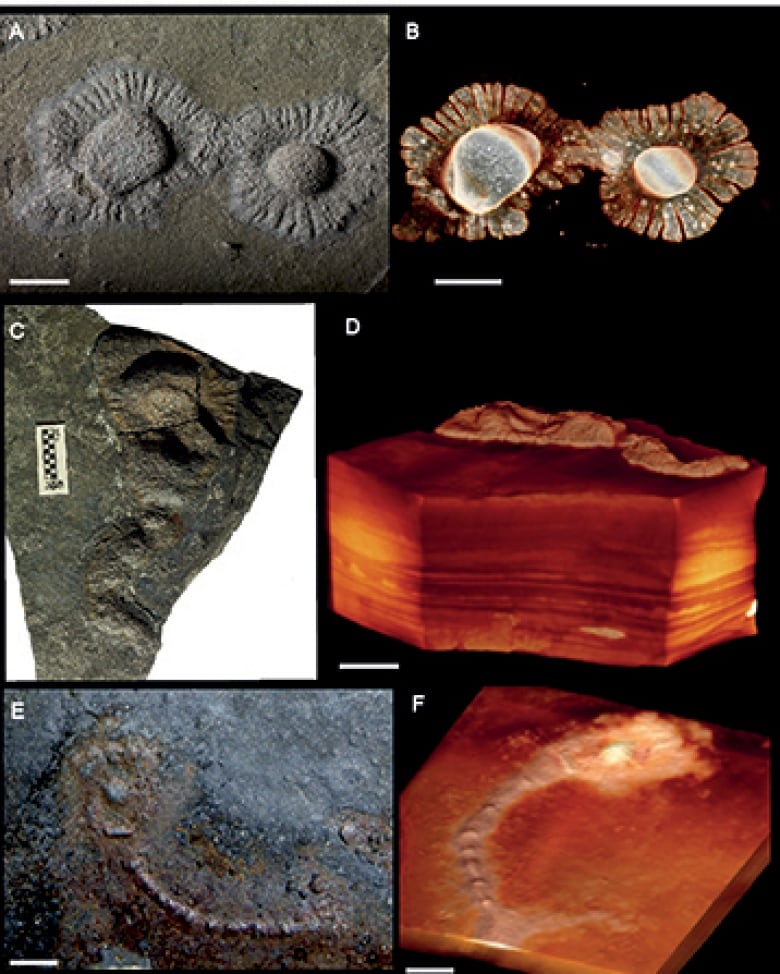 French researcher Abderazak El Albani proposed in a 2010 study that some of the fossils found in the same rock formation belonged to the earliest multicellular organisms — suggesting such complex organisms evolved hundreds of millions of years earlier than previously thought. (Abderrazak El Albani/CNRS)

The tunnels appear near and between thick mats of bacteria that may have made a tasty lunch, said Luis Buatois, a University of Saskatchewan researcher who co-authored the paper.

“That’s consistent with the idea of searching for food,” he added. He and his wife, fellow University of Saskatchewan researcher M. Gabriela Mangano, are experts in “trace” fossils. While most fossils we’re familiar with come directly from the bodies of organisms, trace fossils come from other evidence such as tracks or tunnels.

El Albani contacted Mangano and Buatois a few years ago for help figuring out the origin of strange worm-like cords of the mineral pyrite in some 2.1 billion-year-old rocks. He had found them snaking among fossilized bacterial mats in a rock formation near Franceville, Gabon, in Africa. El Albani shared detailed CT scans of the structures, some of which were as long and as thick as a pencil.

“We were immediately amazed by what he had,” Buatois recalled.

El Albani proposed in a 2010 study that some of the fossils found in the same rock formation belonged to the earliest multicellular organisms — suggesting such complex organisms evolved hundreds of millions of years earlier than previously thought.

What was striking about the worm-like fossils was that they seemed to cross different layers of sediment and appeared to have pushed the sediment around. That’s quite different from what’s seen in specimens that are dead or immobile when buried — they tend to sit in a single layer.

“We have evidence of organisms that were able to move. That’s significant,” Buatois said.

What was tricky was trying to imagine what kind of organism could have made the tunnels. They’re unusual, as they change in width along their length and sometimes fuse together from the same direction — impossible for a single organism such as a worm, but similar to the tracks left by slime molds made of blobs of cells that can join, separate and reshape themselves.

“The similarities are remarkable,” Buatois said.

While they may have been similar to a slime molds, they were almost certainly unrelated — slime molds didn’t evolve until about 1.5 billion years later.

The idea that the fossils were made by biological organisms is supported by geochemists such as Kurt Konhauser, a University of Alberta professor who also co-authored the study.

Organisms typically ooze slime as a lubricant as they tunnel through mud, Konhauser said. When the tunnel is later filled in with new sediment, bacteria eat that slime, producing a mineral called pyrite that’s otherwise only found in volcanic rock: “You don’t get pyrite unless you get bacteria eating organic carbon.”

And pyrite is what the worm-like features were made of.

What was striking about the cord-like fossils, seen in this 3D scan, is that they seemed to cross different layers of sediment and appeared to have pushed it around. That’s quite different than what’s seen in specimens that are dead or immobile when buried — they tend to sit in a single layer. (A. El Albani & A. Mazurier / IC2MP / CNRS – Université de Poitiers)

A big question that remains is whether the organisms that made the tunnels had a lasting impact on the evolution of living things.

Konhauser suspects they didn’t: “Most likely, whatever it was went extinct.”

That’s because it lived at a very special time in Earth’s history, shortly after photosynthetic bacteria evolved and filled the atmosphere with about half the concentration of oxygen we have today — way more than there was before.

That didn’t last, though. Oxygen levels soon plummeted and didn’t rise again significantly until around 650 million years ago, which is when multicellular life really took off and became obvious in the fossil record.

Evolutionary biologists think that means oxygen was a requirement for complex life. But then why did complex life not evolve the first time oxygen levels peaked?

“What this shows,” Konhauser said, “is that in fact, it’s quite likely that you did get complex life at that time.”

Not everyone is convinced that the fossils show evidence of multicellular organisms or organisms that could move.

Juergen Schieber, a geology professor at Indiana University who has studied how slime trails left by burrowing organisms get fossilized, called both claims “dubious.”

In an email, he agreed that organic matter would have been needed to form the pyrite cords, but suggested they were more likely to be rolled up bacterial mats.

Buatois said that was one possibility his team considered, but it didn’t seem to match up with the fossils’ positions relative to the layers of sediments.

“I know that it’s a controversial issue,” he said. “But we’ve been through every possible alternative explanation, and we rejected them all.”

The New York Times is looking to raise subscription prices