New subsidies for families and the elimination of interest on student loans were the big announcements in what was primarily a status-quo budget delivered by the B.C. government on Tuesday.

“We have a balanced budget across the fiscal board. We’re the only province with a AAA credit rating. But we will never have a truly prosperous province unless everybody can share in that prosperity.”

While James’ second full budget didn’t have the same blockbuster announcements such as the elimination of Medical Service Plan premiums or property speculation tax as her first budget, several new policies were introduced that build upon the government’s commitment to provide more funding to the less wealthy.

“The past government prioritized surpluses for the sake of surpluses. We’re investing in a blanketed approach,” said James.

Funding for families with children

The biggest new program is the B.C. Child Opportunity Benefit, which will give money to approximately 60 per cent of families each year, based on their income level and number of children under 18.

Beginning in October 2020, it will replace the Early Childhood Tax Benefit, which ends at six years of age, and will cost an additional $250 million each year.

“We really want to make sure we have the opportunity for every child to thrive,” said James. 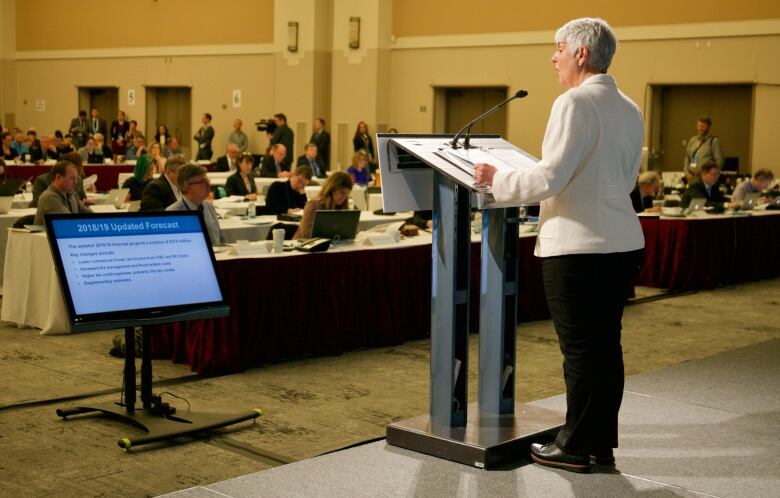 James fields questions from reporters on her budget in Victoria on Tuesday. (Mike McArthur/CBC)

“Anyone who’s raised a child knows how transformational that support can be. These kinds of dollars are going to make a significant difference in families’ lives.”

Other new commitments include a dedicated fund from gaming revenue for First Nations communities, an increase of $50 a month to welfare and disability payments, and new funding for foster care parents.

More money was also promised for modular housing — intended for areas where homeless camps come up — and further investments into clean energy programs. 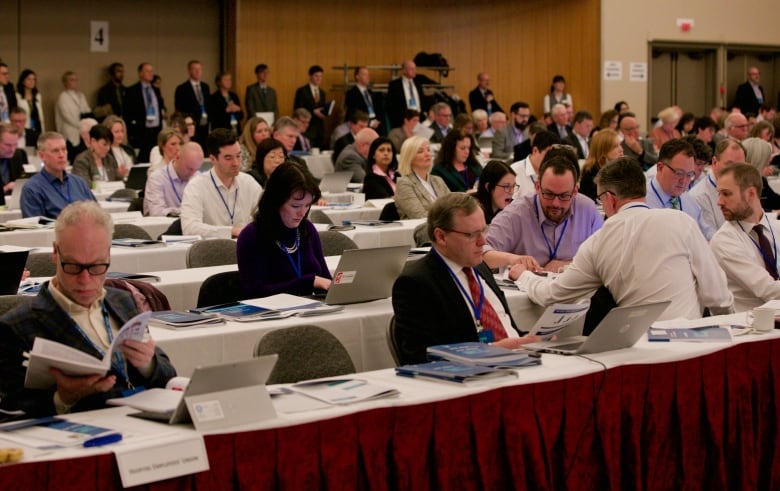 Business and labour leaders and representatives of other organizations impacted by the provincial budget study it prior to its public release. (Mike McArthur/CBC)

But the government’s forecasted surplus is predicated on a number of factors, including property transfer taxes remaining stable, wildfire costs going down after two record-setting years — and most crucially, reforms to the Insurance Corporation of British Columbia to eliminate the billion-dollar deficits the crown corporation has suffered the last two years.

At the same time, the government’s own budget documents said “there is a particular risk that changes to claims costs trend within ICBC, given recent volatility, will impact the corporation’s financial result.”

Reaction from the B.C. Liberal party was negative, as expected.

“The NDP don’t really have a plan to make B.C. a better place. They want to massively increase spending over the term of their government,” said Liberal Leader Andrew Wilkinson.

He was critical of the lack of tax relief in the budget and argued future budgets from the government wouldn’t be nearly as fiscally healthy.

“This is a government that’s treading water knowing that housing starts are dropping. Resource revenues are dropping, they say by 20 per cent. The world’s economy is slowing down dramatically, and they’re pretending it’s all going to be okay.”

However, the minority government’s ability to pass legislation has always rested on the continued support of the Green Party — and they had high praise for the budget.

“This is a good budget,” said Green Party Leader Andrew Weaver, who mentioned new funding and subsidies for clean energy programs and the elimination of student loan interest as specific areas his party pushed for.

“While we may not have done things exactly that they would like they did, overall we’re we’re pleased with the general sense of direction of this budget and we’ll be supporting this in the upcoming vote.”