As residents and commuters recover from Wednesday’s treacherous freezing rain, they’re seeing a familiar sight on Toronto’s roads and sidewalks.

Salt. Lots of it. Maybe even too much of it in some places.

Sure, it helps both drivers and pedestrians keep from slipping and sliding on slick surfaces.

But Anthony Merante, a fresh water conservation specialist for World Wildlife Canada, says excess amounts of salt are having a negative impact on local wildlife.

He says as the snow melts and turns to run-off water, thousands of tons of salt go with it, draining into the sewers, streams, and, eventually, Lake Ontario.

“It will start affecting fish, turtles, frogs, and then upper levels of the food chains,” Merante said.

He said the solution is simple: use less salt.

Studies show just using a small salt shaker would be enough to melt ice on a sidewalk slab, he added. 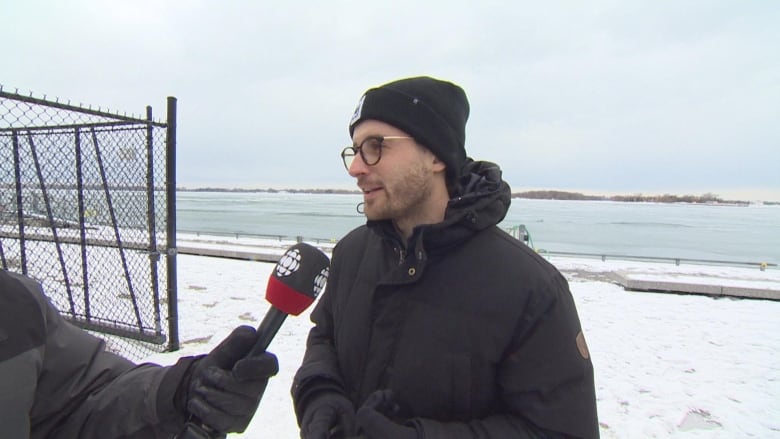 Anthony Merante, a fresh water conservation specialist for World Wildlife Canada, says salt will make its way from Toronto’s rivers and creeks, and will eventually end up in Lake Ontario. (Joe Fiorino/CBC)

Meanwhile, homeowners and contractors in Ontario are struggling to find road salt — the result of what many are calling an unprecedented province-wide shortage.

So how much is too much?

Mark Mills, the superintendent of road operations, says the city uses between 10,000 and 12,000 tons of salt to fight storms similar to the one that hit Toronto Wednesday — he says that’s typically the amount used when all 200 salt trucks are sent out.

“What we have to keep in mind is we will always err on the side of public safety,” Mills told CBC Toronto on Wednesday. 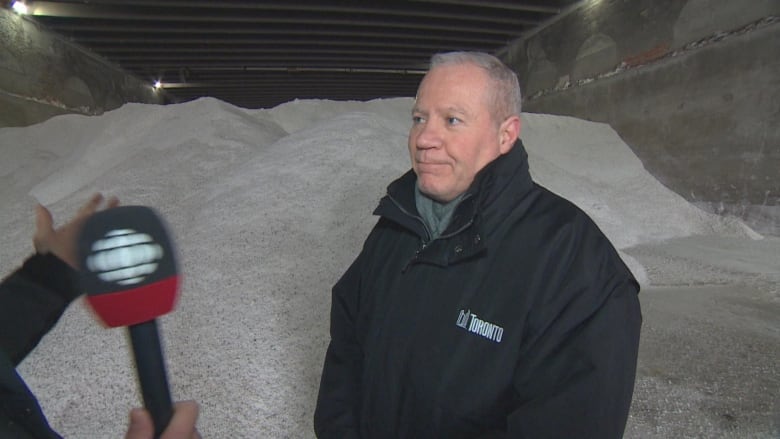 Mark Mills, the superintendent of road operations for the city, says public safety is the city’s primary concern. (Joe Fiorino/CBC)

To avoid overkill, he says each truck has an electronic control for spreading the salt, which caps at 100 kg per lane kilometre.

He says pedestrians, cyclists, and drivers should call 311 if they notice that a lane or sidewalk has been over salted.

“We often will see that there’s a little more salt than maybe is required — we need to know about that,” he said.

City, homeowners could be held liable

Mills says the city will apply whatever it can — plows or salt — until the pavement is bare, which is a mandated level of service set by council.

“We don’t want to be held in any type of liability,” he said. “We do understand that salt has an adverse affect to the environment, so there is a balance that we constantly have to look at.”

But it’s not just the city that can be overzealous with the salt, Mills said.

Property owners sometimes put too much down, as well, After all, they’re expected to clear off ice and snow from their sidewalk, and can use “whatever materials they see fit” to ensure they aren’t vulnerable to any sort of liability if a pedestrian is hurt.

One Toronto woman says she understands why some property owners would rather be safe than sorry.

“I think, just out of an abundance of caution, they put out a lot of salt,” Elizabeth Takasaki said.

Owners can be fined, or even sued, if someone slips and falls on their sidewalk. 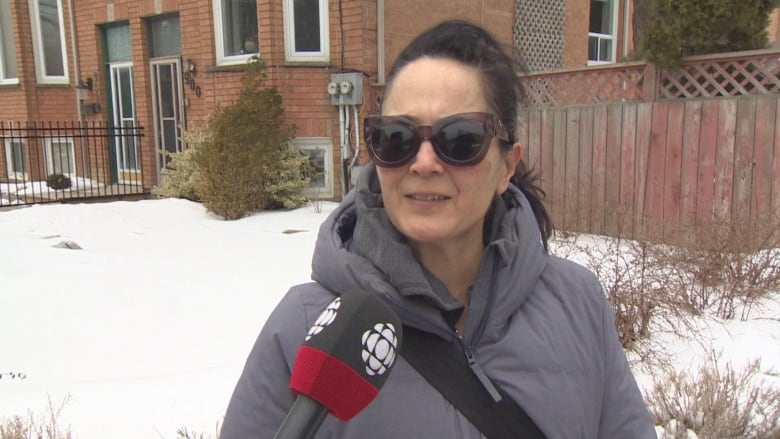 ‘If you fall because it’s icy, it’s the city’s fault,’ said Elizabeth Takasaki, on why the city could be held liable at icy TTC stops. (Joe Fiorino/CBC)

“Too much, far too much, it’s overkill,” said Shawn Draisey, when looking at the salt coating the cement near a King Street streetcar stop.

“There’s different ways to do this,” he told CBC Toronto Tuesday.

He says the people spreading salt on sidewalks either don’t know how to cope with snow and ice, or don’t understand the possible negative environmental impact.

“We’re in Canada and we’ve been doing this for a long time,” he said.