Canada’s most senior federal public servant says he is worried about the nation and the state of its political discourse — fearing it has sunk to such lows that it could lead to an assassination attempt during the next federal election campaign.

Michael Wernick, the clerk of the Privy Council of Canada — the man tasked with serving the prime minister and his cabinet — prefaced his testimony on the SNC-Lavalin affair with commentary on what he describes as a “vomitorium of social media” fuelled by unreasonable partisans who have been dangerously whipped up by politicians.

“I’m deeply concerned about my country right now and its politics and where it’s headed,” Wernick told the Commons justice committee today.

It is unusual for a civil servant of his stature to speak so candidly in such a public forum.

Wernick, a career public servant who has worked in senior roles under both Conservative and Liberal prime ministers, said he finds recent remarks by Conservative Saskatchewan Sen. David Tkachuk at a recent rally particularly distasteful.

‘I’m here to say to you that the Globe and Mail article contains errors, unfounded speculation and, in some cases, is simply defamatory,’ Wernick, Clerk of the Privy Council, said. 5:31

While addressing the “United We Roll” convoy of Alberta truckers who travelled to Ottawa this week, Tkachuk said, “I know you’ve rolled all the way here, and I’m going to ask you one more thing: I want you to roll over every Liberal left in the country.”

Tkachuk said that only then would two particularly controversial pieces of legislation — Bill C-48, the B.C. north coast tanker ban bill, and Bill C-69, the overhaul of environmental assessment legislation — be withdrawn.

“Because when they’re gone, these bills are gone,” he said.

While he didn’t mention Tkachuk by name, Wernick made it clear that he was directing his comments at the senator.

“I think it’s totally unacceptable that a member of the Parliament of Canada would incite people to drive trucks over people after what happened in Toronto last summer. Totally unacceptable. And I hope you, as parliamentarians, are going to condemn that,” Wernick said.

In a statement to CBC News, Tkachuk said that while his comments “may not have been as artful” as he would have liked, he will not apologize for them.

The Saskatchewan senator said Liberals have “manufactured outrage” over his remarks in order to distract from the government’s record on the oil and gas industry.

“When I said I wanted them to roll over every single Liberal, I meant it figuratively, not literally. I was referring to defeating every single Liberal in the upcoming election. I was not advocating violence and I think everybody knows that, except those for whom it serves a purpose to interpret them otherwise. Certainly the people at the rally knew what I meant,” Tkachuk said in his statement. 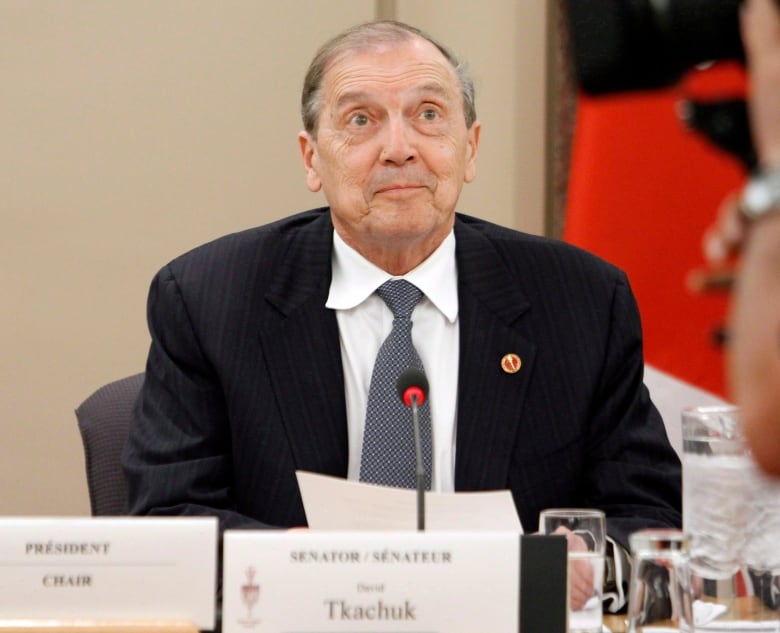 “I know you’ve rolled all the way here, and I’m going to ask you one more thing: I want you to roll over every Liberal left in the country,” Conservative Sen. David Tkachuk said at the United We Roll convoy rally in Ottawa, Ont. (Fred Chartrand/Canadian Press)

Wernick also took issue with the use of terms like “treason” and “traitor” to describe Prime Minister Justin Trudeau.

There were placards and signs at the “United We Roll” rally that accused Trudeau of treason over his perceived disdain for the energy sector and his government’s policies on immigration and asylum — policies described by some of those protests signs as embracing “open borders.” 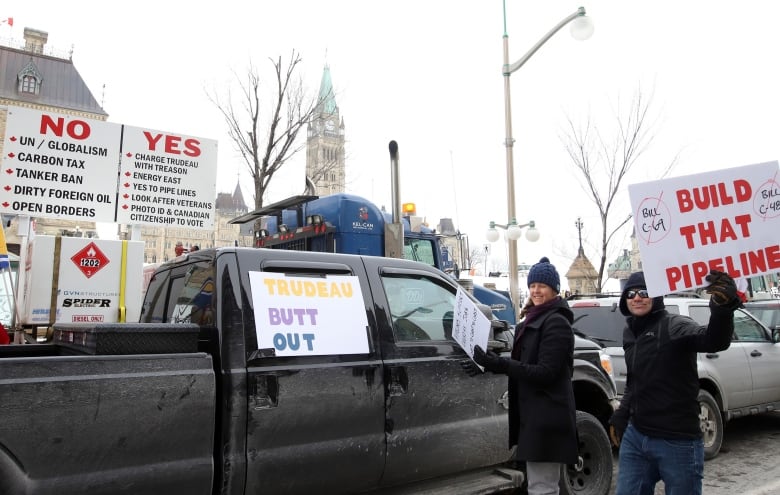 A protester stands below Parliament Hill in Ottawa, Wednesday, February 20, 2019. A convoy of angry Albertans and other westerners rolled up to Parliament Hill for a second day to protest federal energy and environmental policies. (Fred Chartrand/Canadian Press)

“I worry about the rising tides of incitements to violence when people use terms like ‘treason’ and ‘traitor’ in open discourse. Those are the words that lead to assassination. I’m worried that somebody is going to be shot in this country this year during the political campaign,” Wernick said.

The senior bureaucrat also defended Crown-Indigenous Relations Minister Carolyn Bennett against critics who have been claiming online that she’s ill-equipped to handle the Indigenous reconciliation file, saying nobody else in Canada has done more to advance reconciliation with Indigenous peoples than the Toronto-area minister.

Wernick said he also fears the SNC-Lavalin affair — and allegations published in the Globe and Mail that senior members of the Prime Minister’s Office inappropriately pressured former justice minister Jody Wilson-Raybould to cut a deal with the Quebec-based company so that it could avoid criminal prosecution —  will shake the faith of Canadians in their public institutions.

“Should Canadians be concerned about the rule of law in this country? No,” Wernick said.

“I’m here to say to you that the Globe and Mail article contains errors, unfounded speculation and, in some cases, is simply defamatory.”

Wernick testified Thursday he did not inappropriately influence Wilson-Raybould to pressure the director of public prosecutions to sign a deferred prosecution agreement (DPA) with SNC-Lavalin. Trudeau and his former principle secretary, Gerry Butts — who resigned this week in response to the allegations — have also denied any wrongdoing.

Conservative MP Michelle Rempel chided Wernick for his remarks Thursday, saying he overstepped in criticizing Conservative parliamentarians and the convoy.

“To any public servant watching Wernick — do not use him as your model on how to be a non-partisan professional,” she tweeted.

Rempel said his remarks were “purposely designed to deflect reporting” from the larger SNC-Lavalin matter. (The CBC News story about that portion of the meeting can be found here.)

Conserative MPs also have cited the prime minister’s description of them as “ambulance chasers” — for questioning the transfer of child-killer Terri Lynne McClintic to a Saskatchewan healing lodge — as an unfair partisan potshot.