The Coalition Avenir Québec government announced earlier this month it is discarding 18,139 unprocessed immigration files from skilled workers, the immigration program managed by the province, as part of sweeping changes to the way it takes in newcomers.

An association of immigration lawyers, known by its French acronym AQAADI, is seeking an injunction in Quebec Superior Court.

The group argues the provincial government must respect the existing rules — and continue processing applications  — until the proposed reforms are passed into law.

“For a week or more now, we’ve had hundreds of messages from people all around the world,” said Guillaume Cliche-Rivard, the association’s president.

“It’s very devastating for these people and what we’re asking is for the government to do their job on the basis of the law now.”

The CAQ says applicants will be able to reapply under the new system and be refunded the cost of their application.

Jolin-Barrette has said the new approach would better match applicants to the needs of the labour market, emphasize French-language skills and adhere to Quebec values.

Ho Sung Kim, another lawyer with the AQAADI, called the government’s decision to throw out the old applications “irresponsible” and said it will leave thousands of families in limbo. 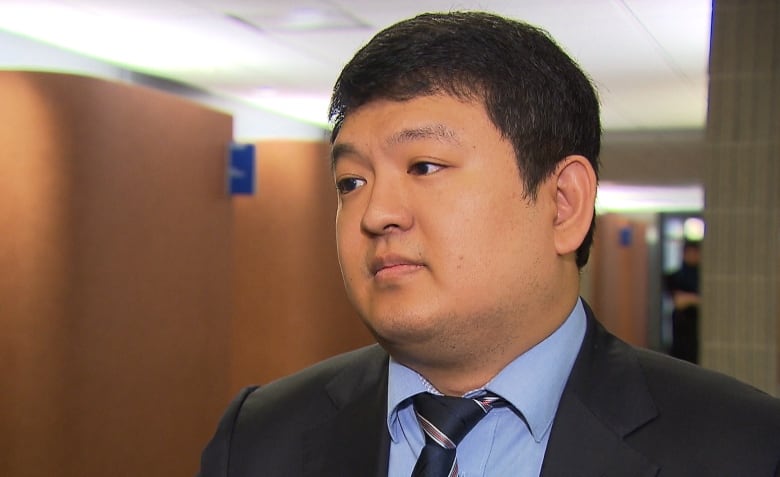 Ho Sung Kim said some of the people whose applications were thrown out put a lot of time, energy and money into coming to Quebec. (CBC)

The court challenge was filed on behalf of Seeun Park, a trained nurse from South Korea who has applied to settle in Quebec as a skilled worker.

The AQAADI presented three additional affidavits detailing the consequences the policy has had on other prospective immigrants, some of whom have been waiting to come to Quebec for more than a decade.

Prospective immigrants, including Park, have already received a notice saying their applications will no longer be processed.

A number of groups, including unions, business groups and the Canadian Bar Association, have lined up against the CAQ’s plan.

The Conseil du Patronat, which represents Quebec’s biggest businesses, said it “undermines Quebec’s credibility on the international scene and reinforces cynicism about our immigration system.”

The Quebec chapter of the Canadian Bar Association sent a letter to Jolin-Barrette, saying it considers the move illegal.It said cancelling the applications “tarnishes Quebec’s image among the applicants it seeks to attract.”

Guillaume Cliche-Rivard is the president of the association of Quebec immigration lawyers (AQAADI). (Radio-Canada)

Jolin-Barrette declined to comment Thursday on the bar association letter and said the government will defend itself in court.

The CAQ’s promises to cut the number of immigrants and introduce a values test for new arrivals were key to their election campaign last fall.

The government tabled a plan last December to reduce the number of immigrants Quebec accepts this year to 40,000, down from more than 50,000 last year.

The immigration cuts have raised concerns from businesses already facing a labour shortage.

Government lawyers are expected to present their arguments this afternoon.

The City of Ottawa is about to have a second marathon debate about where to allow future suburbs to be built, and this time staff propose hemming in development by creating what’s being dubbed the “gold belt.”

Eight months after city council decided to expand the urban boundary by 1,281 hectares to help house a growing population, senior city planners have released the map of which properties should be developed — and which property owners stand to see values soar if their lands are rezoned.

They include areas north of Kanata on March Road, near the future Bowesville O-Train station in the south end, and at the southern edge of Orléans.

Scoring rural properties on such things as how close they are to transit and how costly it would be to build pipes and roads proved a challenge over the past several months, however.

“The easy land has been gobbled up in years past, in previous boundary expansions,” said Coun. Scott Moffatt, who belongs to a group of councillors that meets about the new official plan. “So now we’re looking at those leftover pieces and where we can [grow], knowing council was clear we would not be touching agricultural lands.”

Staff struggled to come up with all 1,281 hectares council approved adding in May 2020 because they had too many issues with “sub-optimal” lands.

Instead, they recommended converting 1,011 hectares of rural land to urban for now to meet provincial requirements, and then spending the next five years studying three options for making up the 270-hectare shortfall.

That opens the door to creating an entirely new suburb.

For instance, one option involves a huge parcel near the Amazon warehouse southeast of the city where the Algonquins of Ontario envision a community of 35,000 to 45,000 people called Tewin, which they would build with developers Taggart.

OTTAWA — You may sometimes feel winter drag on, but one Ottawa woman is not letting that dim her creativity.

Dr. Mary Naciuk is family doctor and rural emergency room physician. She spent some of her free time this weekend building a majestic snow dragon in front of her south Ottawa home.

“It’s just fun to get outside and do something creative,” she told CTV News on Sunday.

There was plenty of snow to use, after Ottawa saw a record 21 cm of snow on Saturday.

She said that after her husband cleared the driveway, the pile of snow left behind lent itself to being turned into a magnificent dragon, but it takes more than just the right kind of snow to make a sculpture like this.

Naciuk tells CTV News a shovel, a butter knife, a spoon and even a blowtorch were used to give the dragon its sharp edges and defined scales.

“Anything pointy with a small detail is really hard to do with just your fingers or the butter knife and spoon I was using, so (the blowtorch) just makes a fine point,” she said.

Her son tweeted about it on Saturday and Naciuk says many people have stopped to take a look.

“A lot of people stop on their way to the ice rink and have a look and take pictures. It’s kind of fun,” she said.

It was a welcome relief to spend some time working on something creative outdoors, Naciuk said.

“Get outside, get some exercise, clear your mind, do something that is not COVID for a few hours. It obeys all the rules. It was great,” she said, adding that the dragon took her about five hours to build.

She’s been on the front lines of the COVID-19 pandemic for months.

“It’s been a steep learning curve. It’s been exhausting,” she said. “A lot of the time is learning how to deliver care to people and maintain all the precautions that we need to. That’s been hard. A lot of people are not able to work from time to time, so we fill a lot of extra shifts. It’s been a lot more hours of work than it used to be, that’s for sure.”

Naciuk returns to work on Monday after a weekend of respite but says if the conditions are right—a nice mild day, a good snowfall, and some free time—another sculpture may well appear.

OTTAWA — The rollout of COVID-19 vaccines in Ottawa continues, but there are questions about supply. How are police and bylaw handling the new stay-at-home order? And, a day of prayer for a beloved spiritual leader.

CTVNewsOttawa.ca looks at five stories to watch this week.

Residents of Ottawa will continue to roll up their sleeves for COVID-19 vaccines but there are new questions about how much supply the city will have.

Last week, it was announced that Pfizer would be cutting shipments of its COVID-19 vaccine to Canada in half over the next month because of an expansion of its European factory. That means it’s unclear how many additional doses Ottawa will be receiving in the coming weeks.

On Saturday, Mayor Jim Watson told the CTV News at Six that between 5,800 and 6,000 doses were expected in the city on Tuesday, but now he’s unsure if that will be delivered.

The City’s vaccination teams have visited all 28 of the city’s long-term care homes and are expected to begin working with residents and staff of the city’s high-risk retirement homes soon.

It has now been three weeks since the provincewide shutdown began in Ontario and it remains to be seen if Ottawa’s curve will start to bend toward lower rates.

The number of active cases of COVID-19 in Ottawa more than doubled in the first two weeks of January and the number of people in hospitals nearly quadrupled. However, the number of new cases per 100,000 residents over a seven-day period has been slowly dropping in the past few days.

It is still too early to tell whether the stay-at-home order that came into effect on Jan. 14 has had any effect on transmission.