A walnut-sized bee with a massive jaw and impressive wingspan has been spotted for the first time in nearly 38 years.

A female of the species was photographed and captured on video in the North Moluccas islands of Indonesia in January, the Global Wildlife Conservation Society announced this week.

A small expedition found the bee in her nest in a termite mound up in a rotting tree, where it’s thought she was raising her young, said Clay Bolt, an American nature photographer who was on the expedition. 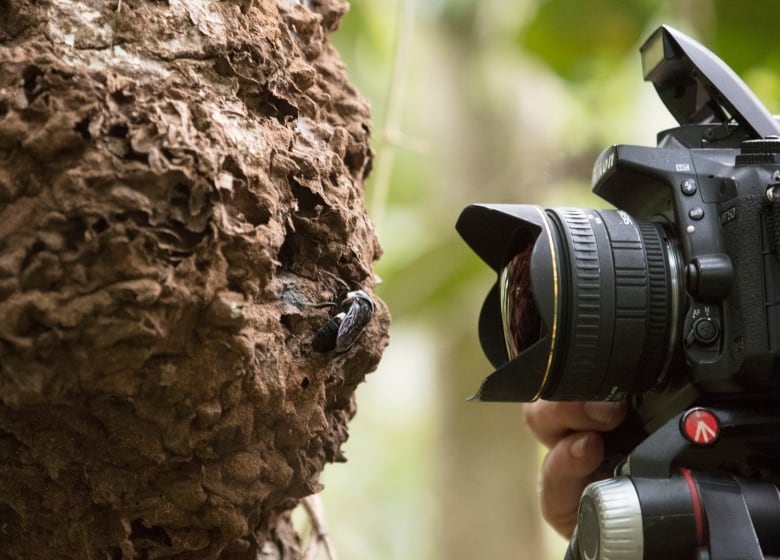 Natural history photographer Clay Bolt takes the first ever photos of a living Wallace’s giant bee at its nest, which is found in an termite mound in the North Moluccas, Indonesia. (Simon Robson)

The bee was first spotted by Iswan, one of the team’s two Indonesian guides, who had noticed a termite mound with a whole that was “very round, and just the size a giant bee might use,” Bolt wrote in a blog post about the discovery.

At the team’s request, Iswan climbed up to investigate and quickly jumped down when he saw the movement of what he thought could be either a snake or a bee. He was followed by American Museum of Natural History entomologist Eli Wyman, who confirmed the hole definitely looked like the nest of a Wallace’s giant bee.

Bolt went up next and directed his headlamp into the hole.

“I saw the bee’s face looking back at me,” he said in an interview with CBC News. “It was an extraordinary moment.”

The team spent two hours waiting for the bee to emerge. Eventually, they tapped her gently with a blade of grass “and she just walked right out,” Bolt said.

Prior to that, there had only been two scientific reports of the species. The first from Alfred Russell Wallace, the bee’s namesake and an entomologist who independently developed the theory of evolution by natural selection at the same time as Charles Darwin. And the second sighting was by American entomologist Adam C. Messer in 1981, who found six nests in the same group of Indonesian islands.

Even locals said they had never seen the bee when Bolt and the team arrived and began asking about it. 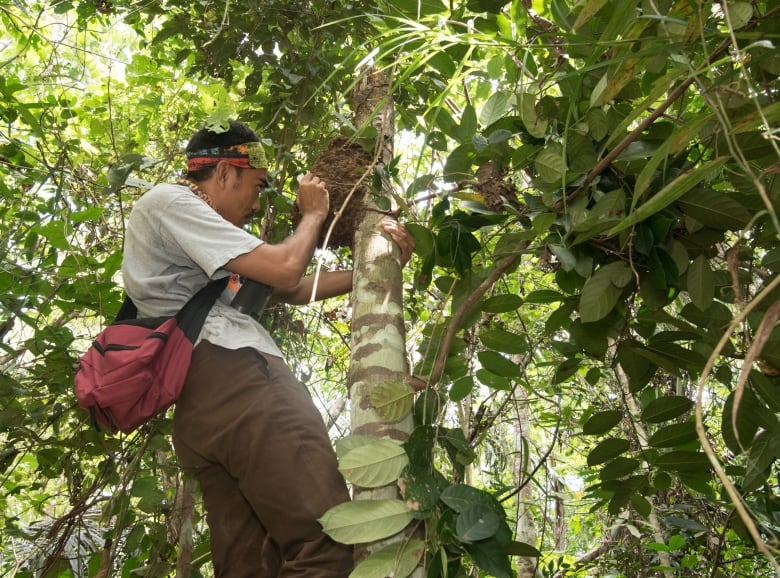 Still, there was good reason to believe that the bee still existed, as dead specimens had turned up for sale on places like eBay. One sold last March for $11, 975 ($9,100 US).

Bolt became captivated by the bee about four years ago after he was shown a specimen by Wyman at the American Museum of Natural History while doing background research for a project that involves photographing native bees across North America.

A couple of years ago, Bolt and Wyman successfully lobbied to have it added to the Global Wildlife Conservation Society’s list of “25 most wanted species” as part of its Search for Lost Species program. The program aims to find plant and animal species that haven’t been spotted for years or decades. 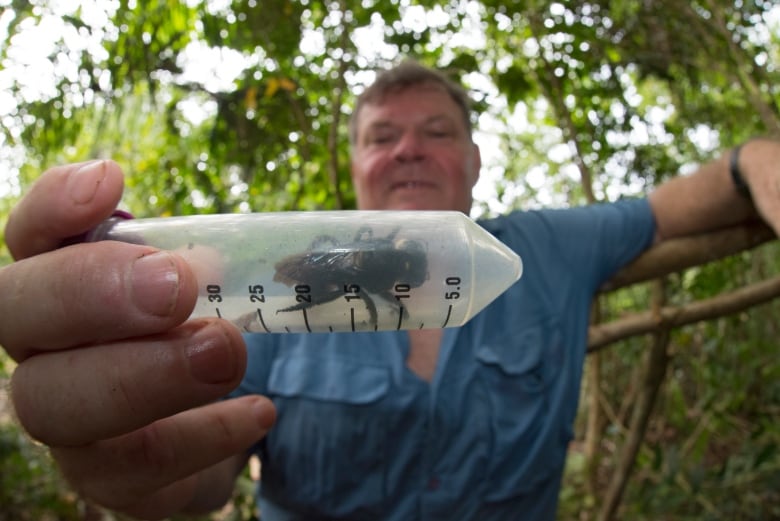 The four ended up organizing the expedition together, but Chilton fell very ill after a couple of days and had to leave Indonesia.

The team found the bee about four days later, but were unsuccessful in finding other specimens over the next two weeks.

3rd ‘most wanted’ species to be found

The bee is the third of the “25 most wanted species” to be reported found since the list was released in 2017. The news follows the announcement earlier this week that the Fernandina Giant Tortoise was found alive in the Galapagos Islands.

The first lost species found was Jackson’s climbing salamander of Guatemala in 2017. The publicity surrounding its rediscovery helped fund the creation of a reserve to protect its habitat, said Robin Moore, who leads the Global Conservation Society’s Lost Species program.

He hopes to get a similar result for Wallace’s giant bee, which is currently unprotected.

Despite the fact that it is rarely spotted, it’s only listed as “vulnerable,” not “endangered,” by the by the International Union for the Conservation of Nature. Moore suspects that’s because its habitat still exists, dead specimens are still being traded, and there isn’t enough data to confirm how many there are.

“We’re hoping that this will help shine the spotlight and help us [fund] follow up expeditions to determine its status,” Moore said, “and hopefully catalyze conservation actions — protection of habitat, but also protection of species against the trade.”

Smile: Some airliners have cameras on seat-back screens